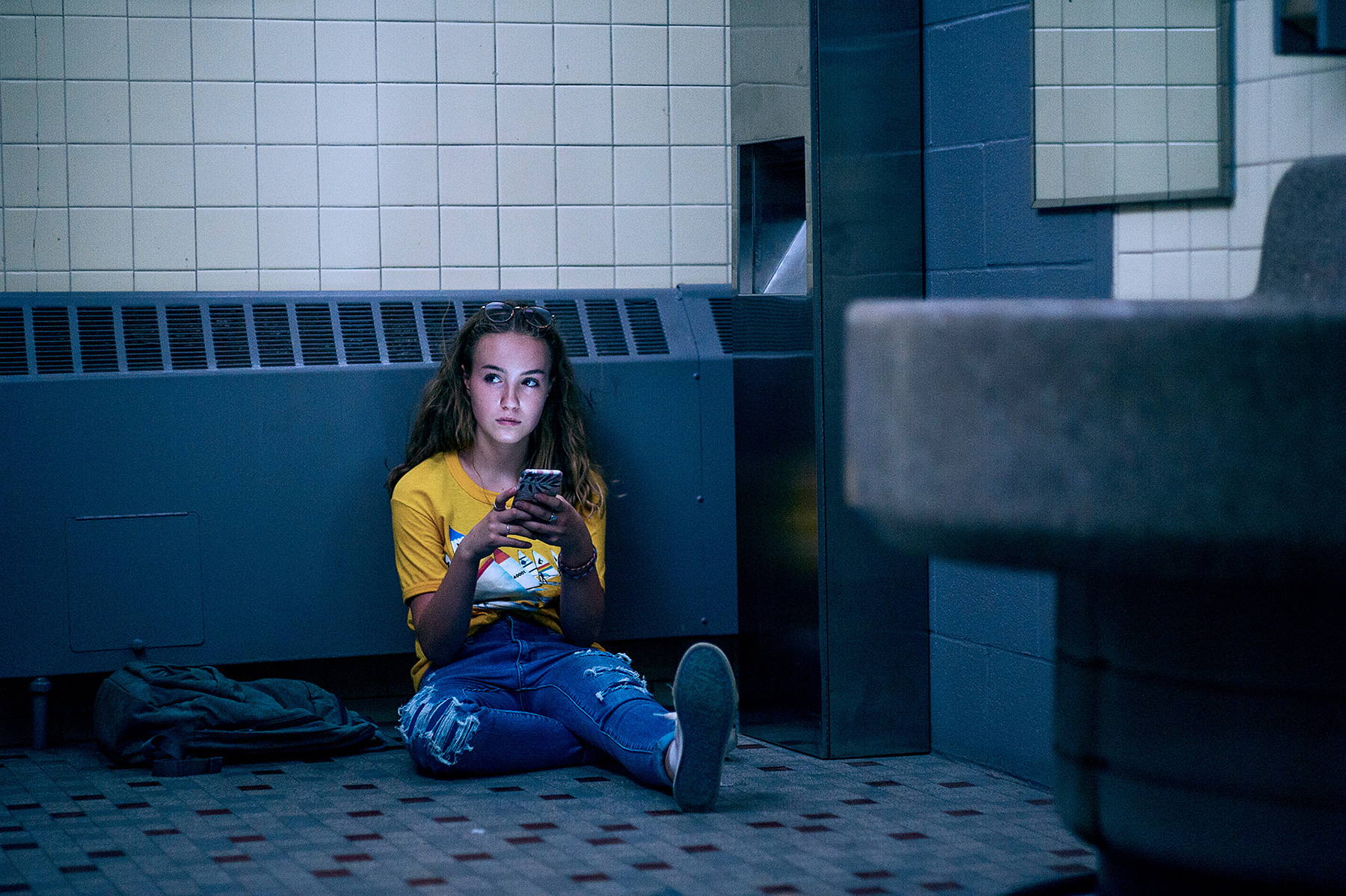 It takes a village. That’s what close, tight-knit communities like Sainte-Adeline, Quebec, say when asked how they can confront and conquer tough circumstances. With that sense of togetherness, however, comes a cliquish sensibility of superiority. They survive because they have each other. They survive because they’re vigilant and always watching to see where and when their help is required to pick someone up. It’s how they got through a horrible construction-site tragedy years prior that claimed too many friends and families’ lives. They picked up the slack, opened their homes, and came out the other side. It’s also how they vindictively turned thirteen-year-old Magalie Jodoin’s (Emilie Bierre) life upside-down upon discovering she was too far along with an unplanned pregnancy to terminate.

Director Jeanne Leblanc and co-writer Judith Baribeau pull no punches in portraying the malicious underbelly of the town at the center of Les nôtres. While these citizens banded together after suffering from the same transparent loss—the victims, survivors, and shoulders were known the moment it occurred and subsequently played their unique roles en route to fundraising a memorial park that could serve as their communal closure—Magalie’s situation was different. Her “indiscretion” was private. It was a secret her refusal to reveal the father’s name kept hidden. Everyone is thus left to manufacture the villain themselves. Some choose Magalie by calling her a whore. Some blame her mother Isabelle (Marianne Farley). And others pick the boy they think shattered their hard-fought utopia.

Why do the latter pick Manuel (Leon Diconca Pelletier)? Because he’s a “foreigner.” The mayor (Paul Doucet’s Jean-Marc Ricard) and his real-estate-agent wife (Baribeau’s Chantale Grégoire) adopted Manuel and his younger brother (both Hispanic) two years ago, and their very white neighbors have questioned the decision ever since. It doesn’t matter that the teenager is a star soccer player when teammates lob ethnic slurs his way. It doesn’t matter that he’s a good kid who considers Magalie his best friend when nosy passersby are ready to admit the “other shoe” is bound to drop, regardless of evidence. He’s an “other.” And Magalie joins his ranks the second she starts showing because teenage sex is no longer “cool” when it comes with the “shame” of pregnancy.

If only they knew the truth. We know it as soon as Magalie lifts her shirt in front of the mirror. The opening scene at a party announcing the aforementioned park is full of the sort of camaraderie that must be hiding some skeletons. Isabelle and Jean-Marc are very close, despite Chantale being right there and Magalie’s eyes seem to be peering at the older men in attendance rather than the boys her age. Talk of support is the perfect façade to cover indiscretions and a town-wide event is the perfect place to pretend none exist. But the truth is irrefutable, the psychological torment, the grooming, and the emotional abuse undeniable. And Magalie’s “love” for her baby’s father is enough to ruin lives in pursuit of it.

Les nôtres is going to ruffle plenty feathers. Not because of its topic but because of its willingness to depict a story full of characters that will stop at nothing to keep pretending. I wouldn’t be surprised to find out that Leblanc and Baribeau have it in the back of their heads that Ricard was somehow responsible for the construction accident and that the victims’ families simply refused to pursue criminal charges because that’s not how they handle in-house drama. They deflect, put on a smile, and move on. They keep tabs on insiders and scowl at outsiders. They turn blind eyes onto the truth in order to live the lie that keeps them affluent, insular, and opportunistic. And Magalie is learning how that game isn’t for her.

She has no allies in that respect, though. The father of the baby is manipulating her. Her mother is finding it difficult not to make things about herself and how the added stress (and presumed responsibility to raise the child) is making her career impossible despite being the sole breadwinner after being widowed. And her friends have all turned on her (with help from her justifiable frustration about everything going on). Everyone has picked this life and agreed to the price that maintains it. Manuel is the only one who hasn’t assimilated, but Magalie can’t confide in him, for soon-to-be obvious reasons. The only thing she can do is throw him to the wolves when it benefits her goals and regret the choice when it doesn’t.

She’ll regret many things by the end—the least of all being the thought that anyone in Sainte-Adeline had her best interests at heart. (I don’t think Guillaume Cyr’s social worker Patrice is local.) It’s a harsh and complex reality that leads multiple emotionally tense exchanges towards a denouement that has you guessing whether it’s a flashback or epilogue, thanks to the visual centering of Bierre’s flat stomach. And with it is a very stark demarcation of sides that will only surprise those too naïve to believe humanity’s capacity for putting “normalcy” above escape. It’s only then that the single word “Leave,” shared by Chantale to Magalie (Baribeau and Bierre are absolutely fantastic throughout) makes full, terrifying sense. Because there’s no second chances once it consumes you whole.