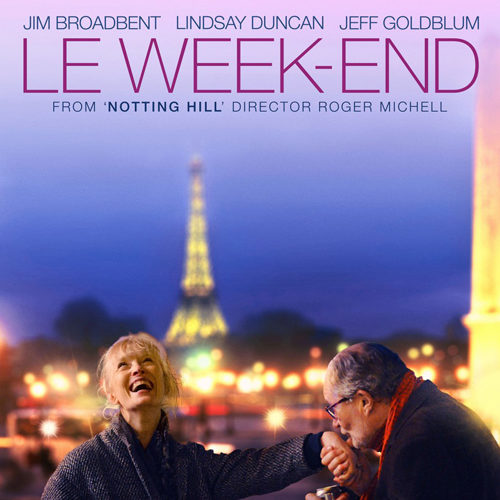 Children are our legacy—our immortality. We sacrifice everything to raise them in our image, hoping for the best until they’re set free as fully formed adults ready to continue the cycle. And through our rosy-colored glasses of optimism we assume the journey ends happily in a successful second act for them and a well-earned third unencumbered by anything but love and adventure for us. Sadly, however, such broad ideas often prove little more than fantasy as decades spent in the daily grind of servitude to the system while playing second-fiddle to the children you say are the reason for it all leave you shadows of who you were. You become someone different, wonder if a return is possible or desired, and face the ugly truth that your kids may have been the only things keeping you together. This is the authentic depiction of warts-and-all-love screenwriter Hanif Kureishi and director Roger Michell have chosen for their fourth collaboration, Le Week-End. Centering Nick (Jim Broadbent) and Meg Burrows’ (Lindsay Duncan) thirtieth anniversary, the film takes us on a vacation of the heart far from home, responsibility, and the censorship of feelings a lifetime of regret in Birmingham, UK has provided. The couple appears at first to be your run-of-the-mill lovers comfortable in their own skin reading on the train, laughing at each other’s shortcomings, and ready for an injection of fun and excitement. The inevitable cracks soon appear, though, once their hotel—the same one as their honeymoon—proves anything but the Parisian romance of their memories. Her disdain and his sarcasm expose frayed nerves we now understand this trip was taken to repair.

What follows are the ebbs and flows of emotions, indifference, accusation, and laughter their newfound freedom lets loose. We recognize their personality traits—his doting, lovesick puppy and her demanding yet passionate search for rebirth; watch as a phone call from their son sets him off giggling and compliant while her smile turns to a scowl in the knowledge she may never escape the burden of motherhood that’s become more charity than love; and witness the lack of physical contact between them probably sparked by years of long days and fatigued nights exacerbating into anxiousness and fear. Paris therefore provides the romantic backdrop with which to rekindle the flame or perhaps just as easily unmask how different they’ve become. It’s either a new start or the beginning of the end. No one said love was easy. The filmmakers do a wonderful job at never making the story feel manipulated or trite. Every blowout doesn’t simply become some powder-keg explosion that needs an equally massive exchange of heart to overcome, but instead lies in the realism of quick transitions. One misguided word or phrase causes an outburst to shut the other one up, earn a comical retort, or lead to the changing of subjects in a credible display of deflection. One is always trying too hard while the other is lost on an island each gut-punch pushes farther away. Only when accidental physical abuse or suffering results do Nick and Meg instantly transform into the compassionate souls we know they are because neither wants to truly hurt the other, yet it seems they must in order to show exactly what it is they’re feeling.

It all comes to a head when they serendipitously run into Nick’s old friend from Cambridge, Morgan (Jeff Goldblum). Invited to a party he’s throwing the next night, they agree to go before a brilliant exchange of sexual frustration and long-harbored, vile assumptions erupt as they dress. The subsequent sequence fantastically provides us with laugh-out-loud humor and painful worry as their argument continues into the stairwell of Morgan’s home before turning on a dime to faux civility at the sound of his voice. There’s something so relatable to this constant juxtaposition of public and personal space throughout as they figure out or ignore what’s appropriate to say due to the language barriers of Paris or the social etiquette of a friend’s invitation. Truth often must be spoken without worry of repercussion or ridicule to be heard. Le Week-End is at its best when neither Nick nor Meg can contain their anguish. Sometimes that frustration leads to one escaping the other for isolation, a hilariously unplanned adrenaline rush of a dine and dash, or the cold hard realization that they may return home to England two separate pieces rather than a whole. For every genuine kiss in the street comes a bile-filled need for space; every worry about finances dissolving into charging whatever they can to their hotel room, consequences be damned. And the obvious comparison to Morgan’s successful career providing him a resentful son and a new wife to make the same mistakes with can’t help start you wondering what love truly is. As Nick says early, “You can’t not love and hate the same the person—sometimes in the span of five minutes.”

The film hits the mark on couples struggling to find that balance between individuality and union with Broadbent and Duncan providing pitch-perfect performances of long-time partners constantly trying to diffuse situations in a way that only makes half or more worse. They say they love each other, sheepishly accept the distance separating them, and try to reconcile their differing images of the future, but after thirty years you can’t blame them when everything starts to appear like they’re simply going through the motions. This new Parisian venue affords them the space to be alone with one another and think about whether or not they can, but even their obvious chemistry is no longer enough to sustain if they cannot satisfy the other’s needs. However, only by admitting what those are can they ever know for sure.