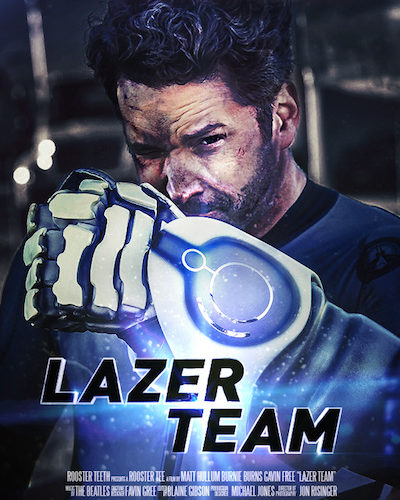 The endless list of Indiegogo backers appearing towards the end of Lazer Team‘s credits make clear that the movie will not be wanting for fans, since it was they who mostly helped fund this science fiction comedy. So the question is if this film will strike a chord with audience members unfamiliar with Austin-based production company Rooster Teeth, the creative minds behind the film? In their first-feature length project, the comedic troupe, best-known for their video-game-based web series Red Vs. Blue, have created a product composed of the elements that make them a bonafide YouTube sensation: effective, low-budget visual effects, bro-ish jokes, and a self-aware love of geekdom that’s completely free of cynicism.

Lazer Team relies on the iconic “Wow! Signal” to tell the story of a group of underdogs who become the planet’s only hope for salvation. The premise establishes that the signal discovered in 1977 was a message from an alien civilization warning humankind of an imminent invasion, and the promise to send a “suit of power” to aid in the eventual battle. Upon receiving the message, the American government begin preparations by grooming an alpha male, appropriately named Adam (Alan Ritchson), to wear the suit and save the planet. The government’s plans are thwarted by four goofballs (Burnie Burns, Gavin Free, Michael Jones, and Colton Dunn) who accidentally shoot down the spacecraft containing the suit, and each don one of its pieces.

Forced to work together as a team, even though they have absolutely nothing in common other than their unexpected “close encounter,” the so-called “Lazer Team” set out to prove to the universe that heroes don’t need to come in blond packages with massive biceps and perfect abs. Directed by Matt Hullum, who co-wrote the screenplay with Burns, Chris Demarais and Josh Flanagan, it borrows the spirit of a dozen other underdog flicks in which out-of-shape everymen save the world, but what’s fascinating about Lazer Team is that it’s actually not so much a movie about nerds battling aliens as it is a movie about how anyone can make a movie about nerds battling aliens.

Aware of the role of social media in the democratization of filmmaking, there are countless instances in the plot where social networks (e.g. Instagram and YouTube) determine the next step the heroes will take. Their very name is given to them on social media and only becomes official as it spreads beyond their control. By showing how people who support the underdogs online help give them a sense of self, the filmmakers are recreating how their very film was made, creating a meta experience that might not be completely cinematic, but is certainly engrossing from a sociocultural aspect. While Lazer Team might not be the most original of sci-fi comedies, it possesses the kind of self awareness — and unabashed love of genre that other films try to pass off as “homage” or “ironic referencing” — that make it quite impossible not to root for it to succeed.