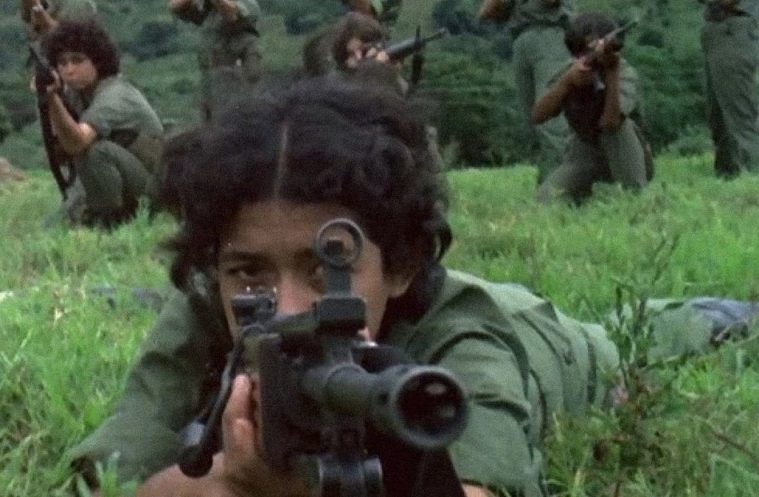 In the spring of 2002, I went on a school trip from Honduras to Nicaragua. My classmates and I, all middle class 16- and 17-year-olds, spent a decadent weekend at an exclusive resort off the Pacific Ocean where we were treated to food and drinks by the pool, nightly entertainment, and more luxury than any teenager needs. But it’s not the trip itself I remember best, but rather a strange event that happened on our bus ride back home. At one point on one of the rural roads, as we lounged and took naps in our air-conditioned vehicle, we noticed two groups of children straight ahead–one on each side of the road–who, as the bus approached proceeded to lift a rope being held by each side meant to stop the bus.

This was the children’s method to make drivers take notice of them. Once the vehicles stopped moving they’d proceed to ask for money, clothing or food, and wait for the next car to approach–the world’s most heartbreaking toll booth. Our driver warned us to hold on to our seats, declaring he wouldn’t stop for the kids, and as he stepped on the gas, the children who were already holding the rope up jumped towards the grass to avoid being run over. I will never forget the laughter inside the bus, as many of my classmates cheered about having overcome this obstacle.

Watching Jenny Murray’s documentary ¡Las Sandinistas! my mind kept going back to those children. I wondered if their lives had improved in any way, or if they were still alive for that matter. Because concealed within Murray’s film about the female members of the Sandinista National Liberation Front (FSLN) there is also a story about how generations of children in Nicaragua, and most Central American countries, have been denied the opportunity to be children who make it into adulthood.

¡Las Sandinistas! opens with recollections from Dora María, who explains her household was not traditional, and that her parents encouraged their daughter to be whatever she wanted to be. It was women like Dora María, Daisy, Gioconda, Olga, Claudia, and Sofía who took notice of how Anastasio Somoza Debayle’s dictatorship had gone beyond being an ideological threat, to become a regime that was murdering infants.

Dora María became the poster woman for a movement that forced women to take up arms, leave their homes (women were supposed to stay home in the kitchen and weren’t even allowed to work) and demand change, as they saw the rich becoming richer, and the poor being eradicated through hunger and disease. Murray showcases the indifference of the regime with a clip of Somoza being interviewed by an American journalist and nonchalantly declaring in perfect English (he’d been educated in the United States) how rich he was, and how much more wealth he was accumulating.

With the high energy of a recruiting video, set to upbeat rock music, Murray shows the ways in which these women’s work began a social change that overthrew the dictatorship. Dora María is shown in historical footage looking like the epitome of female badassery, her head always held up high, her speeches concise, temperate and rousing, her stance the one of someone lacking any fear because they knew they were on their rightful mission. At one point I realized I was so excited about all the work done by these women that I forgot everything I knew about Nicaragua today. How did the country go from becoming an almost utopic socialist nation–with incredible levels of literacy, cultural reform (the national cinematheque opened during the revolution) and hopes of equality–to become the poorest nation in the region?

Enter Ronald Reagan, who as Murray explains aided in the erasure of ¡Las Sandinistas! (literally translated as the female members of the Sandinista party) through American military interference in the region in the 80s. Reagan’s support of the Contras, through arms sales to Iran meant to help fund them, sent the country into a downward spiral from which they haven’t fully recovered. Under the Contras, Nicaragua entered a period of terror, filled with barbarism, human rights violations, and the destruction of infrastructures like schools and hospitals built by “rebels.”

While ¡Las Sandinistas!‘s tonal changes and upbeat editing are sometimes offputting given what the images are showing, it succeeds as a feminist revision of Nicaraguan history. So much of the content in the film is missing from education programs in Central America. Even though I grew up next to Nicaragua, I know more about the American Revolution than I do about the Sandinistas and Somoza’s dictatorship, and for that itself I’m grateful to Murray for her efforts.

It’s perhaps this need to show so much of what we don’t know that makes the film less successful aesthetically. At times it feels like a cascade of information with very little time for viewers to process it. A noble endeavor by all means, and perhaps an invitation for us to return to it, and do our research. In contemporary interviews, Murray frames the surviving female Sandinistas as elderly women surrounded by nature and books. You can see the flame in their eyes as they recall all the change they provoked and the sadness when they reflect on how quickly people forgot who they were.

As American news channels obsess with the non-threat of the “migrant caravan” seeking refuge in the U.S., ¡Las Sandinistas! arrives as a perfect piece to contextualize why it is these families are fleeing the places where they were born, and the responsibility America has to them. I wonder how many of the children I saw back in 2002 are desperately trying to escape poverty and crime. If it weren’t for the military intervention and support of dictatorships and right-wing governments, we might not be watching ¡Las Sandinistas! as a historical artifact, but as an example of how necessary female leadership truly is.