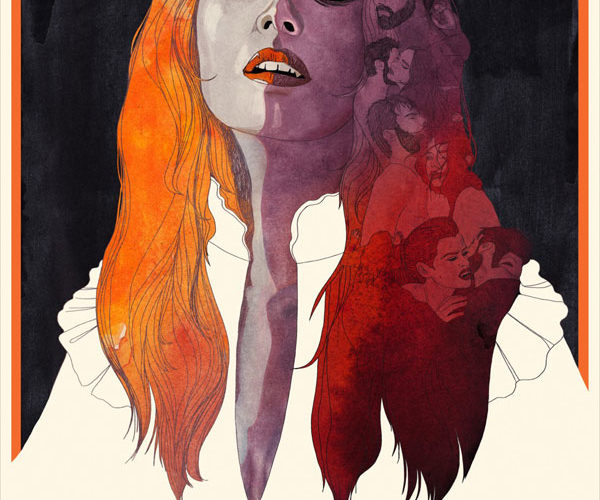 [Review] Kiss of the Damned

Sexual politics and genetic legacies are on the menu, backing a tale that bathes itself in all of the genre indulgences formed by its lurid ancestors. These vaunted predecessors include the work of Brit horror studio Amicus and Jean Rollin, who never met a voluptuous bloodsucker he couldn’t douse in amber lighting. Mostly these vampires fight the urge to feed, but when they do, Cassavetes reveals her other inspirational source; Italian giallo movies. The end result is a film short on actual scares, but big on atmosphere and psychological tension and swimming with fake blood. Fans who thought this sort of thing went out of style with the death of VHS will be well pleased.

Kiss follows the recent tradition of horror movies dabbling in fastidious retro-styling and slavish homage as expression; it sits on the same shelf with Ti West’s House of the Devil, Pan Cosmatos’ Beyond the Black Rainbow, and more recently, Park Chan-Wook’s Stoker. The interesting distinction of the film is that it infuses its world with the cinematic obsessions that created it; Milo Ventimiglia’s Paolo is a screenwriter who meetsJosephine de La Baume’s slinky vamp Djuna at a kitschy video rental joint, both ending up in her spooky home watching the flickering images of   Luis Buñuel’s Viridiana. The carnal affair that plays out between them—she reluctant for fear of savaging him, and he hopelessly smitten—reminds of Paul Schrader’s Cat People in the way practical restraints to prevent mauling become kinky accoutrements in the bedroom.

Cassavetes doesn’t use these strands as mere call-backs but like fuel in the engine of her thriller, which spends most of its time questioning who we are really, if not agents of the legacies and patterns that formed us. An anxiety over natural inclination is what plagues La Blume’s nosferatu; she balks at Paolo’s lust-filled pursuance of her because she’s dedicated to casting off the primitive, violent habits of her kind. He, on the other hand, jumps into the lifestyle with little hesitation because she’s waiting on the other side. When Djuna’s temptress sister, Mimi (Roxane Mesquida) shows up, what was a smoldering duet becomes a grim merry-go-round that plays within the confines of a more conventional horror narrative. This isn’t a complaint; as Damned grows more visceral, it also becomes more engrossing, finally culminating in good, gruesome fun.

The disparity between Josephine’s respectable class and Mimi’s hedonistic abandon is apparent in every frame ofKiss of the Damned, and the film has great pleasures available thanks to both sensibilities. Art-house types will slobber over the exquisite cinematography by Tobias Datum, painting nightscapes full of libidinous vampires as dark-hued wonderlands brimming with crisp, moody splendor.  Gore-house denizens will applaud the way that order is restored to the occupation of vampirism, with dead bodies and frenzied attacks piling up as the picture goes on. Both camps will swoon to the haunting accompaniment of Steven Hufsteter’s propulsive score which marries the discordant bits into a satisfying whole. Although acting in horror movies rarely gets the credit it deserves, the cast here cannot be ignored. Ventimiglia conjures an almost frosty presence as the smitten Paulo, taking the same kind of character his Heroes co-star Adrian Pasdar played in Near Darkand giving it a distinctive and realistic spin. Mesquida and La Blume have electric chemistry as the two sisters who struggle for unity amidst their warring worldviews. It needs to be said, as well, that both make captivatingly hot vampires. If the movie is primarily one of sensations, it’s a definite winner on those fronts.

Why would a talent like Xan Cassavetes want to make a throwback vampire movie with sex and blood as the main course? Outside of the obvious geek refrain—why wouldn’t she?—the answer may lie in the fact that it’s an unexpected maneuver. The director comes from a fine and talented heritage, with father John and sister Zoe both exemplary filmmakers in their own right, and by chasing the genre she’s ensured that her work will be judged on a its own unmistakable merits. Cassavetes, no matter her motivations on undertaking Kiss of the Damned, becomes the splendid contradiction that Djuna romantically yearns to be; a figure of refinement and distinction, at play in the fields of the wild.

Kiss of the Damned is currently on VOD and opens in limited release on May 3rd.