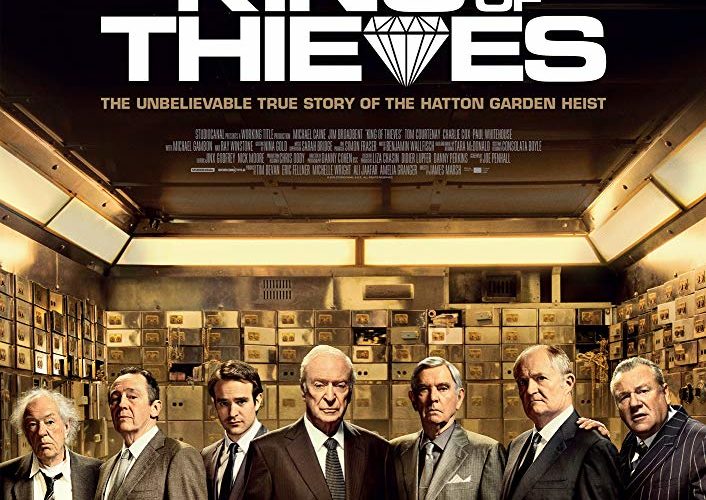 It’s not about the robbery. King of Thieves wouldn’t be worth telling if it was just watching these senior actors ranging from 60 to 85 fictitiously accomplish the “biggest jewel heist in British history” since there obviously won’t be any foot-chases or complex wire-suspended acrobatics. No, the reason this tale (adapted by Joe Penhall from a Vanity Fair article by Mark Seal) proves interesting is due to the characters they portray. How do diabetes, incontinence, and hearing loss affect their chances of success? What incentive do these seasoned criminals have to avoid using their wiles to take advantage of the others regardless of any notions of friendship they might possess? And exactly how menacing can their jovial smiles turn once a million quid is put on the line?

Good on director James Marsh and the producers for seeing what must have been a huge news reveal back in 2015 (the Great Hatton Garden heist was originally speculated as being undertaken by a professional team using brute force and unparalleled intelligence to pull off the “perfect crime”) as an opportunity to compile an A-list cast of the United Kingdom’s finest. They even go so far as splicing in footage from the actors’ past films of stoic cool with cigarettes in mouths to show off the glamorously suave maneuverings of youth now lost to time. Unlike Robert Redford’s swan song The Old Man & the Gun, however, these Hollywood greats aren’t retiring or looking to rest on nostalgic charm. They’re here to have a blast and get angry. And while the result isn’t as polished as David Lowery’s latest, you can’t deny the appeal of seeing Michael Caine (Brian), Jim Broadbent (Terry), Tom Courtenay (Kenny), Paul Whitehouse (Carl), and Ray Winstone (Danny) pretending to be bored, washed-up ex-cons with a chip on their shoulders as far as showing the world (and each other) they haven’t lost a step. It’s worth wading through the montages as segues so you can get to the good stuff of them getting at each other’s throats. While a fun bit of pettiness during the crime, this acrimony only gets better afterwards as it grows to potentially violent aggression with each jockeying for an upper hand. Despite initial appearances, these thieves can still conjure fear when needed.

Why hit a store of safety deposit boxes they know houses the retirement spoils of men worse than them, though? Easy: they don’t have their own. We meet Brian floating through life on the straight and narrow thanks to his ailing wife’s wishes for stability at the end. Terry is working part-time as a line-cook where he’s being bossed around by managers closer in age to his grandkids then himself. Danny can’t get a loan, Carl is languishing in his garden, and Kenny doesn’t understand the internet enough to offload boxes upon boxes of fireworks we can only guess to how they were procured. So when an acquaintance of Brian’s delivers a proposition, desire is rejuvenated. Basil (Charlie Cox) brings the door key. They supply the know-how. These old chums also bring the entertainment with sarcastic jabs and stories of yesteryear. Brian culls them together as the kingpin assigning jobs after going in to case the scene with Basil first. Some resentment arrives with them each doing things while he sits and “supervises,” but no one really has any room to complain once Kenny is caught sleeping while on lookout or Terry is forced to take a break when his blood sugar makes him “wobbly.” Add Basil’s eccentricities (he avoids eye contact to the point of wondering if Cox was still too tied to playing a blind Matt Murdock on Netflix) and an impromptu fence by the name of Billy the Fish (a hilariously disheveled and befuddled Michael Gambon) and everyone must be on his toes.

There are reasons for much of the weirdness that happens: either deflection or comedic augmentation. To my surprise, however, it was Broadbent who actually brought the contrasting edge to nicely subvert those otherwise loose and freewheeling antics that risk running amok. Caine can be gruff and Winstone formidable, but Broadbent somehow steels himself to prove that he’s the one not to be messed with under any circumstances. As the oft-genial gentlemen whose recent forays into villainy still hold a certain cartoonish flair above any malice (see Moulin Rouge!), it’s a welcome sight to watch him go dark — or at least as dark as a true-life crime escapade is willing to go. His paranoid rapport with Winstone is a highlight too, though, so he doesn’t go full psychopath. You need that edge as they put their own plans into motion as far as cutting the others out of the money. As they distract each other with that, Marsh and company make certain to reveal just how effective the authorities have become (surely more than Danny’s Forensics for Dummies book could ever reveal). The second half of King of Thieves doesn’t shift its focus onto the investigation, though. On the contrary, much of what we see on that side of things is done silently or in the background. As we’re watching Brian and company go about their business with way too much public candor for 21st century technology, the camera periodically pans to an undercover agent before the visuals cut to headquarters as the evidence is processed.

It’s a successful bit of real-time paralleling instead of the usual replay from a different angle trick. So rather than injecting suspense (they obviously don’t get away), Marsh is leaning into the juxtaposition of old guard and new that also exists between Basil and the rest. Ignorance to technology is a running theme throughout both to earn easy laughs due to the ageist nature of the joke and intrigue as far as which man — if any — is in control. That probably won’t be enough to get some audiences on board what is a pretty straightforward genre film, but it’s enough to provide its own spin. Between that and the sheer joy of seeing these actors comment on their careers through these characters, a good time should be had.