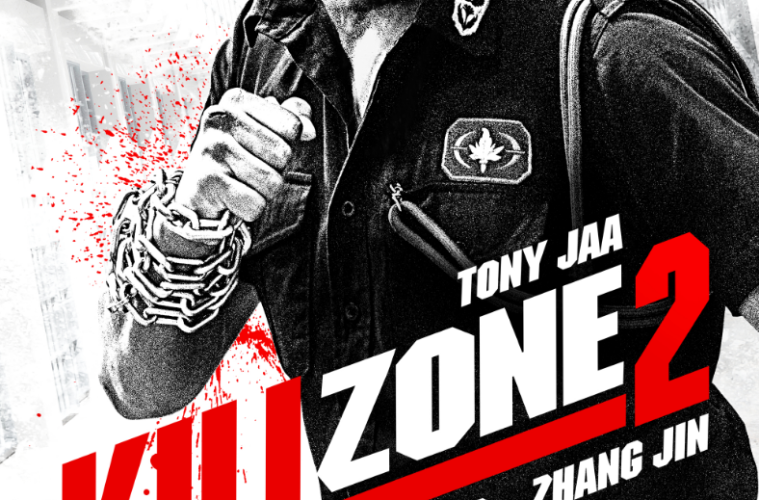 Containing a number in its title, yet blissfully not chained to franchise requirements — a decade-long gap between installments perhaps being the first clue as to a lack of continuity — Kill Zone 2 (aka SPL 2: A Time for Consequences) creates a welcome rupture within the action genre’s currently crumbling state: utterly classic in narrative beats yet unafraid to embrace the modern tools of the trade.

Beginning with familiar images (e.g. a cityscape and data streaming across a computer screen), there quickly comes the reveal of the narrative being (at least partly) built on a sick child, a trope of the melodrama, which instantly serves as a reminder of John Woo’s best films. The father of this child, police officer Chai (Tony Jaa), has taken on an additional prison-guard job to pay her medical bills. Unbeknownst to him, this new occupation plunges him not just into the world of working-class fatherhood, but an organ-harvesting crime syndicate — and, more importantly, in fateful contact with a particular prisoner.

Held captive in this jail cell (of course color-corrected to the digital-age favorite hue of puke-yellow) is Kit (Wu Jing), an undercover cop whose mission to take down crime lord Mr. Hung (Louis Koo) has left him in dire straits. Yet while he becomes a target of the prison’s liaison with Hung, Chai is forced to protect Kit when it becomes clear the man has the right bone marrow for his daughter. If steeped in plot mechanics (allegiances, double-crosses, and the such), the liquid-like qualities of the film — be it in its copious, digitally assisted long takes or two dreamlike motifs: a ringing cellphone floating in the sea or the beaming eyes of a growling CGI wolf — come to dominate the proceedings. Though bearing the names of multiple worthy authors — esteemed genre craftsman Soi Cheang, separately credited “action director” Chung Chi Li, as well as aforementioned martial arts superstars Tony Jaa and Wu Jing — it doesn’t come across as a series of separate parts, but rather a feat of synchronicity.

This is perhaps exemplified best in its prison-set fight scene, where the camera moves effortlessly with the obvious help of digital effects through cells and corridors as a riot ensues — yet without this glorious artifice extending to the fights themselves, which still maintain rigid movement and choreography. Or just pick the the surreal sight of the slick suit and tie-donned Louis Koo moving so effortlessly through the chaos of a riot.

While sequences like these could be deemed nearly as ostentatious as the similarly “virtuoso” opening battle scene of Alejandro G. Iñárritu’s utterly dreadful The Revenant, spontaneity isn’t lost in the elaborate digital and athletic choreography, such as a duffel bag swiftly flung to an opponent’s head. Yet moreso, by the time of its climax “bodies in space” achieves a new kind of meaning: not simply another instance of the camera traveling through an octopus-arm-like environment of an airport or prison, but, with its stars flying through the air of a penthouse like modern Wuxia knights (perhaps it’s not too far from the superhero films it practically shames), a total buoyancy. Stylistically free but still cleanly delineated in character and crime-film structure, there comes a clear direction for the 21st-century action film.