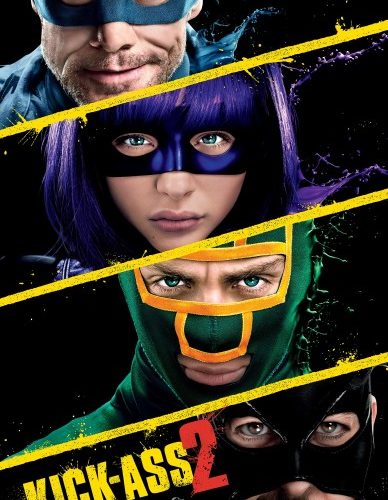 When it comes to the original Kick-Ass movie, many considered it either a great subversive piss-take on comic book heroics or a banal case of the emperor’s new clothes. When I was first confronted with Matthew Vaughn’s understandably diluted take on Mark Millar’s blood-soaked comics, I found my reaction somewhere in the middle ground.

Vaughn captured some fantastic sequences, such as Dave Lizewski’s (Aaron Taylor-Johnson) first major skirmish outside a convenience store and the arrival of diminutive, fetish-geared Hit Girl (Chloë Grace Moretz), an adolescent who shish-kabobed self-proclaimed c**ts to the candy-coated strains of the Banana Splits. The film itself skirted around satire and drama, playing with the undercurrents of super-hero wish fulfillment and sent-up the so-called heroics of wannabe vigilantes. No, matter the protestations of its acolytes, take away some of the tasty icing, and Kick-Ass was almost business as usual at the origin story factory. Inexplicably, my ass wasn’t kicked, so much as lightly swatted.

Now, Kick-Ass 2 arrives on the scene, and how you take it may depend largely on how much you adore the original movie. Although director Jeff Wadlow is never as resourceful or artistically nuanced in his staging of the story, I found myself connecting with the characters, finally understanding Lizewski’s yearning to do the right thing, real-life be damned, and sympathizing with Hit Girl, who tries to keep a promise to her deceased dad and spends most of the movie contending with high-school bitch elite. The action sequences zip along, there’s some added pep from the introduction of Justice Forever, a masked team that bridges the gap between Watchmen and Mystery Men, and Christopher Mintz-Plasse steals the show as Chris D’Amico, once Dave’s old pal “Red Mist,” now the world’s first super-villain. The movie may be more traditionally coiffed in the comic-book mode, but it’s also more accessible and occasionally more engaging, especially when it comes to catching the yearning of finding your place and being more than you are.

At the same time, though, there’s just something missing, and although the first film had its flaws, it always felt more assured and accomplished than what we get here, even when the script has culled better material from the hot mess of Millar’s comic sequel. Wadlow’s film provides an entertaining jaunt through the Kick-Ass universe, and finds ample reason to follow Dave, Mindy and Chris through their growing-up, but is simply too enthrall to the alleged legacy of its predecessor to break through and be it’s own agent.

Being your own agent, though, is the very crux of Kick-Ass 2, and it’s a comedown for the series’ satirical force when all three central characters contract major daddy issues that are never played for anything less than cheap, intended pathos. With the exception of Nicholas Cage’s nutty, devil-may-care grin staring from a quaint portrait in the training room, there’s not much energy or interest mined from the current trend of superheroes to whine and cry for lack of hugs and snuggles from papa. The emotional trajectory is mostly treated with a straight-forward hand, sending Dave off to get training from Mindy until she “retires” at the behest of foster father Morris Chestnut, while Chris accidentally kills his mum, and then decks himself out in her dominatrix gear, rechristened as The Motherf***er. The stage is set for a three-pronged narrative that watches these young people grow up in the spiral of over-heated fan boy dreams of violence and derring-do. Looking to get back into the game, Dave hooks up with make-shift hero team Justice Forever, led by ex-Mafioso turned born again Christian, Colonel Stars and Stripes (Jim Carrey) and including the likes of Night Bitch (Lindy Booth), Insect Man, Dr. Gravity (Donald Faison), and a husband and wife duo called “Remembering Tommy,” who formed after their son was abducted. The passages that involve the team coming together to build their secret lair, serve at soup kitchens and triumphantly storm the den of a slave trader are some of the film’s best sequences and they deftly form a picture of what Dave has always wanted from the Kick -Ass mantle; a place to belong, a reason for being, a difference to make.

Although Carrey has obviously been vocal about his disdain of the film’s violence in the wake of recent tragedies, his strong but understated work in the picture speaks more loudly and positively than his recent hand wringing. The Colonel is a man who has first-hand contributed to the mean ugliness of the world, but now wishes it were a different place and will do what’s necessary to protect the innocent and helpless. It’s a small but sturdy turn, and while it’s not the magnetic nuttiness of Cage’s Big Daddy, it works, particularly when contrasted against Chris’ new villain team, “The Toxic Mega-C**ts”.

Evoking the flip side of a graphic-novel inspired worldview, the TMCs are every bitter nerd cliché amped up to full throttle and then spewed out on an unassuming society. Chris and his reign of terror make up some of the funniest (and most tasteless) portions of Kick-Ass 2, and if you find some of the bits supremely wrong-headed, just know that they have been significantly toned down from the vile ugliness of the comic. The standout of the gang is body-builder Olga Kurkulina as Mother Russia, a hulking mercenary that looks like Ivan Drago with mammary glands. While the others are all wannabe baddies, Kurkulina’s berserker feels like a real comic creation that tore itself into our reality, and her ferocious standoff with police cruisers is more effectively reminiscent of Superman 2’s evil Kryptonians than anything we saw in Man of Steel. All of the pieces are here for a fitting sequel, and Kick-Ass 2 is a giddy kind of ride, offering up well-designed action scenes and a few perfectly aimed visual gags but it never does much with its own satirical stylings, more content to wallow in the outrageous than move towards any kind of meaning, subversive or otherwise. Wadlow throws the gore and the naughty language out to assure us this is hard-edged and not business as usual, but every one of his big beats are the same as anything found in the Marvel universe.

Kick-Ass 2 trots out almost every trajectory for a superhero sequel; have the hero join a team, rob the hero of their alter ego, take something precious from the hero, etc. Johnson and Moretz have grown into the roles, and in the latter’s case, her smirking smile. Still, sending Mindy off to re-enact the Last Temptation of Buffy Summers is not a satisfying use of the character, and the more Dave starts to resemble a real, capable superhero the less interesting he becomes. Mintz-Plasse, adding a few degrees of subtle angst to Chris, is probably the star here and Kick-Ass 2 becomes the Motherf**er’s movie to raise or ruin. Despite all the talk of the film’s irresponsible views of violence, the entire movie is a paean to how such brutality shapes and transforms lives and generations. In the end, it’s not that Kick-Ass 2 is irresponsible, it’s that it’s largely disposable in how it deals with those heavier themes. If it does anything particularly well, it’s highlighting the virtues of the last film that managed to actually strike a few rebel chords in the genre.