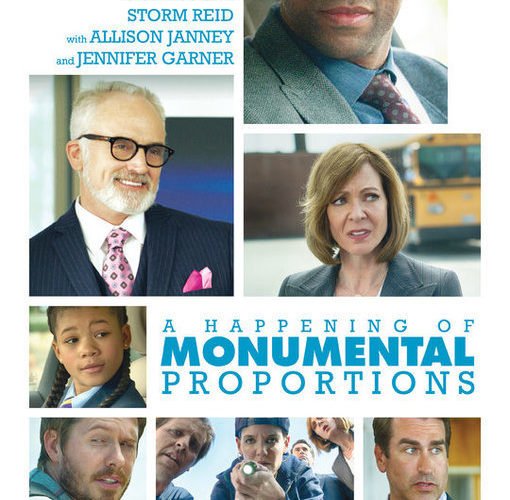 Review: Judy Greer’s Directorial Debut ‘A Happening of Monumental Proportions’ Could Use a Satiric Touch

Men have it tough, don’t they? I mean they have to worry about married women they’ve engaged in inner-office affairs with ratting them out to the new boss. Some are forced to face the crushing existential crisis that comes with their failed pipe dreams of rock stardom revealing how they’re nothing but lowly private school music teachers who’ve accomplished nothing in their lives — including, apparently, educating the children in their class. And don’t get me started on the ones who must endure the untimely death of their wives and the inconvenience of then having to juggle alpha male status at work with fatherhood. Blech. Why can’t the world just let us be pricks spouting homophobic rhetoric to compensate for penis size like we were born to do? Screenwriter Gary Lundy asks this question with the final, surprising cameo-led scene of A Happening of Monumental Proportions. I need to therefore believe Judy Greer selected it as her directorial debut because she thought she could somehow infuse a little satire and approach highlighting examples of masculine vulnerability — a goal that was sadly not achieved. Instead we merely receive a bunch of male characters whining about how hard their very nice existences are. We get a widower (Common’s Daniel) dealing with a spurned mistress (Jennifer Garner’s Nadine) who isn’t averse to sabotaging his career. A lonely boy (Marcus Eckert’s Darius) who feels entitled to the women surrounding him because he’s a “nice guy.” And a bachelor (Anders Holm’s Christian) believing his middle-class life isn’t enough.

These are the three men at this film’s core. They’re whom we’re to feel sorry for and whose drama propels us forward before they converge at a school mired in unexpected tragedy (the death of a gardener that Allison Janney and Rob Riggle’s “authority” figures have no clue how to handle). Daniel is scheduled to speak at his daughter’s (Storm Reid’s Patricia) Career Day, Darius has just begun classes as the “new kid,” and Christian is one of the establishment’s illustrative teachers. So the first goes through a ringer of a day after his new boss (Bradley Whitford’s Mr. Schneedy) accuses him of petty office vandalism, the second must face the depression that his unrealistic expectations of women provides, and the third must confront his unresolved insecurities. How will they overcome? By steeling themselves to the fact they are men and men can survive. Men can stand up for themselves and accept their blame in a steadily worsening series of events. Men can tell their fathers what ails them and learn it’s okay to just be friends with women (even if their initial interaction with them proves the opposite and therefore sends up red flags no one should ever underestimate). And men can accept that they’re enough and that boring jobs can get them where they want to be once fantasies of being cool dry up. Maybe I’m wrong, but those revelations seem immensely tone deaf for where we are right now as a society and especially for a Hollywood that usurped the #MeToo movement.

Do Greer and Lundy legitimately think we’ll care about these characters? They’re each a self-centered blamer who wields depression as an excuse only to throw it out the window as though letting go is that easy. We can’t therefore see this trio as vulnerable because we’re too busy seeing through their artificial façades. It’s easy to guess that Daniel’s affected Charlie Brown demeanor is being set-up for some rejuvenation of strength. The same goes for Darius’ dejection and Christian’s malaise. None of it feels authentic because those surfaces are all we know, each a manufactured punch line within a dramedy that will never truly earn empathy. We simply wait for these men to get over themselves rather than grow: an unfortunate ablest and patriarchal message no one needs. That’s not to say it isn’t well directed or funny in many instances, only that the material itself is dated, misguided, and mostly presented without any bearing on the over-arching narrative. The whole death of the gardener is a long play towards a contrived payoff and yet we’re constantly peeking in to see a harried Janney, ignorant Riggle, and cool-headed Marla Sokoloff trying poorly to poke fun at the economic disparity between white educators and Latino laborers. These sequences only come off as mean instead — mean and random thanks to Katie Holmes and Nat Faxon’s unmoved paramedics. The stuff at Daniel’s office is also superfluous filler (Lola Glaudini) and elaborate machinations pitting him against Schneedy and Nadine’s husband (the cameo) with middling results. They provide nothing of worth.

The only character in the whole thing that we can actually root for is Storm Reid’s Patricia. She’s the responsible adult amongst grown children, stewarding her father forward and gently giving Darius a much-needed wake-up call from his entitlement. She’s both Miss Popular and the compassionate welcome committee who understands the struggles we all go through while the rest walk obliviously with their heads down. When Daniel tells her he’s glad she takes after her mother rather than him, I couldn’t help but nod in agreement because all these insecure men who’d rather roll around on the floor than admit they’re wrong have literally nothing to offer the next generation. And sadly neither does this film despite so much talent making us hope it might.

A Happening of Monumental Proportions opens in limited release on Friday, September 21.