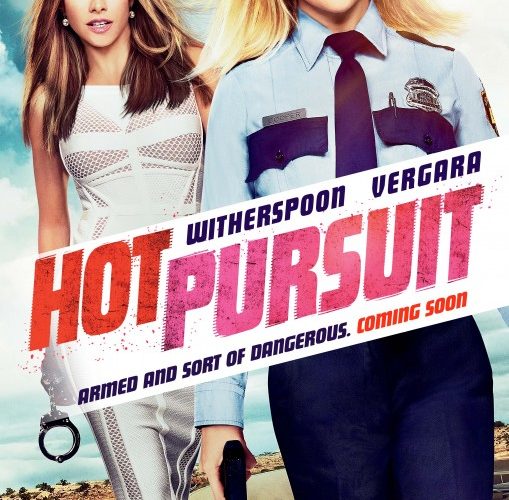 Reese Witherspoon and Sofia Vergara spend the entirety of Anne Fletcher’s Hot Pursuit fleeing both the police and drug-cartel mobsters, but it’s really well-earned laughs they manage to elude. Perhaps the most frustrating of the recent female buddy flops trying to re-ignite the Bridesmaids spark, Pursuit transforms from merely inert to actively agitating before its first act is even over. It may attempt to create the girl-power version of Midnight Run, but the only real joke in this so-called comedy is that any of the women who worked on it chose to make it at all.

There’s nothing wrong with playing a particular formula if you’ve got something interesting you’re willing to attach it to, and if Hot Pursuit were able to drudge up engaging characters, there’s no reason it couldn’t have achieved a measure of success. Instead, this dim bulb of a film seems to only have monetary accolades on the mind, doing about all it can to check off various audience-friendly boxes and getting so confused in the process that it never really figures out who it’s really for. How else to explain scenes where Vergara and Witherspoon make-out in front of an angry hayseed, or a hotel room catfight set to ‘Black Betty’?

Describing the plot is a fool’s mission, really, as it’s just a set-up to try and mine laughs from the obvious physical dichotomy between diminutive, perky, white-bread Witherspoon and statuesque Latina spitfire Vergara. The film’s first scene does make an honest attempt at establishing Witherspoon’s Officer Cooper by introducing us to the way she was essentially raised in her dad’s squad car, but when she is assigned to guard Vergara’s Daniella Riva—the wife of a drug-lord—most attempts at genuine character development are dropped by the wayside. Vergara, who climbed to fame by adding some nuance and satirical verve to vaudeville-level Latin stereotyping on Modern Family, is completely stranded here in the type of role her Gloria comically riffs on during that sitcom.

To see the film is to question whether Witherspoon or Vergara have any real comic chops, and it would be very easy to use this film and a few other recent titles in their ouvre (Reese has This Means War and Four Christmases, Vergara has everything that’s not Chef) to make that case. Ultimately though, that’s not the case; Witherspoon came into her own with the plucky and acerbic characters of Election, Pleasantville and Freeway, and she even trumped the milquetoast screenplays of Legally Blonde and Sweet Home Alabama with a likably cheerful comic timing. Vergara is playing with, and trying to overcome, a very broad but intensely specific perception of herself, but when she manages to lasso in those preconceptions and expectations and funnel them into something disarming, she can be downright vibrant. The real pity of Hot Pursuit isn’t merely that it wastes time, resources and admission price, but that it really doesn’t work harder to use its two central precious resources for what they are clearly worth.

Much like last spring’s The Other Woman, Pursuit spends far too much time trying to prove that its rearranged male fantasia is actually about female reclamation of a subgenre. Both films have in common the fact that they must magically convince us that women who seem capable off-screen could transform into the shrill, one-dimensional ciphers served up to us. This may explain why Witherspoon—inexplicably she and Vergara are also listed as producers on this mess—sticks out so blatantly in the later chapters; she’s actively battling the meager schtick she’s asked to hash out. You can tell too, when Vergara starts drowning in the character; her accent and mannerisms cease to have any inflection or timing and become like white noise that blankets the film.

Even though Fletcher and the two male screenwriters (David Feeney and John Quaintance) intend to unpack Cooper and Riva to us as capable and individually resilient women, this never really happens because the convolution greatly outweighs the content, and late revelations by Vergara or a sidelined romance involving Witherspoon can’t properly deflect the earlier scene where both women masquerade in a deer carcass. It isn’t hard to see though, that this movie didn’t stand any chance once it settled on this particular script. A clear and troublesome indicator is that it isn’t only the two leads who want for better characters, but the entire landscape of the film, peopled with supporting faces that don’t register at all. The marketing would have you believe this is a clear, cut-and-dry comedy, but when you get to theater you realize the foreground, middle and background are all out of focus.