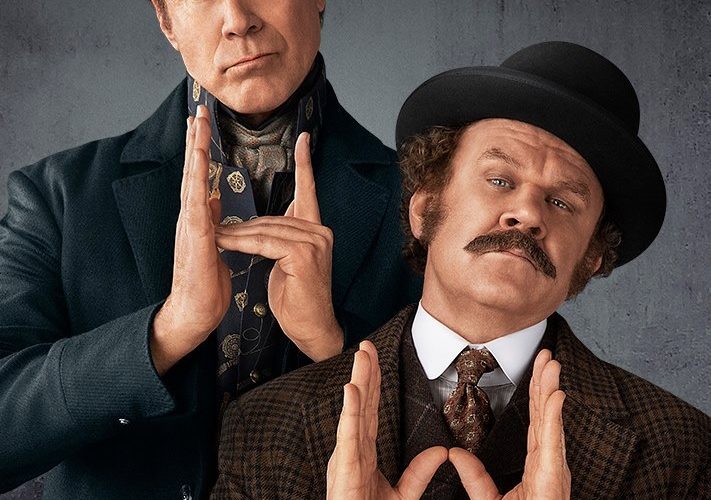 Playing out like a Saturday Night Live or Funny or Die sketch that does go on for a beat–or several hundred–too long, writer-director Etan Cohen’s adaption of Sir Arthur Conan Doyle’s Sherlock Holmes adventures inspires only a few more chuckles than Guy Richie’s version. A mess of a picture, it finds humor in olde tyme wordplay like “queer” and “trumped up” before running out of gas. Many gags go on for an insufferable period of time as its two leads, the usually hilarious Will Ferrell and John C. Reilly as Holmes and Watson, are the inmates running the institution. I can’t imagine Cohen (director of Get Hard, not to be confused with Ethan Cohen) ever tried to pump the breaks. This is nearly as bad as the “unrated” home video extended cuts that insufferably throw everything including the kitchen sink killing any sense of comic timing.

What’s left is a film with an astonishingly impressive cast including Ralph Fiennes, Rebecca Hall, Kelly McDonald, Hugh Laurie, Steve Coogan, and Rob Brydon playing along in hopes the results might yield comic gold. It doesn’t, and Holmes & Watson fails precisely because its filmmaker has no desire to take control of the material. Despite a few moments of humor and charm that shine through, informed by the goodwill of other Ferrell and Reilly bromances (including a music number that kicks off the film’s third act), this is a comedy that falls back on lame and familiar gags.

The plot is a fairly thin device for gags: Fiennes co-stars as Holmes nemesis Dr. James Moriarty, who escapes prosecution and moves on to threaten the Queen. This leads to the entrance of an American “lady doctor” Grace Heart (Hall) who becomes a love interest for Watson. Her assistant Millie (Lapkus) is largely mute, making exaggerated eye contact with the emotionally distant (by training) Holmes. The whole plot revolves around the Titanic in the film’s third act which is rather fitting for a comedic tragedy of this magnitude.

The gags involve cocaine, bees, primitive MMA, raw unions, and a selfie that goes horribly wrong with the queen, all of which are terribly tired and unfunny. This is the kind of damaged goods studios have been quietly selling to streaming services. (Reports indicate Netflix even rejected Sony’s offer to sell it off to them.) Holmes & Watson recalls a different era: the 90s, when films like The Waterboy and Ace Ventura: Pet Detective dominated the comedy landscape with silly physical humor prior to the Judd Apatow school of comedy raising the bar. There is an audience for this movie, although the 12-year-olds sitting a few rows in front of me seemed to care more about browsing Snapchat rather than what was on the big screen in front of them. I can’t exactly blame them.