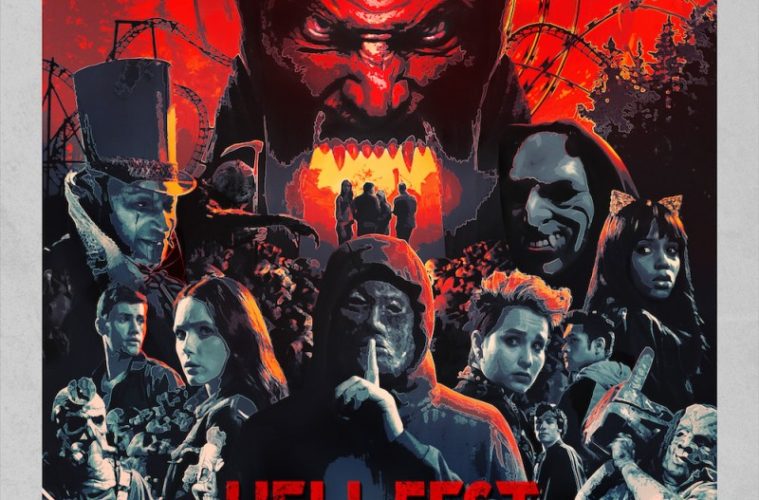 I can think of no better way to kick off the Halloween season than with a celebration of frights and friendships — oh, and bloody murders. Razor sharp, with a cast of characters so likable you’ll hope they all survive, Hell Fest is a giddy and almost euphoric horror experience.

In  Gregory Plotkin’s new horror feature, a group of college buddies are headed to the titular haunted park to have some fun and get terrified. They get both, but not in the doses they’d ideally measure out due to rumors of a masked killer sneaking into haunted attractions. Once inside, he creates a terror that is all too real, protected by the spirit of the season and a collection of realistic props. The film’s premise is a clever one, drawing parallels between viewers and the group, all strapped in for the art of the scare. But we know something they don’t, and the idea of bloodlust and spectatorship sneaks into the narrative, without beating a dead corpse.

Set in a haunted park, Hell Fest has twice the jump-scares of your average slasher, yet director Gregory Plotkin does something smart. Within the world of the characters, the sound is realistic, coated with killer cackles, and loud spring-loaded contraptions. The characters scream, and they laugh. He contrasts this with moments of real fear for the group, where the sound becomes more expressionistic; background noises fade — or are accentuated to represent sensory overload — and aural tinglings of terror overtake the atmosphere. The score shrieks or whimpers to silence, and we are enveloped in terror.

The sound design represents Hell Fest as a whole: a balance of fun and fear. A return to old-school horror, Hell Fest surely strips down the slasher to its core components yet it also updates it in both surface level and elemental ways. At its most basic functions, these updates come from the characters: their perspectives, their interplay. Plotkin also brings in modern technology for scares, namely for a cellphone sequence wherein the tension begins to unfold into terror. Beyond this, Plotkin approaches the genre with an understanding of its foundations, and crafts subversions and new perspectives on some of the staples to create a Halloween banger.

The masked murderer audiences have known for decades is given a fresh fierceness in Hell Fest. An early indication of Plotkin’s grasp on the atmosphere is with the killer’s entrance into the park. Plotkin actually bothers to load this moment with genuine menace and precision, introducing a specific music cue and loading a visual signifier that will serve as a device for tension. As he steps amidst the crowd, there is the sensation of terror walking among us; the weight of his presence is sustained throughout, and he walks a line between ungovernable evil and human error. Within this juxtaposition, Hell Fest creates a slasher for our time.

The anchor to all of this is undoubtedly the performances. Unlike in many slashers, the friend dynamic in Hell Fest is a joy, and their chemistry is electric and hilarious. Budding romances and vows of life-long friendship all work, and I found myself hoping for 90 minutes watching a group of friends enjoy a night together. Amy Forsyth stands out, giving a focused performance that demands you believe she is real, and root for her at every turn. Throughout, there is a naturalism and truth which brings the group to life.

This means that when they near the end of their lives, it devastates. As the first kill approaches, dread overtakes an excitement for the display of practical effects (though what a display it is), a rarity in this subgenre. The group’s organic humor is contrasted with a crimson red one, as if your friends are actually getting murdered. This makes for one a more complex slasher, and creates a dichotomy in Hell Fest that is essential for an impactful horror film. A balance is struck between fun and fear, make-believe terror and actual trauma. It borders on an examination of real pain, still lets you whoop at the madness, then has that cheer catch in your throat.

A scene of tension assembled around a photo-booth is a summation of Hell Fest’s impact: what starts as a cute development of romance between two characters shifts to an unnerving panic, with the act of their passion now the hindrance to their safety. As they kiss, the killer approaches. They are unknowing, and yet we know, so we are caught between egging on the bloodshed and worried for our friends. The score builds as the crosscutting intensifies, but at this stage, we are only teased their fates, and left with a relieved sigh. Fun tips toward fear without losing tempo, and the lexis of Hell Fest — the memorable score, crosscutting, and misdirection — mirrors the film’s narrative trajectory of ramping intensity and genre play. Complicating our relationship to slashers while still delivering the goods, one thing is certain: Hell Fest is the park to be in after dark.