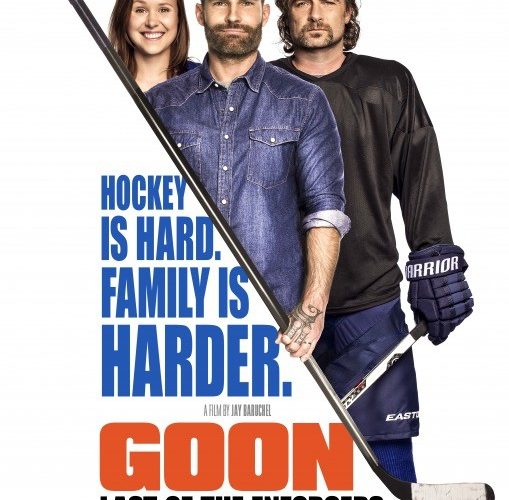 Review: ‘Goon: Last of the Enforcers’ is a Padded, Heartfelt Sequel

The best part of hockey comedy Goon is its ability to never forget itself. Jay Baruchel and Evan Goldberg didn’t write it (based on Adam Frattasio and Douglas Smith’s non-fiction book) like your usual sports film where winning or losing was the goal. They instead brought to life a soft-spoken, compassionate guy whose only talent isn’t laying guys out on the ice like his bloodthirsty fans believe. No, Doug Glatt’s (Seann William Scott) calling is as protector for his family, friends, and teammates. He joined the Halifax Highlanders to provide a spark as well as a formidable presence that would lend his more talented linemates peace of mind and confidence. Victory was never about securing a championship, it was reminding his team what hockey meant beyond the scoreboard.

So when things cut to black on a game for which success occurred before the puck dropped — and after a much hyped pugilist battle between Glatt and old-timer Ross Rhea (Liev Schreiber) — it was perfect. Do the Highlanders make the playoffs? Do they win? Does the smooth-skating former first rounder Xavier LaFlamme (Marc-André Grondin) make it back to the big leagues? There are no answers to these questions because none of them actually matter. Doug found his place, those he touched were reborn, and audiences got a taste of the throwback hockey today’s game left behind. Baruchel could have stopped there by honoring Smith’s legacy and providing a feel-good against-the-odds cult classic in waiting. But why do that when there are plenty more life lessons to be learned? Welcome to Goon: Last of the Enforcers where Baruchel (stepping into the director’s chair for Michael Dowse) and co-writer Jesse Chabot throw in the kitchen sink of sports clichés and their resulting personal drama. It’s five years later and a lot has happened to change the Highlanders dynamic both as a for-profit entity under new owner Hyrum Cain (Callum Keith Rennie) and something that means more than his bottom-line to the players. Rhea is retired and battling in barely legal fight clubs for peanuts. LaFlamme is growing older and feeling the strain wrought by his on-ice dipsy-doodling. And Glatt finds himself married (to Alison Pill’s Eva), team captain, and mere minutes away from hearing the fat lady once young upstart Anders Cain (Wyatt Russell) approaches with fists raised.

Suddenly the wheels fall off for everyone involved. Glatt must move from protector on the ice to one at home with a baby on the way. LaFlamme must evolve from possessing raw talent to using it to the best of his current abilities if he ever hopes to hit the NHL post-lockout. And a selfish shake-up wherein Hyrum signs his son Anders (the guy who ended Glatt’s career) as new Highlanders captain to the chagrin of all — perhaps even Anders himself — threatens team chemistry. Coach Hortense (Kim Coates) loses the room, lockout available newcomers destroy camaraderie, and Cain finds himself in the midst of an identity crisis now that his father’s meddling in his life and career has become a constant norm. It’s time for wholesale self-actualization.

There’s admittedly a lot going on — enough that it’s impossible not to become overwhelmed by the sheer amount of information you might not see bear fruit until much later. Baruchel isn’t able to focus on one character while the others find three-dimensionality around him. He’s literally written himself a four-headed monster wherein Doug isn’t more important than Rhea, LaFlamme, or Anders. He therefore has to constantly shift between the monotony of Glatt’s new life as an insurance associate (along with the struggles Eva faces via domesticity), the feelings of uselessness felt by a lost Rhea devoid of a post-hockey safety net, LaFlamme’s internal fight to finally become the leader his draft status predicted, and Cain’s war on and off the ice against personal demons born from his father.

Don’t get me wrong: Baruchel and Chabot do tie everything together in one cathartic battle royale a la Goon (where two teams brimming with animosity towards the other meet, a playoff berth on the line). But it can be a tough ride there thanks to the multiple converging threads also housing bit-players with often lewdly offensive punch lines taking more time away from the overall message. Baruchel’s own Pat (Doug’s BFF) loses screen-time despite increasing his obnoxiousness (intentionally so). Elisha Cuthbert enters as Eva’s sister Mary, a walking-talking-drinking Canadian hockey groupie stereotype of epic proportions. Jason Jones brings a lot of homophobia as Glatt’s boss. And T.J. Miller wedges himself in as an uncensored sportscaster and amateur slogan-maker during the ever-present “TSN” interludes helping us regain our bearings.

Despite these distractions — or colorful hilarity depending on your comic sensibilities — Goon: Last of the Enforcers does ultimately deliver on the promise its predecessor made with a gooey, heartfelt center surrounded by a profanity-laced candy shell. It’s great to see everyone back in contextually relevant roles (Richard Clarkin’s Ogilvey and Larry Woo’s Park Kim aren’t playing, but still present) and an escalation in violence as blood literally soaks the ice during games and exhibition fights alike with as much comedy as such displays can possess. I found it at its best when dealing with the existential crisis of growing older and what it means to simultaneously juggle careers, marriages, and friendships. Rather than calling a closed chapter an ending, you have the power to create a new beginning.

I also liked the internalized war being fought between Russell’s Anders and Rennie’s Hyrum because it gives weight and substance to the relationship friction shared by Doug and his father in the first film. There’s this idea that parents can push their children onto a path they want for their own happiness rather than his or hers. Doug’s ability to escape that dangerous expectation was effective in its brevity, but Anders’ continuous struggle to break free (if he ever can) adds a more complex psychology to it. Expectations are a huge part of the plot mostly due to individuals not living up to the image they desire for themselves. Anders’ path shows how success creates prisons just as easily as failure. True happiness only comes from within.

Goon: Last of the Enforcers hits limited release and VOD on September 1st.