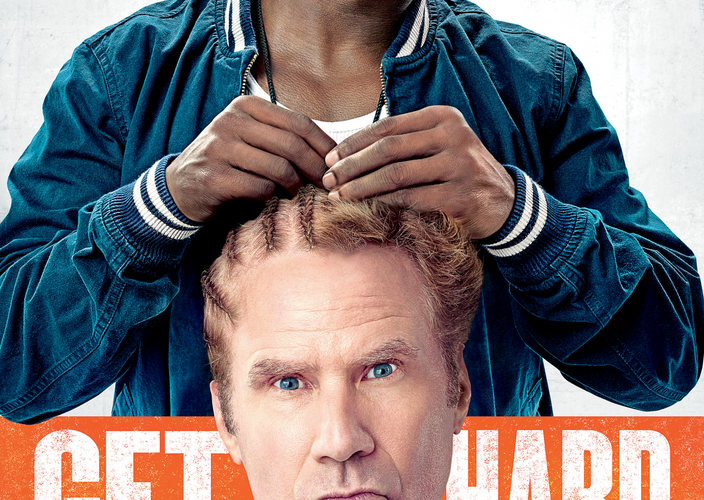 The premise behind Etan Cohen‘s directorial debut, Get Hard, should work. A super-rich finance wiz named James King (Will Ferrell) is convicted for numerous counts of fraud and sentenced to 10 years in maximum security prison. San Quentin, to be specific. So he enlists the help of Darnell (Kevin Hart), the only black person he knows, to help him prepare for what will surely be a very tough decade behind bars, assuming the man has served time. Of course, Darnell is a hard-working family man who has never been to prison. But for the right price, he pretends to be just that.

It serves as a mix of liberal wish fulfillment (punishing the 1%) and the potentially-intelligent acknowledgment/subversion of racial stereotypes in America. But then comes the motivation that ultimately drives the entirety of the film’s plot: James King does not want to suck a dick. More than a few times in the film Ferrell’s character makes this clear: going to prison is bad, “being someone’s bitch” is far, far worse. The screenplay, credited to Cohen, Jay Martel, and Ian Roberts (with a story credit to Adam McKay), relies on gay and black stereotypes to push the envelope but rarely does much to challenge those perceptions. It’s one thing to display our country’s ignorant fears, it’s quite another to perpetuate them. Too often Get Hard toes this line and falls on the side of the latter. During a scene in which Darnell takes James to the gayest brunch in Los Angeles so he can learn to suck dick, Darnell tells his student to “dive in, that’s what they do.” What follows is a brutally-unfunny, extended sequence where James attempts to suck respected comedian Matt Walsh‘s dick, constantly gagging at the thought of doing such a thing. Now, let’s be clear. Will Ferrell and Kevin Hart are two of the funniest comedians working today. Watching them play off each other at certain points here is delightful. Take a scene where James asks Hart’s Darnell how exactly he wound up in prison, thanks to the prodding of Darnell’s disapproving wife (Edwina Findley Dickerson). Darnell proceeds to recite the plot of the seminal early-90s film Boyz in the Hood while James sits enraptured by the tale, which he assumes to be the truth. This is a smart and funny moment that pokes fun at perceived urban culture. Unfortunately, these moments are few and far between.

Too often the filmmakers rely on lowest-common-denominator prison rape jokes and lazy plotting to allow for action-comedy set pieces, resulting in a poorly-constructed scene at a White Supremacist stronghold and a sloppy third act that feels like an afterthought. Alison Brie is basically ignored in the role of James’ wife, a money-obsessed bimbo forced to trot around in lingerie for no real reason. Once again, it seems like Cohen and company mean this to be some sort of commentary on the current state of affairs. Sadly, Get Hard is never funny enough or smart enough for long enough to get the point across.