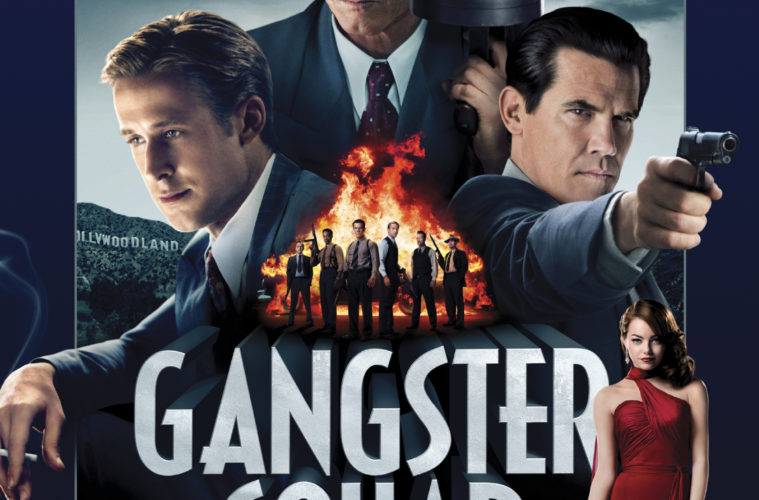 Tragedies like last year’s shooting in Aurora, Colorado are just that: tragic. We can never imagine the pain, anger and heartache of families and friends affected or ever want to think it could happen to us. So when art skews close to reenacting that suffering — albeit with no relation whatsoever to the actual event — one can understand the trepidation in not wanting to exacerbate things by belittling the horror or appearing callous and uncaring. This is why I’m not surprised Warner Brothers held their new film Gangster Squad back due to a scene we all saw in the trailers, depicting men with automatic weapons shooting an audience at Grauman’s Chinese Theatre. It was the right thing to do. Excising the scene altogether, however? That’s a travesty of artistic integrity. Was the scene integral to the plot? Yes. Did it need to occur at Grauman’s? Obviously not since they reshot the climactic outburst of violence in Chinatown instead. But this isn’t the issue. With talk swirling once again about entertainment breeding violence in the wake of December’s Newtown, Connecticut nightmare — a redux of Joseph Lieberman’s Mortal Kombat vilification from the 90s — the willful removal of a coincidence can only help the lynch mob’s case. Whether the studio was afraid of backlash, were thinking about the bottom-line and how many people would boycott, or genuinely thought the parallels would be tasteless despite being filmed way before Aurora occurred, something about self-censorship galls me to no end. Call me insensitive; call me soulless. I don’t care.

Film is an artform, this is fact. Schlocky genre work may be bad examples of its capacity for pure artistic value, but that doesn’t make Plan 9 From Outer Space any less a creative endeavor full of blood, sweat and tears than The Godfather. Whether you enjoy Gangster Squad or not, you cannot deny the meticulous art direction recreating Los Angeles of 1949 or the work done by every actor and crew member. No matter the budget or talent, it is probably rare to find someone in the industry admittedly phoning in his performance because one film is a paycheck and another is fit for the museum. Where do we draw the line on compromising our vision because of the misdeeds of psychopaths? When does artistic integrity become completely neutered in lieu of delivering inoffensive entertainment?

Art is supposed to engage, offend, and emotionally resonate. We’re supposed to be affected by what is onscreen, altering for however briefly the way we view the world and our memories of joy and pain within it. These artists have a duty to deliver work provoking conversation, action, and derision. We should be talking about the courage to let a film stand on its own merits out from the shadow of an unconnected tragedy, not its compassion for catering to a public constantly on the prowl to blame anyone further than arm’s reach because its easier than looking closer to home. I hate that a monster senselessly cut short the lives of so many in Aurora and I hate the media’s love to shove his name down our throats like some backwards martyr. I also hate how I haven’t started talking about Gangster Squad itself until this far into my review because it’s actually a pretty good film that overcame my unwarranted preconceptions. I loved Ruben Fleischer‘s Zombieland for its unique visual style and fun atmosphere, but those were exactly the things I worried about after watching his new movie’s trailer. It looked like this film noir-ish, Untouchables-esque tale was going to be cartoony and over-the-top when it could successfully tell its inspired by true events yarn straightforwardly. Scripted by Will Beall from Paul Lieberman‘s book Tales from the Gangster Squad, the story is intriguing in -and-of itself with its rogue band of authority-shirking cops going after their city’s most notorious gangster off the books. It doesn’t need too much embellishment.

Thankfully, Fleischer saw this and kept it rooted in reality besides its Technicolor sheen of deeply saturated colors. Not quite Dick Tracy–although that would be an apt comparison especially with Sean Penn‘s Mickey Cohen bearing a striking resemblance to that film’s Flattop—it still gives a pulpy, heightened sense of purpose to what occurs onscreen. Josh Brolin‘s idealistic war hero Sgt. John O’Mara is the only one Police Chief Parker (Nick Nolte) can trust to clean up the streets and the atmosphere cultivated paints him in this “white hat” trope perfectly. Recruiting other like-minded souls to assist him, this band of misfits, minorities and a ready-to-retire vet see Cohen’s reign of terror as an enemy invasion and they’re ready to engage in guerilla warfare to drive him out.

Riddled with clichés — from a family man making the ultimate sacrifice, a leader’s pregnant wife getting caught on the frontlines and a young happy-go-lucky kid’s death providing the push to send a key member of the squad out of ambivalence — the script does leave a lot to be desired if you’re looking for more than over-wrought, steely-eyed melodrama. From the posters to the trailer, however, I don’t think anyone could think it would have been otherwise. Gangster Squad is a brutality violent film inside a neo-noir world with good guys and bad guys and little in between. It’s a success in these terms at providing a fun slant on a piece of history many probably aren’t aware happened and allows some great actors to showcase their skills at playing for style over substance. You have Anthony Mackie as the hardnosed beat cop handling the heroin epidemic in the inner city all on his own; Giovanni Ribisi lending his eccentric everyman as the brainy, wire-tapping pro; Robert Patrick literally coming off the cover of a dime store paperback; Michael Peña‘s amateur cop maturing under Patrick’s shadow; and Troy Garity skewing the farthest into parody with killing machine Wrevock. It’s an inspired cast of characters destroying Cohen’s livelihood one casino and drug run at a time with the ever-stoic Brolin at the helm. He and Penn go full-bore into their depictions to standout as Ryan Gosling and Emma Stone internalize their soft-spoken yet strong roles to shine as well. Everyone has their own style and all converge nicely to keep the film fast-paced and enjoyable.

It’s just too bad the finished product now has an asterisk by its name due to societal pressures forcing a bloody action flick to be politically correct. It’s a shame this is now the world in which we live.