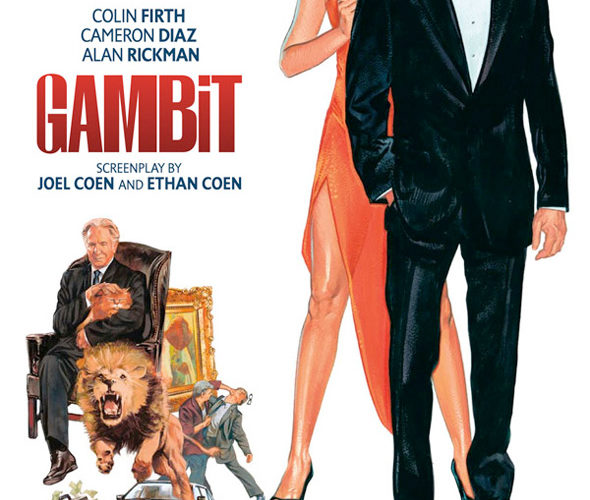 In November 2012, a film called Gambit, starring Colin Firth and Cameron Diaz, was released into theaters in Britain. It grossed less than $2 million in the UK and just over $10 million worldwide. However, despite its two starry leads and a script courtesy of the Coen brothers (yes, those Coen brothers), it was picked up by CBS Films, who have been holding on to it all this time. Now, a year and a half later, Gambit is quietly getting a release to those living stateside…on VOD, with a minuscule theatrical run as a courtesy.

Directed by accomplished journeyman filmmaker Michael Hoffman (A Midsummer Night’s Dream, One Fine Day), the caper is a remake of the 1966 Ronald Neame picture of the same name. That one starred Michael Caine and Shirley McClaine and is now regarded as something of a minor classic. This one will most likely fall short of that distinction. Concerning a silly plot against an eccentric, insanely rich businessman (Alan Rickman) conceived by his bumbling, belittled art curator (Firth), the remake fails to find the right tone at which to operate. A large part of the problem is the lack of chemistry between Firth and Diaz. The latter is stuck in a hyped-up version of the McClaine role, playing a Texas rodeo queen named PJ Puznowski.

Though Ms. Diaz is to be commended for the string of risk-taking roles (from Bad Teacher to The Counselor) she’s taken on as of late, this is one swing that misses by quite a bit. The broad strokes of comedy intended to come from Puznowski’s antics never match up with the dry humor that Firth has built so much of his career on. Rickman, one of the true great character actors, is allowed to have some fun as a one-percenter lacking any hold to reality, but not nearly enough.

There are moments of inspiration, specifically an extended sequence involving Firth running around a hotel in his boxers in an attempt to recover his pants, but we are mostly left wanting something funnier and smarter. At an abbreviated running time of 89 minutes, it feels like a film that’s been cut down along the way in an attempt at commercial salvation.

One imagines there is a story about the making of this picture, revealing the hurdles that ultimately pulled it all apart. Here’s hoping one day we hear the story, as it will most likely be more entertaining than the final product.