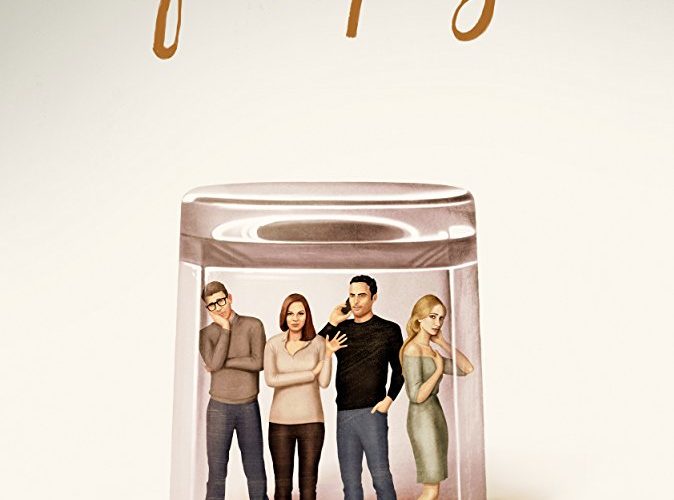 Review: ‘Fourplay’ is a One-Take Dramedy of Secrets and Resentment

It starts with the mixture of excitement and fear the result of a positive pregnancy test delivers before quickly moving into an impromptu hallway dance that ends with a crash of glass and a smack across the face. I’m not sure a better beginning to Dean Matthew Ronalds’ Fourplay would be possible as this sort of escalation of emotion and temper courses through the whole like a live wire of volatility threatening to derail what should be a joyous brunch between friends. In one moment these two couples consisting of hosts Tom (Bryan Greenberg) and Anna (Tammy Blanchard) opposite guests Joe (Dominic Fumusa) and Susan (Emanuela Galliussi) are in a celebratory mood and the next sees them frowning in silence, wondering how they’ve ever stayed together this long.

And at the center of this afternoon is the fact that Anna pregnant — news she doesn’t share with her husband. We can speculate why she keeps it secret after the aforementioned smack arrives via her hand and Tom’s cheek. There’s something going on between them, something that exists deep within to occasionally escape in just such a fit of rage. But they accept it. They pause in its aftermath and breathe, going their separate ways to cool down before trying again. We can chalk it up to the stress of her owning a restaurant and him recently deciding to start his own business. We can wonder whether their marriage is all but over, an admission to each other the next step after having already admitted it to themselves.

Now is not the time, however. Joe and Susan have reached their door with alcohol and optimism, the latter more manufactured than pure. It plays as though they haven’t seen each other in a while, but we’ll later learn these get-togethers are a weekly habit alternating between their respective apartments. The difference today is Tom’s big decision. He’s the man of the hour, a truth that proves perfect fodder for unavoidable turmoil. The cause is Anna: both her trepidation in pretending his career move is a good one for them and the fresh knowledge that they’re about to have a baby. She’s on-edge and it shows, but the way everyone acts makes it seem she always is. They tiptoe around her and yet their sarcasm grows mean regardless.

We move between them, the camera changing vantage points and rooms to follow each new pairing depending on the atmosphere. Sometimes they’re roaming around the living room to discuss feng shui and colors. At others they’re around the dinner table arm-wrestling. Tom and Joe may be smoking a joint by the window while Susan and Anna check chakras. Tom and Susan eventually air frustrations while Joe and Anna do the same elsewhere. Anna grows angry in direct correlation to Tom’s increasing sense of frustration and embarrassment. Joe’s rage arrives when Susan attempts to corral his inability to leave work at the door, her vocal opposition to his disrespect present for all to see. Neither pair is perfect and they’re just comfortable enough to let the other know it.

Written by real-life couple Ronalds and Galliussi alongside their friend Francesco Plazza, Fourplay unfolds in a single take bookended by a view outside of the Brooklyn Bridge. It’s a low budget, dialogue-heavy, black and white enterprise in the vein of other cinematic relationship stage-plays like Closer or We Don’t Live Here Anymore. While not as memorable as either of those examples, Ronalds and company do find themselves in the midst of a captivating dramedy boiling over with tension from frame one. They can get too caught up in characterizations that render each a bit one-note (Susan’s hippie sensibilities, Joe’s type-A machismo, Anna’s selfish resentment, and Tom’s martyrdom), but we forgive this reality because the story deals in contrasts. They’re intentionally opposites as couples and individuals for a reason.

We see their familiarity when paired off outside their marriages. We sense the myriad elephants in the room they try hard to suppress as a means for survival. These truths force us to hypothesize what’s really happening beneath the surface of “difficult love.” We presume “love” isn’t enough for their sustained happiness if it even still exists. This isn’t a jovial meeting between friends who are at ease in the slightest because everyone is obviously performing as a means of personal deflection. The whole feels like a chore they participate in out of habit, their backslaps and words of encouragement mere social necessities masking the fact that they revel in the other’s blow-ups for no reason other than breathing a sigh of relief it wasn’t them this time.

The question is therefore which of the four has the biggest secret — if you could even weigh them against each other. We assume the pregnancy is the unspoken smoking gun until more information arrives to prove a child is the least of Tom and Anna’s worries. We assume they are the problem couple because Joe and Susan are constantly breaking off to kiss in the corner until their own undercurrent of malice is exposed without warning. Maybe the way they talk to each other feels stilted and manufactured because of the one-shot format of the film or maybe it’s a product of deception for reasons we can’t even begin to guess yet. And as more alcohol is consumed, tempers flare until funny retorts become vicious stings of poison.

It’s the latter that delivers intrigue because we begin to feel as though they all hate each other. No one is too torn when bringing up potentially embarrassing facts about the others, but maybe that’s actually a sign of just how close they are? It could honestly go either way — especially considering the climactic reveals exposing the hypocrisy running rampant for years. But that’s how we all act, isn’t it? We judge ourselves against measuring sticks that don’t exist. We compare our lives to that of friends and either bask in our greatness or lament in our failures. We do it almost as though we hope to find ourselves performing a sanctimonious tirade to prove our superior value only to prove we’re the biggest hypocrites of all.

That to me is where Fourplay shines. Beyond the clunkiness of the single-take format that lets actors flub the starts of lines before soldiering through and the camera hitch as it finds its next position to ready for what’s coming is an authentic depiction of humanity’s self-righteous ability to plant its feet firmly into its mouth as a rule. It shows how bad things can get when we refuse to see reality, always wanting to believe it will get better with whatever new bandaged solution pops in our head. But that delusion only makes things worse. What could have been an amicable decision about a relationship not working becomes a powder keg explosion that risks ruining the lives of everyone else — perhaps even some yet to be born.