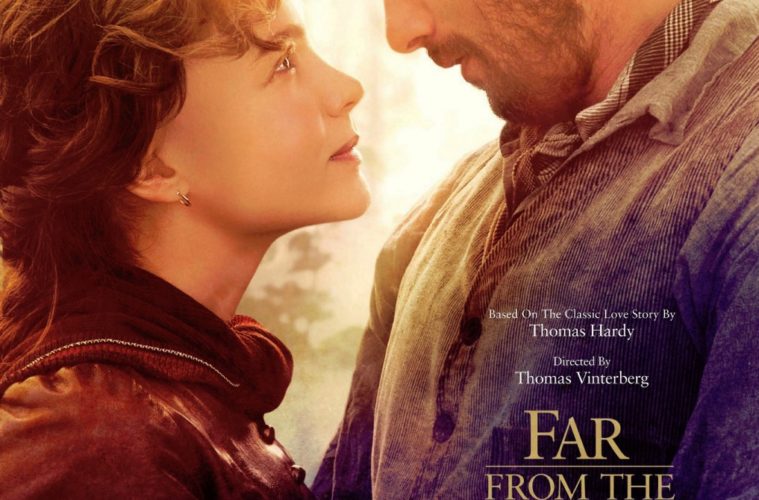 [Review] Far from the Madding Crowd

Following his piercing, bleak drama The Hunt, director Thomas Vinterberg is clearly having a great deal of perhaps needed fun with his follow-up, an adaptation of Thomas Hardy‘s classic novel, Far from the Madding Crowd. The preeminent kind of period piece, the late 19th century tale arrives with a heightened sense of self-awareness on what makes this genre tick. With sun-kissed cinematography, a swelling score, and back-and-forth romantic yearnings, this is a drama, despite feeling rushed in sections, intent on providing satisfaction above all else.

Opening in Dorset in 1870, we find Bathsheba Everdene (Carey Mulligan) working as a humble farmhand with her mother. Nearby is Gabriel Oak (Matthias Schoenaerts), an accomplished farmer who is immediately taken with Bathsheba, going so far as to propose to her, though she declines, partly due to their disparate social status. After a strikingly captured accident leads to the financial demise of his farm, he sets off to find new work. Unknown to him, in a tip of the scales, Bathseba receives a letter notifying her that she’s inherited her late uncle’s farm, one that has considerable potential if Bathsheba commandeers.

Moving to the more occupied town to become the “mistress” of the establishment, Gabriel, who clearly retains affection for her, happens upon her newly acquired estate and is hired as a shepherd. A character of few words, Schoenaerts mostly relies on shared glances and subtle movements to convey this publicly unrequited affection, and he pulls it off. Outwardly battling for Bathseba’s adoration are two men on different sides of the spectrum: first, her affluent neighbor William Boldwood (Michael Sheen) and then a little later in the story, the dashing but immature Sergeant Troy (Tom Sturridge), who still retains deep affection for his first love Fanny (Juno Temple), a woman he believes left him at the altar.

A student of the Dogme 95 movement, Vinterberg’s sensibilities translate wonderfully to this material. His handheld work with cinematographer Charlotte Bruus Christensen gives a warm sense of intimacy to each various relationship while establishing shots of the serene country are idyllically captured. Edited by Claire Simpson, there’s succinct touches such as a quick match cut of a hug when Bathsheba leaves her original home or some playful, concise construction when it comes to a letter of unintentional romance delivered to William Boldwood.

While these modest touches do wonders to speed along certain sections, some more important developments can feel rushed. Virtually the entire relationship with the one-note Troy and an underwritten Fanny feels lacking, leading to a state of emotional detachment when certain reveals kick into high gear. Clocking in at two hours, it’s understandable Vinterberg and writer David Nicholls can’t adapt the entire source material, but one wishes he fleshed things out a bit more for crucial sequences.

For a film featuring mass animal deaths and the corpse of a baby, it’s a testament to Vinterberg that he can turn what could’ve have been extraordinarily dour and stilted into something so exuberantly entertaining. A dreamlike, operatic adaptation, Far from the Madding Crowd doesn’t reinvent the period drama wheel, but it shows that with a committed formal approach and a strong ensemble, there is still life to be found in the genre.

Far from the Madding Crowd opens in limited release on Friday, May 1.