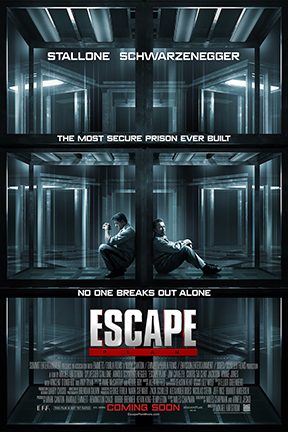 Escape Plan is a movie with unfortunate timing; it’s nearly twenty-five years too late to cash-in on its leading duo. The “future prison” actioner directed by Mikael Håfström marks the first significant team-up of Sylvester Stallone and Arnold Schwarzenegger. Sure, the Austrian Oak appeared alongside the Italian Stallion in The Expendables movies, but those were nudge-and-wink cameos; here, the two tackle the screen as the main attraction.

There’s a little rust on these vintage frames, but it’s not the two action icons that are old and out of shape. The wheezy script, from Miles Chapman and Jason Keller, is predictable and low on internal logic and Håfström, mostly known for a couple of stylish but empty horror films, doesn’t provide any verve or energy in the action scenes. At the end of the day, we aren’t looking for Citizen Kane here, just a simple frame that gets us in orbit of the two juggernauts and lets them spin off each other in entertaining ways. At a very basic level, Escape Plan delivers an acceptable Friday action outing but its running on fumes by the time the heroes are tackling the last phases of its considerable gauntlet.

Someone had to be the leading man here, and it’s no surprise that it’s Stallone, who’s stayed in the acting spotlight and is often capable of crafting headlining characters out of his out-sized persona. Sly’s Ray Breslin is a security expert who’s written whole books about his knowledge of exploiting systems and outwitting dubiously “impenetrable” prisons. He and his team—made up of a bored Amy Ryan and hideously out of place Curtis “50 Cent” Jackson—make a living out of installing Ray into government containment facilities and then breaking him back out, all in the interest of highlighting the chinks in prison security. When Ray finds himself tricked and trapped, a real prisoner of a mysterious high-tech fortress, overseen by the sinister but soft spoken warden Hobbes (an effective Jim Caviezel) he must inevitably team up with one of the criminals, the burly, boisterous Emil Rottmeyer (Schwarzenegger) to beat the system and mastermind a plan to extricate themselves from a maximum security nightmare.

Along the way the two throw a few punches at each other, and fire barb after silly barb at all comers, teaming up against brutes like Vinnie Jones and the unsurprising twists that flatten the action climax. Sam Neill shows up as a prison doctor, who wrings his hands and considers the two rebellious slabs of muscle with the same nervy suspicions that Alan Grant had for those brainy velociraptors in Jurassic Park.

I must confess that at a surface level I was tickled by Escape Plan and was rooting for it to entertain me. The production design on the prison itself is first rate, and convinces us of a treacherous, man-made environ that won’t be easy to crack. The guard uniforms, the glass cells, and the blazing lights of solitary confinement suggest the kind of science fiction pictures Arnie and Sly produced back in the day. Although they don’t have the same swagger they had when making the likes of Total Recall and Demolition Man, both guys throw themselves into their parts with relish.

Stallone has a better handle on his character, but Arnold is more fun to watch. In what amounts to a meaty supporting role, Schwarzenegger returns to some of the over-the-top, tongue-in-cheek machismo of Commando or The Running Man, without the limitations of running the show. Playing sidekick to Sly seems to have loosened him up a bit and there’s one real corker of a scene where he starts an unhinged rant in German as a calculated distraction so Ray can do his thing unnoticed. There’s some real, unforced chemistry here between these two when the script isn’t giving them some incredibly clunky things to say. “You hit like a vegetarian!” Really? You can sense that a great deal of effort actually went into preparing Escape Plan as the Arnie/Sly return-to-glory that it so obviously wants to be. When there’s been so much work behind the scenes to make this happen, it’s legitimately frustrating to see so little to show for it onscreen. The script was the wrong one, and there’s just not enough juice in the execution to carry these guys through. Even if this were the old days, Escape Plan would be a forgettable effort, putting all of the weight on its stars and hoping they carry the day.

While watching last week’s Machete Kills, I couldn’t help but feel that I’d much rather be watching a docu-drama about the life of star Danny Trejo. A young man who went to prison, reformed himself through boxing and turned his life around, only to end up with a B-movie career is compelling in a way that Robert Rodriguez’s tacky reel of action scenes wasn’t. I think Stallone and Schwarzenegger have arrived at a similar place. I liked watching these guys, but am no longer interested in seeing them play the same emotionally stunted death machines they specialized in during their heyday. They aren’t those guys anymore and it’s diminishing and exhausting to watch them try for it.

While I’m not suggesting something as meta as JCVD, the chronicle of a fading action star looking to age gracefully, teamed up with his long-ago rival, a disgraced politician trying to win back his fans, would be more interesting than what we get here. We don’t go to these movies for reality, but Stallone and Schwarzenegger could have the resurgence of fame they want if they simply trusted themselves more, and were willing to be nakedly honest about it. They have become more colorful than their characters, and they both deserve something better than Escape Plan.