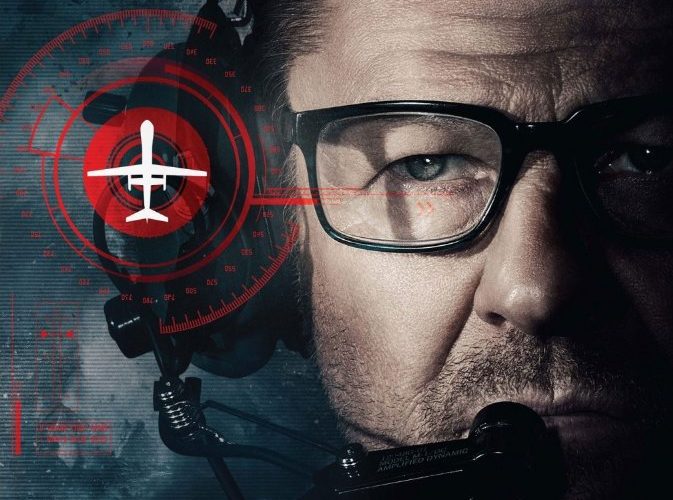 Review: ‘Drone’ is an Exploitative and Haphazard Thriller

The pitch “after a drone bombing in Pakistan, a Pakistani man flies to America to seek vengeance on the operator of the drone and his family with a bomb in his briefcase” is one that is steeped in hot button exploitation, and eye-rolling tackiness. Regardless of what twists and turns of morality are presented therein, that core conceit — the one that perhaps draws one to the film — will stand under this framework of fear-mongering and xenophobia. That’s a steep hill to climb for Canadian filmmaker Jason Bourque with his latest thriller Drone. This isn’t to say it’s not a hill worth climbing, if the filmic structure tackles the subversion of expectations, therefore using the initial pitch as bait to indulge people’s fear of the other before showing them why it is wrong to think this way.

Within the first act, it seems rather clear which side of the coin Drone falls on. What should be a simple narrative with complex ideas about the gray areas of war and perspective, is morphed into a muddled layer cake of thin story strands and half-formed thoughts. Before 30 minutes is up, we already know (deep breath): a Pakistani man is stalking Neil’s (Sean Bean) family, his wife is cheating on him, his son has trouble at school, he needs to write a eulogy for his dead father, he wants to sell his boat, and, of course, he operates drones. This is all after an opening that begins to set up a Pakistani family before bombing the father and then quickly jumping to America. With that sordid collection of ingredients, one is already left questioning how Bourque plans to wrap everything up with an hour to go — and tell a meaningful story in the process.

To put it plainly, the answer is that he doesn’t. Almost every single one of those aforementioned elements barely reach a climax. When they do, it is about the extent of a line of dialogue with no consequences, or is briefly brushed over, leaving a head-scratching narrative that feels utterly devoid of complexity. Things are set up that don’t pay off, and moments that should hold weight and impact the characters are forgotten for the very fear-mongering the film should be critiquing.

Any plot thread that does reach an end is handled with such blunt force that they may as well add a silent film-era text card that tells you what the point is, just to be clear. There are indicators early on that subtlety isn’t the chosen path as multiple characters get quick flashbacks to literally point to their emotional state at that moment, suggesting a lack of genuine characterization.

In one scene, a white suburban man and a Pakistani man sit in a children’s park. The former says, “In this country, we don’t like strangers. Especially strangers like you. Why don’t you go to a Mosque and read that little book of yours.” Within the context of this narrative, it is about as subtle as a sledgehammer to the temple. It is the sort of attempt at closed-system writing and thematic resonance that comes across as a hand so heavy it can barely lift itself to turn the page. By the time the climax rolls around, and the tension mounts, it is hard for the entire thing to not feel like parody. With the thinly-sketched characters and minimal amount of effort thrown behind the plot, very little feels genuine. There is a well-directed and brutal scuffle, but it is so out of place that the eventual bloodshed is a ghastly indication of the film’s own confusion with its material.

A film at odds with itself, at times it is a familial drama and at others a high-stakes parlor-room thriller, leaving each to feel underdone. Bean’s naturalism and ease helps a lot (he is really quite good), but it is not enough to carry a film that feels this narratively exploitative and haphazard. If awareness and empathy is trying to be taught, a documentary would perhaps be more poignant, and less painstakingly obvious. In the middle of the film, Sean Bean states about his eulogy, “I just need a good opening. Then the rest will follow.” By this indicator, perhaps Drone was destined to crash.

Drone is now in limited release and on VOD.