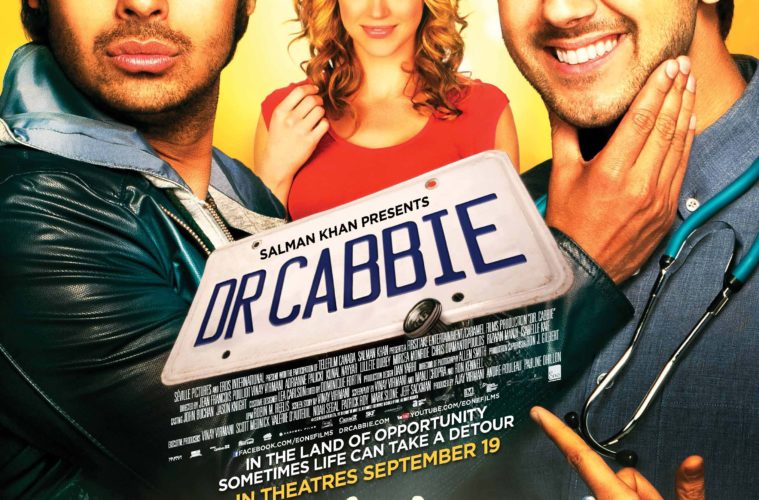 Sweet and silly, Dr. Cabbie follows in the footsteps of broad Bollywood and Canadian comedies melding both sensibilities into a contemporary narrative that’s as much political as it is rooted in national identity. Starring and co-written by Canadian-born Vinay Virmani, whose carved out a niche from himself in this picture and the Toronto-based Sikh hockey film Breakaway, Virmani plays Deepak, a young doctor whom immigrates to Canada with his mother (Lillete Dubey). His dreams are shattered when he learns despite a shortage of doctors in the Province of Ontario, he’s unable to practice medicine without a four-year residency at a Canadian hospital — essentially he will have to repeat his training.

Feeling low, he goes for a walk around Young Dundas Square where he randomly (these things always happen in Bollywood films) meets Tony (Kunal Nayyar), a womanizing cabbie unafraid of the cat call. Tony takes Deepak back to the shop and gets him hired as a cabbie. The problem? He can’t drive nor does he know his way around the city, but he can and does offer advice including to their boss Pete (played by the great Steven McHattie), who has been diagnosed with cancer but can’t seem to get the right kind of care. Deepak’s reputation as “Dr. Cabbie” is cemented after he delivers a baby in the cab during a traffic jam, becoming a darling of social media and front page news in town. The mother, a young lawyer whose is forced out of her firm, Natalie (Adrianne Palicki) comes with several strings attached, including the Baby daddy, Colin (Chris Diamantopoulos), a lawyer with his eyes set on becoming mayor of Toronto. As much of a degenerate as he is, to be fair, he never smokes crack on screen — not even in a drunken stupor, although he has a few of those.

Functioning as light satire, Dr. Cabbie never quite digs deep enough. Despite several laughs along the way, something perhaps doesn’t quite translate here as Deepak essentially operates an illegal clinic in the back seat of his cab, leading to the kind of consequences you’d expect. For a political comedy that is as broad as it can be, short of reaching the lows of Dumb and Dumber To, it has an interesting premise and something to say but it often does so in a way that’s not particularly original. Beyond a few sketches, things proceed too much like a cartoon, lacking a kind of poignancy found in the film’s first scenes in Delhi, India.

Directed by Jean-Francois Pouliot (Seducing Dr Lewis), the story quickly abandons one interesting area that it can develop (such as the fact the entire cab company is comprised of immigrant PhDs that are stuck in limbo due to Canadian accreditation systems) to develop others that are quite run of the mill. This includes a romance between Natalie and Deepak, as well as Colin as a carbon copy movie villain with little new to offer. Perhaps the satire may play best amongst South Asian-Canadian audiences, as there is a nuance that was lost upon the multiplex audience I screened it with in New Jersey. An excellent film, albeit a less broad one, could be made of this material and charming films have been made of the Canadian immigrant experience from fun Bollywood-Vancouver romance Neal ’N’ Nikki to the assimilation narrative wrapped at the heart of the sports drama of Breakaway,  but Dr. Cabbie does too little with some interesting ideas.