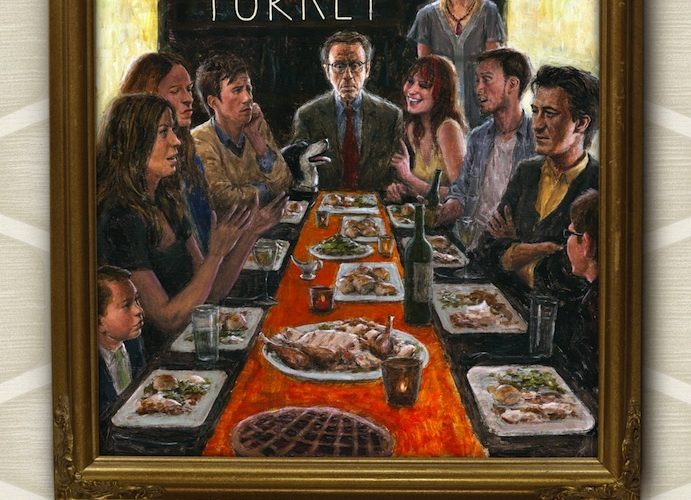 The lesson to be learned from Will Slocombe’s Cold Turkey is that you should never confide family secrets with the uncontrollable loose cannon of the bunch. Because no matter how many stupid things you’ve done, or how many times Dad saved your bacon by bailing out your incapacity to take responsibility for your actions, it’s the crazy psycho messenger who should get the blame. And while I initially meant that statement as sarcasm, I know now that at least the third part holds true when said messenger ends her blanket confession of everyone else’s sins by lodging a fork into her stepmother’s shoulder. Yet somehow she’s still allowed a poignant confession about how the family made her that way because they needed a scapegoat and she was furthest away? Sorry, I don’t buy it. Maybe not being a child of divorce makes me ill-suited for the film’s actual message of forgiveness and personal responsibility due to its desire to blame Poppy (Peter Bogdanovich) for catalyzing the whole thing by sleeping around with students while his wife and kids were at home. I get why Slocombe exacerbates things out of control so everyone can own up to their shortcomings, but there is a distinct lack of just desserts to not make me want each character to choke on a turkey bone and die. Poppy’s three kids may be from two different wives and he may not have been around for any of their formative years, but he certainly instilled whatever dysfunctional baggage he possesses via genes, abandonment, and his ease at Band-Aiding problems rather than finding an actual solution.

This is why Lindsay (Sonya Walger) fights against a desire for her own infidelities to the point of her marriage to TJ (Ross Partridge) being a stone’s throw from divorce. It’s why her sister Nina (Alicia Witt) violently flies off the handle whenever threatened because the only reason she ever talks to anyone besides her half-brother is to receive the handouts she believes she’s owed as a result of having a crappy childhood. And Jacob (Ashton Holmes)—well his being so much younger than his half-sisters and actually having Poppy in the same house as he grew up made him want to be his father so much that he took the kind of shortcut about to leave him with two broken legs before the law degree he more than likely doesn’t even want.

All three kids would rather lie than tell the truth; they rile each other up so that they will seem more normal in comparison; and none actually respect Poppy’s second wife Deborah (Cheryl Hines) despite her being the most sane and likeable of the bunch. She might have broken up his marriage to Lindsay and Nina’s mom, but that was a foregone conclusion whether it was she or another mistress. The girls refuse to see that truth due to their stubborn selfishness rivaling their alcoholic father’s and Jacob is simply too close to the situation being the default “favorite” because of proximity to function. It all leaves TJ and Jacob’s girlfriend Missy (Amy Ferguson) on the outside looking in while Poppy and his offspring walk the plank towards abject loneliness, unafraid as long as the rest go too.

The film is chock-full of familial drama that desperately wants to be taken seriously yet never fully can because it’s wrapped inside a comedy looking to make light of said drama at the same time. The result is an off-putting Thanksgiving holiday reunion that spirals out of control as soon as it’s known Nina will be attending for the first time in over a decade. Don’t get me wrong, though, it would have been a disaster anyway. Her inclusion only gives the rest a person to blame for their own nonsense despite their “together” façades. No matter how bad Nina is, at least she refuses to pretend she’s something else. She lives on a commune, has a chauvinist slob of a boyfriend (Wilson Bethel’s Hank), and could care less about anyone else judging her for it. By the end everyone’s unsurprising secrets are revealed as the past comes back to haunt them and their complete lack of compassion for anyone but themselves pushes away those who’ve loved and put up with them thus far. Unfortunately, none of it seems to matter to any of them after the initial shock of having their dirty laundry aired. It’s as though they all knew the bottom would fall out eventually, so when it does they simply let it. This attitude is too cavalier for me to compute—these are despicable characters that don’t even genuinely ask for forgiveness. They merely pout, try to blame someone else, and accept their fate while those they hurt disappear to safety from the sinking ship. Yes people are inherently selfish, but Cold Turkey almost champions this fact.

Witt, Walger, and Holmes each come off as aloof and despicable—no matter what their motivations might have been or the guilt they felt while the truth remained hidden. They should all be applauded for that because I genuinely think it’s the point. In contrast, while Partridge and Ferguson come off as doormats and therefore unsympathetic until finally putting their foot down, it’s Hines who stands alone as not only the most normal but also the strongest. She tries so hard to be the mediator and make sure everything horrible her zoo of a family is capable of doesn’t explode all at once. Her Deborah is exactly what Poppy needs to keep him honest, but unfortunately she isn’t enough. Bogdanovich does well instilling the bottomless pit of regret beneath his stoic, alcohol-induced surface and proves how well-laid plans are never foolproof.

His family will make you thankful for your own because whatever horror stories you may have, none will hopefully be as dysfunctional as this. Slocombe crafted a mean movie populated by bullies and victims alike, each one feeding into his plan for fated implosion. I believe the film is exactly what he wanted it to be and should entertain those of like mind who might have lived with divorce and dealt with the struggles such reality holds. I’m simply not among them. The whole time I wished it would turn farther into farce with Hines tying everyone up and torturing them until a modicum of respect was beaten into their souls, but it never happened. Instead cowardice was substituted where love should have been and way too many lives were ruined with little to no remorse.