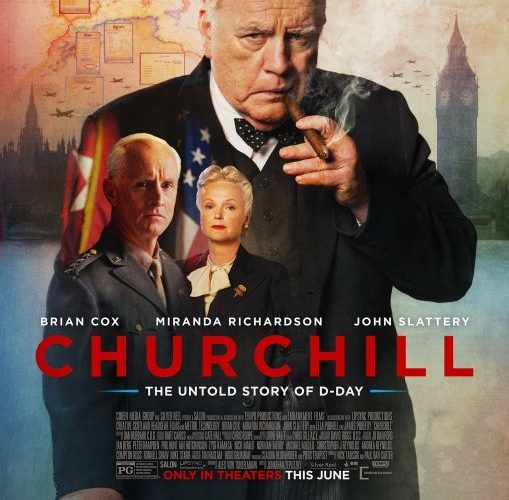 Review: ‘Churchill’ Looks at a Leader’s State of Mind Before D-Day

I’m far from a history buff. To me Winston Churchill was a pillar of strength that helped take down the Nazis and declare victory for the Allied forces against fascism. I don’t believe that’s an ill-advised description by any means, but it’s definitely a shallow one. Here we are half a century removed from that carnage and our memories are mostly divided into two categories: good and evil. The latter holds the Holocaust, genocide, oppressive regimes, the suspension of freedom, and some of our species’ greatest villains. The former contains pride, valor, hope, and success with names like Churchill, Eisenhower, and FDR rising to the status of sainthood. But the truth is much more complicated. Heroism and leadership co-exist with aching regret. Even the greats must combat defeat. It’s this reality that historian Alex von Tunzelmann touches upon in her script Churchill. A depiction of the titular Prime Minister’s state of mind during the month before D-Day — condensed to the 96-hours preceding the Normandy invasion — her account chips away at the pristine façade of unwavering vigor decades have built around him. One could call the entire film a lead-up to what’s proven his greatest speech, the hesitation, fear, and demon-fueled uncertainty threatening to consume him when his country and the world needed stability and unity most. From the nightmarish view of bloody water washing ashore as Winston (Brian Cox) recalls the frontlines of Gallipoli strewn by corpses to the acceptance of risk as the sole means to achieve victory, we see immortality’s immense toll.

As directed by Jonathan Teplitzky, the film carries with it a theatrical style heavy on dialogue with everything portrayed in close-up besides some very attractive wide shots setting each scene. I don’t say this as a slight to the aesthetic, but instead to highlight the fact that this is a work heavily reliant on performance. It’s a good thing too because we’re all keenly aware of what’s happening plot-wise and therefore find ourselves more interested in how these specific players react. D-Day occurred and thousands died for it to succeed in turning the tide. The filmmakers aren’t interested in simply showing that again like countless previous times. There might be a rallying speech from Bernard Montgomery (Julian Wadham) included, but the meaning is far-removed from generic battle cry.

Rather than be about the soldiers giving their lives, Churchill is about the leaders who don’t. It’s about men who’ve fought before but no longer can because of their current duties. We’re provided a look into their minds as the burden of holding so many boys’ futures in their hands eats at their soul. Some take it to heart as a necessary evil towards strategic importance (John Slattery‘s Dwight Eisenhower) while others find its weight too powerful to bear (Churchill). We watch as politics play a role in this chess game above “honor”. Where the latter knows he can only respect himself if he too were on those boats, the former realizes a leader’s true worth is in surviving to keep supplying his nation hope no matter the outcome. While those sentiments are intriguing, I’d be lying if I said an entire movie focused upon them was a good idea. The greatest war films are those able to show the fight while retaining that sense of humanity and humility alongside it. Something about this spotlighted look at Churchill’s reservations towards the most famous war assault in modern history risks tainting his legacy more than bolstering it. To admit that is to expose what we’ve been conditioned to accept — decisiveness and confidence as leadership qualities. We’d rather watch as someone stands by his principles and shoves them down everyone else’s throats when he’s correct than witness someone being ignored when he’s wrong. What the film depicts isn’t weakness, yet it’s difficult not to see it as such.

It doesn’t help that this is a Winston Churchill heading into the twilight of this life. Teplitzky is quick to give us visual metaphor with memories as this mountain of a man succumbs to his deep-seeded guilt, the kind that cultivate a feeling of psychotic break despite their haunting beauty. It’s one thing to touch upon this icon’s battle with depression and fallibilities as a husband, politician, and man, but it’s another to cut to those men who respect him constantly talking about him being a shadow of the legend he once was. These are the types of asides we experience in a film moving towards an inevitable forced retirement home pasture or even worse: a grave. These aren’t the underestimations of those soon to be proven wrong.

Teplitzky and von Tunzelmann go too far stripping him bare as I found myself looking behind a curtain of artifice force-fed into me since a young age. I wasn’t seeing the regal Churchill photographed with cigar alongside Allied greats. This was a broken old man fumbling around in the dark while a younger generation dismissed him as a figurehead who only needed to help feed their ideas and plans to the British public. The majority of the runtime is spent watching him fall apart until caught in a catatonic state nobody can shake him from. We watch as he screams about how he’d do things differently only to be figuratively kicked to the curb like a spoiled brat no one wants to play with. It’s a sobering depiction. Cox plays it splendidly despite the character being written as someone earning more pity than sympathy. Slattery and Wadham are equal to the task as they enforce their dominance over him (the former’s Ike allowed room for pause and contemplation to project complexity beyond his role as ideological opponent). And only Clementine Churchill (Miranda Richardson) inches her husband closer to empathy, her tough love meant to prevent his ego from blocking the truth rather than simply shut him down. We get a sense of her frustration as Prime Minister’s wife and see her as the rock he desperately needs. Unfortunately she’s not enough to steady his course alone. A secretary (Ella Purnell) who idolizes him must also provide context for his worth, manipulating eye-rolls into score swelling tears.

It’s too bad because there are many pieces of the whole that work — none more than Churchill’s rousing oration of the aforementioned speech after D-Day’s first wave ends. But where the second-guessing and borderline sabotage are meant to make him more relatable and subsequently stronger for having the courage to combat personal failings and be the man his people need, they made it hard for me to see his fierce words at the conclusion as more than an orchestrated act. This man seen being defeated by the Americans in command, his king (James Purefoy as George VI), and his trusted confidant (Richard Durden‘s Jan Smuts) is suffering an existential crisis away from the history books’ gaze. Suddenly his greatness is shown as the exception and not the rule.