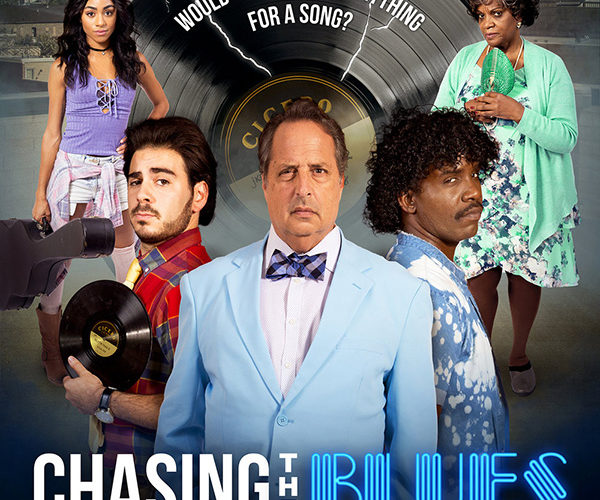 Review: ‘Chasing the Blues’ is an Enjoyable Record-Seeking Road Trip

The rarest of items can claim a collector’s soul if he/she isn’t careful. When that item — something thought to be merely myth — is held in your hands, you never know what you might do to ensure it stays there. Some collect for the thrill of the chase, others for the sense of ownership possession provides alongside the jealousy it instills in those without. Which one you tell yourself you are isn’t necessarily the truth, though. We want to believe our intentions are pure, but the allure of victory is a potent thing able to push us past a line we never believed we could cross. This is the point where Alan (Grant Rosenmeyer) and Paul (Ronald L. Conner) found themselves twenty years ago.

This is what derailed them, turning their teacher and record shop owner respectively into criminals. They each wanted an elusive copy of a master vinyl thought cursed by the artist’s dark deeds — a pressing so tortured and infamous that only two copies of the original four still (potentially) existed with the others having driven their owners to suicide. This record was inexplicably found in the collection of an aging woman (Anna Maria Horsford’s Mrs. Walker) who wouldn’t know the value of anything she had, so they arrived at her door with smiles hiding the scowls they threw at each other. The results of this standoff would land them in prison, the specific reasons yet unknown. And that’s exactly where we meet Alan.

Director Scott Smith and co-writer Kevin Guilfoile’s Chasing the Blues opens with an eccentric gentleman (Jon Lovitz’s Lincoln Groome) entering a visitors’ booth to talk with this former high school teacher about a find he knows will interest him. Groome is sitting on a storage unit of unclaimed vinyl left behind after its owner’s death. While working with the state to find who should inherit this collection, he discovered Alan’s incarceration was somehow connected. So why not offer him a chance upon release to get that which he so coveted? Why not extort him for some easy money and let one little record walk away that nobody was worried about in the first place? All Alan has to do is get to Baton Rouge and make the exchange.

This road trip is the backbone to the film and the cause for us to discover what happened in Mrs. Walker’s apartment so long ago. The latter arrives thanks to a young guitarist named Vanessa (Chelsea Tavares) who takes a shine to Alan and his story. So we shift back and forth from the present and past as more details are revealed over pie and long stretches on the bus. We get to know both Alan and Paul in these flashbacks, understanding the hold this record had on them to strip their morality and empathy away. What’s more, this disc possesses a sort of lie detector for the soul. If only they could listen to it, they could see exactly how much darkness existed in their own hearts. That last bit is sort of a test for ownership. Think of the Holy Grail in Indiana Jones and the Last Crusade because only the purest of heart can survive a stylus hitting its groove. This record corrupts with silence just by worming its mystery into the back of people’s minds, a psychological siren calling them to a power that transcends money. It draws Alan and Paul to this old woman, pitting them against the other to use her as a means to an end rather than someone deserving the utmost decency. It pushes them into a corner and sees what they’ll do to claim it as their own. And to see Alan’s face when Groome explains his proposition shows how no amount of time could quell his yearning.

Chasing the Blues works best when it takes us back to 1987. Horsford is a delight as Mrs. Walker, the obstacle they must defeat and/or dupe. Her innocence always provides the opportunity to reveal how deranged they’re willing to become and both Rosenmeyer and Conner fall in line to dote upon her with saccharine fakeness, biding time until they can take advantage of the smallest mistake. Some antics are more crass than others (Did one really need to relieve his bladder in a potted plant while she stands beside him?), but for the most part they deliver enough charm and moral quandary to keep our interest. Their cat and mouse is fun because they’re more similar than they’d ever admit. If not for competition, they’d probably be friends. The budding relationship between Alan and Vanessa is a bit too pointed for its own good as allusions of mistrust and partial evidence towards why keeps us questioning motives and thus prevents any surprises from being all that surprising Lovitz’s smarmily sinister theatrics here are good, but the role is a very brief set of bookends. The color he injects is great — just don’t expect leading role heft. The same goes for Steve Guttenberg hamming it up in two scenes as an acquaintance of both collectors. Seeing these two onscreen with Horsford should transport you back to their comedic heyday of the 80s and 90s regardless of how much they’re given to do. It’s a nice selling point.

And it all combines for an enjoyable if slight adventure. This idea of a record that can see into your soul and know whether you’re better than your actions is perhaps heavier than it’s allowed to become, but it adds enough intrigue to keep our hopes alive that Alan and Paul will eventually get to find out for themselves. There are a few great one-liners that earn legitimate guffaws thanks in large part to Rosenmeyer and Conner’s rapport too. Their rivalry is the lifeblood of this project. If you can’t buy into their pratfalls and sarcastic anger, the whole can easily fall apart. Luckily they’re quick to endear themselves to us so we can look past any hiccups and let their sitcom antics sustain a brisk sub-80-minute runtime.