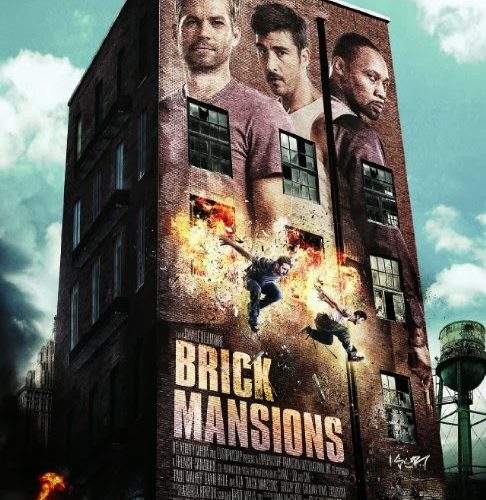 A few months back I was watching a small indie thriller called Hours, and was surprised with a personal revelation; I’m going to miss Paul Walker in the movies. Never an actor of great range or variety, Walker built his name off B-grade actioners that were sometimes graciously marketed as A-level flicks. Within that niche, Walker exuded a certain charm and bemusement that made you feel at ease with the absurdity, and it wasn’t more than twenty minutes into the Luc Besson-produced Brick Mansions before I was met again with that curious thought. These types of films are going to be less fun without Walker pushing them along.

Although we’re sure to see Walker again in the next Fast and the Furious film as Brian O’Connor, it’s likely to be a heavily edited and truncated send-off as opposed to a starring vehicle. This makes Brick Mansions the last proper film for the actor, and in a certain sense it’s a fitting coda, encapsulating a little of everything that fueled his action career. Although I personally preferred the aforementioned Hours, which let Walker stretch his acting chops as a desperate father trying to protect his newborn child, this Friday night action mash-up focuses on the things that made him a star and fans will no doubt embrace that, even if the film itself is reheated dystopian leftovers.

Let it never be said that producer Luc Besson can’t get maximum mileage out of a thin concept. For those surprised that he culled enough resources for soon-to-be three Taken movies and soon-to-be four Transporter films, consider that Brick Mansions is really the third iteration of an idea that, itself, was just a restructuring of John Carpenter’s Escape from New York, sans eye-patch and with more parkour.  Essentially a remake of 2004’s Banlieue 13 (District B-13 here in the states), Mansions moves the action from a futuristic walled-off slum in France to a similar model in Detroit, where abandoned real-estate has become the home of assorted gangsters and riff-raff, all of them locked-in by a police-infested city. French stuntman David Belle, one of the founders of parkour, was the star of the original films and returns here in a variation of the same role, playing ex-con Lino, who must team-up with Walker’s undercover cop Damien Collier to take down the criminal overlord of the Mansions, Tremaine Alexander (RZA). Collier is out for Tremaine for two reasons; one of them is vengeance for the long-ago murder of his father and the other because the gangster has a live neutron bomb attached to a warhead and aimed at the rest of Detroit. Lino’s motivation is to save his kidnapped girlfriend (Catalina Denis), who shows up in the plot as mostly a bauble to be jostled about, threatened, licked once (by the film’s other female actress) and eventually rescued. The most fun the movie has to offer is the often silent chemistry and camaraderie between Walker and Belle, as the former has to figure out the clunky American action equivalent of the latter’s graceful, high-intensity martial arts.

The plot and its simplistic racial dynamics were not fresh in 2004—demographically, both Brick Mansions and District B-13 are all minorities, while whites run the political machine and the infrastructures. Most of what I remember about that first film was Belle and the parkour stunts, the whole thing playing out like a retro video game mash-up where Sonic the Hedgehog got to throw-down with the burly bosses of Double Dragon. That movie amnesia is probably helpful, because I was able to discover the sublimely dumb corners of the story all over again here, although the transition from France to America does result in some odd societal perceptions.  The Detroit of this movie is like an apocalyptic wasteland where hospitals and schools have been leeched out in favor of maximum security and gentrification becomes a kind of sci-fi term that lurks under the absurdity of Mansions’ four year deadline on its future. You would have figured Besson would have remedied that mistake from the last go-round. District B-13’s far-flung date for its grim miasma was 2010. As silly as the set-up is, there’s some juice still left in the execution, and director Camille Delamarre, who cut his teeth editing some of Besson’s other efforts, stages the action with a ragged intensity that balances the jump-cuts and elaborate stunts with an technical grace that borders on artistry. There’s leaping, jumping, kicking, stunt-driving, diving through car windows, and enough hand-to-hand combat to make the blokes from The Raid jealous. The derelict homes are a nice visual shift from the ghettoized fortress setting of the French films, and the cinematography gets a real work-out in the reckless final third. The problem here is the same as the source material, whenever the film slows down to talk or share some of its vapid thoughts, it grinds to an almost listless halt.

The improvement between the two is down to Belle, who isn’t just a better practitioner and fighter now, but also a more natural actor and performer, and Walker, who manages to make affable amazement at his partner’s acrobatic skill a beguiling character point. When the pair spar back and forth with the crumbling dialogue, you get a sense of the mirth and tension beneath it and that’s not a quality that all action stars can achieve, especially when it comes to buddy movie dynamics. RZA’s Tremaine is a stilted and limp villain, and the female community is both under and misrepresented by Mansions, but this show belongs to Belle and Walker, who lift it up and make it more entertaining than it had any right to be. On behalf of all the action trash that will never feel that benefit, may I say again Mr. Walker, you will be missed.