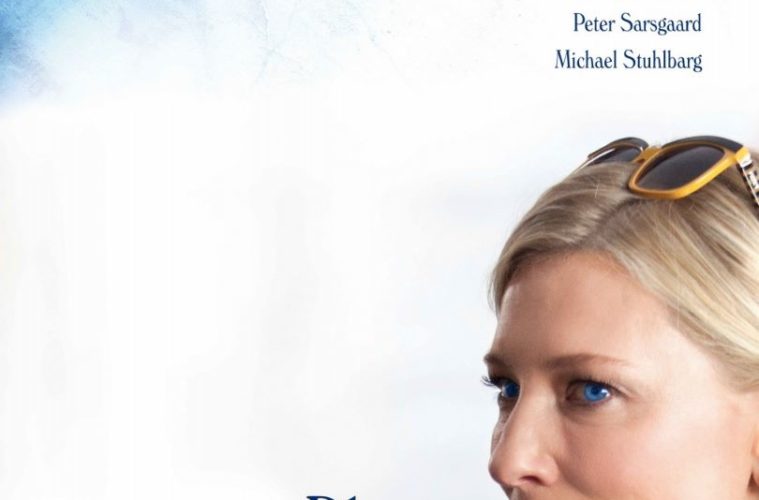 Woody Allen‘s Blue Jasmine begins with a cross-country plane ride: Jasmine (Cate Blanchett), the former wife of a Manhattan investment player (Alec Baldwin), is moving (temporarily, she hopes) to San Francisco to stay with her sister, Ginger (Sally Hawkins). During the plane ride, Jasmine, impeccably dressed for a woman who claims to be dead broke, spends her time jabbering vaguely in the direction of the older woman sitting next to her; it’s almost as if she’s talking to herself (an idea that will be returned to on several occasions). In the midst of this calmly insecure venting, Jasmine lets slip a noteworthy piece of information: that she quit college after falling in love with Hal (Baldwin). At this point, she’s not merely reminiscing about Fifth Avenue apartments or shopping-spree afternoons at Jimmy Choo; she’s going all the way back to her college days, when she gave up a degree to marry a man. It’s the kind of character detail that casts a shade of regret over the entire film.

After touching down in San Francisco, Jasmine isn’t too overjoyed to learn that Ginger lives next door to a café in a confined, shaggy-dog apartment. (It’s worth stopping here for a moment to clarify the nature of Jasmine and Ginger’s relation: they aren’t blood-related, but they were both adopted and raised by the same parents.) Jasmine meets Ginger’s two sons, and then heads straight to the liquor counter, where she pours herself a Stoli martini—the first of many she will consume over the course of the film. Allen takes some time here to introduce us to Ginger’s romantic history: she used to be married to the burly Augie (Andrew Dice Clay), but a sour investment experience with Hal and Jasmine led to that relationship’s demise; her current boyfriend is Chili (Bobby Cannavale), a mechanic with a loud personality. An interesting tension is created when we learn that Chili was planning on moving in with Ginger until Jasmine suddenly informed her sister that she needed a place to stay. Cannavale does a superb job of evaluating the character’s motivations: his aggression towards Jasmine may be read as brutish by some, but it’s really more a reflection of the warm, generous love he feels for Ginger.

It’s around this time, too, that Blue Jasmine announces its curious structure, which involves frequent flashbacks to Jasmine’s high-flying time in New York City. Allen provides valuable glimpses of the life Jasmine and Hal led together: the way he’d downplay legal concerns while having lunch with friends; how he’d shamelessly ask Jasmine to go to a Yankee game, knowing she wouldn’t want to, thus giving him a documented reason to take another woman; the way Jasmine’s face would light up when she was hosting a party, unaware that Hal’s discussions with other women weren’t at all platonic. There’s a borderline scary scene in which Jasmine confronts Hal about her eventual suspicions, and it’s unclear whether her enraged, professed ownership of him is an expression of love or a panicked effort to confirm her security within this lifestyle.

There are some glitches in the back-and-forth conceit of Allen’s screenplay: the New York saga builds up to a climactic revelation, so certain scenes feel a bit like dead weight that don’t breed insight so much as they simply maintain the consistency of the flashbacks. Their presence also has the effect of stunting Jasmine’s present-day activity on the West Coast: it’s hard to imagine a happy ending for Jasmine as she continues to get drunk and pop pills, and the reliance on the flashbacks only serves to intensify this feeling, giving the impression that we’re not so much waiting for Jasmine to move forward as we are waiting to learn what’s led to her devastating downfall. The story, then, becomes one of reflection over action—but it’s not easy to reflect when all the pieces aren’t in place until the very end.

In other respects, however, the multi-faceted timeline works wonders. Blue Jasmine is Allen’s first U.S.-set story since 2009’s Whatever Works, which itself was preceded by a handful of overseas tales. The writer-director steps up to the challenge with an ambitious attempt to capture two very different American cultures in a single movie: the hilly, homey, laid-back textures of San Francisco, and the dollar-sign-driven New York City Allen has depicted so many times before. In fact, Blue Jasmine probably marks one of the least-romantic visions of New York we’ll ever get from Allen: there are no real signature, picturesque shots from cinematographer Javier Aguirresarobe, and the film’s relevant inquiry into pressing economic issues (reflected, above all, in the modestly tragic arc of the Andrew Dice Clay character, whom the actor plays beautifully) turns the city into a cold vacuum. Even Hal and Jasmine’s parties—filled as they are with attractive, stylish, rich people—don’t have the power to charm, because they’re filtered through Jasmine’s now-mutilated psyche.

Blanchett’s already-great performance gains gravity from these juxtapositions, too, particularly as her attempts at sanity in San Francisco become more and more futile. For work, Jasmine accepts a receptionist position for a dentist, Dr. Flicker (Michael Stuhlbarg), who develops a crush on his new employee. At Ginger’s suggestion, Jasmine tries to break into the interior-decorating business through some online courses. Frustratingly, she doesn’t know how to use a computer, so she has to take classroom computer classes before she can begin taking online interior-decorating classes. This is one of the more painful ways in which Allen investigates how a woman of Jasmine’s age and stature would operate in today’s America after being thrust back into single life: she’s still alluring enough to attract new suitors (a slimy Peter Sarsgaard, playing a diplomat with political ambitions), but she’s old enough that a professional fresh-start of any kind would be a strenuous, uphill battle. The harsh incongruity between Jasmine’s life under Hal and Jasmine’s life under Dr. Flicker (answering phones and making appointments while being awkwardly hit on) is almost too much to handle.

While gripping in its brutality, this overbearing cynicism sometimes has the effect of alienation: after watching Allen’s splendid 1984 Broadway Danny Rose the other day, it’s taxing to be met with a film like Blue Jasmine, which adopts such a damaging viewpoint on the nature of contemporary romance. Watching Blanchett and Sarsgaard court each other is like an exercise in hypocrisy: he wants her for his political image; she wants him because she’s desperate and broken. (Louis C.K.‘s character is peculiar, too, but there’s no need to spoil what he has in store.) Hawkins’s Ginger is an odd case: Allen, I think, sets her up too didactically as a foil for Jasmine, but the actress, who was very charming in Allen’s underrated Cassandra’s Dream, does justice to all sides of the character, from her disheveled appeal to her desire for companionship to her misguided selfishness. Baldwin himself is troubling in the flashbacks: he plays Hal coolly, like a cipher, and he approaches his marriage and affairs as if they were lunch meetings with his lawyer.

But Blanchett remains the dominating force. Each scene of the film is like a variation on Jasmine’s breakdown, and the actress colors every one with rage, vulnerability, anger, and torment. It’s the type of role Meryl Streep would do well to latch on to more these days: a complex original character that a powerhouse actress can turn into a film-driving locomotive. The role’s countless dimensions are even mirrored in the film’s title, which has no shortage of meanings: Jasmine is, of course, the character’s name, but it’s a manufactured name (she was born Jeanette); there is the bluesy score, too, as well as the song “Blue Moon,” which is heard and discussed often; and then there’s the flower, which we’re told only “comes to life after it gets dark.” For Blanchett’s Jasmine, this is a shattering fact, because I’m not sure there’s a single exterior shot in the film that doesn’t take place during the daytime.

Blue Jasmine opens in New York and Los Angeles on July 26th, and will expand to more theaters in the coming weeks.