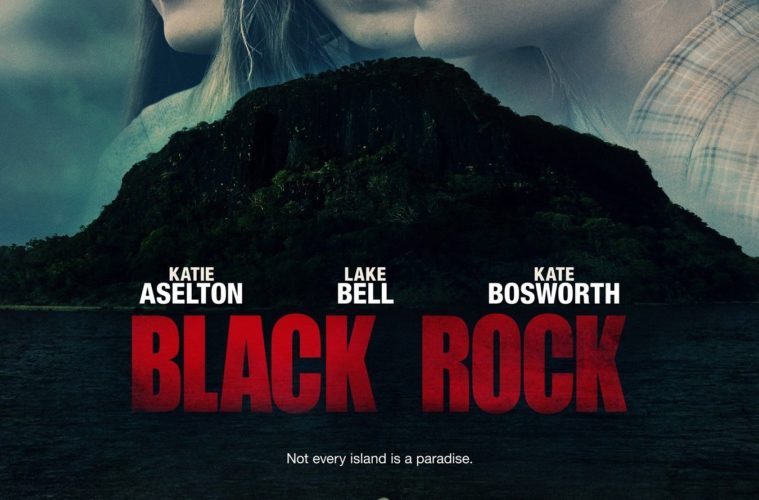 There’s so much promising talent behind the new thriller Black Rock, that it’s initially disappointing when director Katie Aselton and scribe Mark Duplass reveal their movie to be nothing more than a generic, women-in-peril scenario. The desolate, isolated Maine island the female protagonists find themselves on becomes a kind of stand-in for the ghettoized sub-genre of survival horror, and as they fight or flee the homicidal war veterans who pursue them, these gals seem to be struggling against decades of misogynistic clichés.

When the husband-and-wife duo of Duplass and Aselton (who also co-stars with Lake Bell and Kate Bosworth) key into the untapped pathos and humor of the tired premise, Black Rock becomes a refreshing action romp. More often than not, though, the film isn’t as engrossing or engaging, as it clearly wants to be. There’s a refreshing lack of exploitation in the proceedings, but all of the realism is expended on the dynamic between the three women and little left for creatively convincing us that these girls could hold their own against the experienced and aggressive soldiers that want them dead. The set-up is well handled, and Aselton proves a light touch when it comes to sketching out all the necessary geographical and emotional details; Bell and Aselton have long been feuding over a stolen boyfriend, Bosworth fakes cancer to get them on an outing to a place they loved in childhood, and one of the three war veterans (Iraq is the new Vietnam) knows them from high school. The acting on both sides of the genre line is sturdy, and Aselton in particular is quite good as Abby, both before and after the divisive event, that puts the girls in peril.

The incendiary moment here is also thoughtfully staged, with Abby luring one of the guys into the woods for a tryst that she re-thinks just as he’s moving in to seal the deal. When he presses her, she incapacitates him and soon all the girls are captured and the men deciding what to do with them. The delicacy of the early scenes gives way to a muted version of The Most Dangerous Game, and it’s the subversive comedy in Duplass’ script, as well as the actresses’ ability to deliver it straight, that gets us through these routine, less believable chapters. If only the directing and the writing were also used to add dimension to the men, who come off exactly like the crazed, shifty products of a political war the logline suggests. That they are both unstable mentally and incompetent professionally (the ladies would be dead ten minutes in if the guys have all the skills they claim) creates an imbalance in Black Rock that keeps it from being more than the violent ditty we expect. Horror fans, especially those who have tired of wanton misery in their action thrillers, might find this a reasonably good time at the movies. Those who know Aselton and Duplass from their other work, like The League, will be smarting from the wasted opportunity to inject wit and intelligence into material that direly needed it.

Black Rock is now available on VOD and in limited theatrical release.