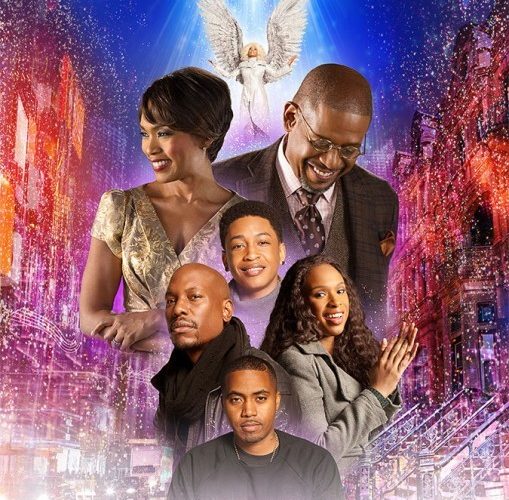 I admit I’m unfamiliar with Langston Hughes’ Black Nativity, a libretto that serves as the source material for Fox Searchlight’s latest release, but I have a feeling writer/director Kasi Lemmons has taken several liberties to translate the story into something more contemporary. The question the film’s hero Langston (Jacob Latimore) asks are downright chilling: did his birth divide his family?

Opening in Baltimore, Langston and single mother Naima (Jennifer Hudson) find themselves in foreclosure. Sent to live with his grandparents, Reverend Cornell Cobbs (Forest Whitaker) and Aretha (Angela Bassett), in Harlem, Langston finds himself thrown into a culturally confusing place. He’s starting to develop a street-smart kind of mentality, doing whatever to survive in a few moves that don’t entirely feel motivated throughout the story. The songs are a mixture of original and classics with nods to Langston Hughes, performed by top-tier talent including Hudson, Mary J. Blige (as an Angel), Nas (as a Street Prophet), with Grace Gibson and Luke James as “Mary” and “Joseph” (here, Maria and Jo-Jo). Lemmons’ portrait of contemporary Harlem isn’t without nods to Harlem’s past, although its current reality reflects the expansion of a community driven out by big chain stores. The film is less about the dynamics of location and more an internal study of Langston, played beautifully by Latimore.

Black Nativity is an exceptionally entertaining musical, especially effective in its heartbreaking first act as Langston departs from Baltimore, uncertain of what his mother is doing to survive. Naima has been laid off from her steady job working in city administration and has taken two jobs to make ends meet until she can no longer. Black Nativity’s star is the musical numbers, often inspired by the great thinkers of the Harlem Renaissance. If anything, I would have loved this movie to explore this legacy a bit more. Lemmons’ film moves rather rapidly, running a brisk 93 minutes, focused like Langston on the here and now. Its last act loses a little steam with the required revelations as Langston starts to go down a dark path and finds a form of salvation: if anything the ‘what happens next’ is missing, along with the ‘what happens before’ — Hughes’ Black Nativity is performed in the third act, leading to an extensive dream sequence.

Some devices don’t work as well as others, however Kasi Lemmons has made a film that lives and breathes, even if it at times it doesn’t work. A little lighter than Lemmons’ usual fare (including the masterpiece Eve’s Bayou, the socially conscious thriller The Caveman’s Valentine and the warm and wise Talk to Me), Black Nativity is lively, entertaining and inspiring — it’s not to be overlooked in a very crowded week at the multiplex.