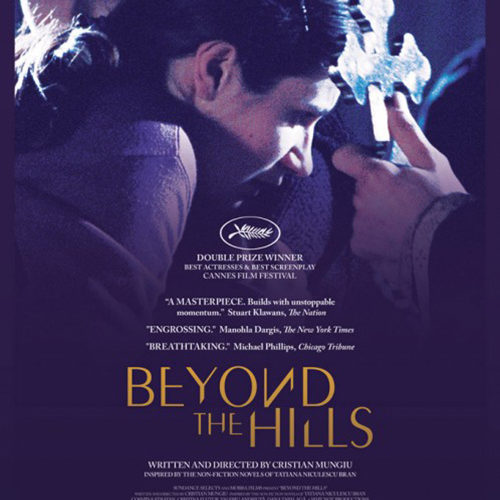 [Review] Beyond the Hills

It took Cristian Mungiu over five years to release a feature-length follow-up to his Palme d’Or winning masterpiece, 4 Months, 3 Weeks, and 2 Days. That film, along with The Death of Mr. Lazerescu before it, launched the Romanian New Wave to international acclaim and recognition, and although the movement is not quite as overtly political as it once was, Beyond the Hills is evidence that social responsibility is still among the top Mungiu’s list of priorities, but the intelligence and emotions of the characters are just as prevalent. Beyond the Hills establishes itself as a more humanistic counterpoint to the concentrated and agenda-driven politics of 4 Months, 3 Weeks and 2 Days; if that film is Mungiu’s Bicycle Thieves, then this one is his Umberto D.

Appropriately, Beyond the Hills bears a heavy resemblance to Italian neorealism, utilizing the long takes just as boldly, with many of Mungiu’s shots going on for several minutes. Mungiu did the same thing in 4 Months, but his tendency to leave the camera running well after a scene ended caused for a natural, awkward tension, a palpable discomfort among characters that had you riling up in your seat; it’s his aesthetic trademark, the trait that makes Mungiu’s direction wholly original and not just a masterful replication. He does the same thing, albeit less often, in Beyond the Hills, which takes place in an unspecified year and again follows two girls, except this time there is no goal for you to put your finger on. Voichita (Cosmina Stratan) and Alina (Cristina Flutur) are just friends, raised in an orphanage together until at some point Voichita became a nun and Alina stayed, deciding to visit her when the film begins. From there, Alina gets…sick? Possessed? Angry? She gets something, and it causes tension among the church family and turns the film into a religious drama and a dual-character study: It follows Alina in her unfocused attempts to make something of herself and cling to her only friend, but you never get the feeling that she might be turning religious. Voichita is her passive counterpart, taking in both what her friend and her church tells her, struggling internally while Alina struggles externally. One might call them two sides of the same coin, but it might be more accurate to call one of them the coin’s shiny surface and the other one the interior.

The film unfolds slowly — too slowly, some would argue — and is interrupted by outlandish bursts of passion. Sometimes that passion is quiet and the characters seem to miss it, as when Alina is making a checklist of all her sins. Other times that passion is fiery to the point of exorcism. It’s precisely this novelistic structure that provides Beyond the Hills with such nuance; we get the feeling at several points that maybe Voichita and Alina were or want to be lover — a scene in which the Father talks about “women marrying women” goes directly into Voichita rubbing body oil on Alina — but it dissuades as the pair find bigger fish to fry, and then it comes back, strangely, deliberately under-addressed, evidence of over-ambition maybe, but also the moral equalizer. We are observers, not jurors.

If not for that logic, Beyond the Hills would be just another in a series of overdone anti-clerical films or a poor imitator of “crazy nun” films like Black Narcissus or Viridiana. On initial viewing, one still might be inclined to side against the church; its members are single-minded and tend to compartmentalize their values in terribly unhelpful ways. Are the motivations always as simple as they seem, though? Come to think of it, the relationship between Alina and Voichita is rarely elaborated on, but there is an inconsistent, sometimes violently passive-aggressive interlude to the more friendly moments. It’s a relationship not unlike the one between Freddie Quells and Lancaster Dodd in The Master. Homosexuality colors the atmosphere, and somewhere in the confusing maelstrom of slow-moving character building are political implications, except the politics here reveal themselves slowly, questioning our understanding of a relationship while The Master gave us the war as an important detail and begged us to make our conclusions. Conclusions here are equally difficult. Who is worse, the indifferent party or the well-intended wrongdoers? That’s the big question that Beyond The Hills is asking, and for all the times religion is compartmentalized and misused, one can’t help but see where the Church is coming from. The hospital, after all, did not make much of an effort to keep Alina out of trouble when she is on her way out. As a result, small exchanges between doctor and nuns that resonate most. “God help anyone who falls into your hands,” a doctor says. “Excuse me, but the same goes for doctors,” retorts a nun. From what we have seen, they are both right. Similarly, when you hear that smoking is a sin in the films first third and then in the last third you see the cops smoking, the point isn’t whether or not it’s silly for smoking to be a sin you must confess for, that’s simply given; the point is that law enforcement is sinning, doing something wrong, when they step in, it is not just the church. Then the question becomes who is making the rules and whether the rules make any sense at all. Mungiu is forcing us to question law and customs on both levels. If Alina and Voichita are the same coin, interior and exterior, the religion and the law are two sides of a coin, and each repeated, close viewing of Beyond the Hills makes that more evident. In this broad, political world that gives us just a couple glimpses of the civilization that lies at the titular location, things are rarely as simple as they seem.

Above all, these traits make Beyond the Hills a journey that embodies the cliché of difference between journey and destination. When you reach the end, it’s shocking, but the final, brilliant closing shot is a giant opportunity for reflection. Why did things have to turn out the way they did? Answers are in the details of bureaucracy, religion, and character that we witness, our anchor is the brilliant performances of both leads. These actresses turn this epic political statement into an intimate character study, proving that customs alone cannot shape a free society. Beyond the Hills is about the role of the free individual and what should happen when love is introduced to them as much as it is about anything else. Some may call it too novelistic in pacing and scope, too obtuse in its numerous ambitions, but much like Paul Thomas Anderson’s The Master, which shares themes of broken psyche and love stories tormented by society, it is great evidence for a resurgence of a cinematic modernist movement. What Mungiu does even better than Anderson, however, is utilize images as counterpoint to its intelligent dialogue. Both films are filled with intelligent and provocative conversations, and while The Master was well shot, it relied on Jonny Greenwood’s score to materialize the fragmentation and confusion of its lead. Beyond the Hills forgoes a score entirely and lets its long takes and silence illuminate the same uncertainty. The result is obtuse and opaque in its subtext, but there are a slew of valid interpretations governing the film’s unshakable world.

Beyond the Hills hits limited release on March 8th and will arrive on VOD on March 14th.