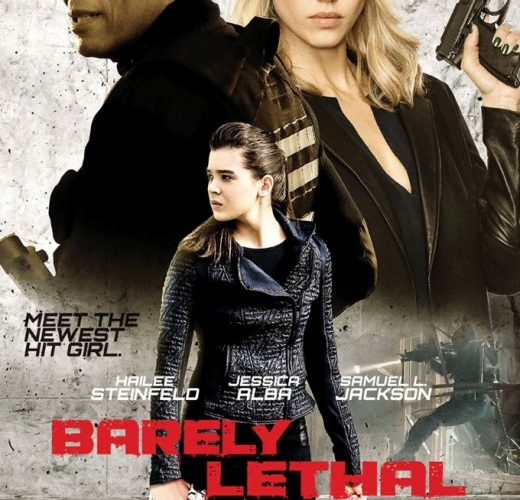 Much like director Kyle Newman‘s first theatrical release Fanboys, his sophomore effort Barely Lethal is built for a niche audience with minimal wiggle room to capture the excitement of casual viewers just stopping by. You don’t need to travel farther than the backlash-riddled comments section of its YouTube trailers to understand this. Snide remarks about its apparent quality, jokes about Samuel L. Jackson loving money, and easy comparisons to fare like Agent Cody Banks are the norm in today’s internet culture of anonymous hate and sarcasm for laughs whether the words spewed are honest or merely trolls passing time. Strip away the Mystery Science Theater 3000-filter where everyone’s a comedian and you’ll see the film advertising itself for what it is: a cute, over-the-top mash-up of high school romcom and spy game action meant to entertain via silliness. It does have problems: John D’Arco‘s script tries way too hard at times to be funny, wonky sound design has music blaring above dialogue in one scene before the characters change rooms and find absolute silence as though they’ve entered a vacuum, and some weak fight direction make scuffles look as disjointed and fake as the first season of Alias. The film could have gotten away with the latter two if it utilized them as part of the comedy rather than ill-advised markers that drama has arrived since cast and crew are at their best when having fun. Just look at Jessica Alba‘s villainous Victoria Knox, a character so tongue-in-cheek that it takes a moment to realize she isn’t the sore thumb. The whole would have been more enjoyable if everyone else followed her lead.

That’s not to say they perpetually don’t—I just wish its absurdity trumped its melodrama more consistently. Because the plot is absurd in the best way possible when you have a not-so-secret Prescott military prep school training orphans to be assassins from the age of eight. There are a couple hilarious moments with headmaster Hardman (Jackson) berating little girls because they didn’t recklessly drive fast enough or are about to cut the wrong wire during bomb defusing class. The usual soap opera catfight between valedictorian Agent 83 (Hailee Steinfeld) and salutatorian Agent 84 (Sophie Turner) therefore doesn’t stem from winning the star quarterback, it’s about wanting to be the first trainee activated for live combat. Whereas 84 shows signs of psychopathy early on, 83 isn’t quite so keen on the homicidal inevitability fieldwork provides. This is why she takes the opportunity to escape when it’s presented to her. After all, she’s already become well-versed in small town teenage living via mainlining films Bring It On and 10 Things I Hate About You while holed up in hotel rooms around the world during covert missions. Putting it into practice shouldn’t be too difficult, right? Well, the biggest laughs come from her fish out of water assimilation into the Larson family (Rachael Harris as Mom, Dove Cameron as Liz, and Jason Ian Drucker as Parker) because 83 (now exchange student Megan Walsh from Regina, Saskatchewan) can’t quite shake her analytical paranoia. The problem is her “facts” are born from Hollywood fiction. So when a table of girls invites her over for lunch, she can’t help analyze the situation as a potential Mean Girls reversal.

Suburban life becomes a steady stream of high school clichés skewed through a prism of espionage. Little Parker finds Megan’s high-tech weaponry to play with around the house, nice guy and lovelorn Roger (Thomas Mann) sets himself up as her first ever friend, and cool guy, teenage rock star Cash (Toby Sebastian) finds himself in her crosshairs as well as their creepily star-struck biology teacher Mr. Drumm (Dan Fogler). Laughs are had courtesy of loudmouth Gooch (Gabriel Basso), awkward brilliance is introduced via Roger’s astronomically out-of-touch father (Rob Huebel), and Harris’ usual acerbic wit remains underneath her motherly advice. But while Megan is obviously unlike everyone else and quickly made into a pariah everyone knows, it’s a viral video of her beating up some kids while dressed as the sports team’s mascot that has the world take note.

By world I of course mean Hardman and his Prescott cronies. Since Megan was his top agent, it’s hardly a shock he’d believe she turned double agent in her prolonged absence. And with Knox on the loose, he can’t take any chances. What this means is that the final third of the film officially bridges the spy action of the first with the adolescent drama of the middle to deliver a resolution steeped in both. The delineations are more rigid than you’d like, but the stilted plot progression should be easily forgiven since no one is entering Barely Lethal expecting screenplay genius. D’Arco sets his story up to possess the same contrived allegiance revelations all secret agent thrillers use. He makes it serviceable and ultimately leaves it at the mercy of Newman and his cast’s execution.

They succeed, mostly. Basso is an unbridled hoot, Autumn Dial and Kathrine Herzer‘s “mean girls” are humorously vicious, Sebastian’s the epitome of self-centered tool, and Mann provides puppy dog sweetness you know cannot finish last. Alba hams it up spectacularly, Jackson’s having fun with the juxtaposition of his usual rough-edged persona opposite grade school girls, and Turner does well at stone-faced killer to mirror Steinfeld’s thawed heart. That first grouping is vastly different than the second, lazily overlapping in a victim/predator dynamic minus Turner also working to dismantle her rival’s newfound social life out of spite. It’s therefore Steinfeld’s duty to carry both worlds (Cameron helps nicely after her Liz evolves mid-way through) and keep both halves equally interesting. Generally typecast for stoic badassery, Steinfeld unexpectedly proves a welcome bright spot of bubbly optimism to propel the fun.