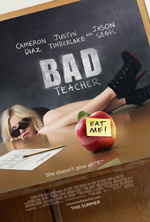 I wasn’t the biggest fan when it was called Bad Santa and took place in a department store, so, suffice it to say, Bad Teacher’s foul-mouthed comedy never quite hit home. Scribed by writers from “The Office” and, what is sadly much lower on my anticipation list now, Ghostbusters III, Gene Stupnitsky and Lee Eisenberg have one thing going for them—laughs. If it weren’t for a healthy amount of laugh-out-loud instances, the void of any engaging conflict coupled with the broadest performances I’ve seen in quite some time, this film would be an inexcusable failure. Even the romance, the one thing that may be construed as a coherent plot progression, is completely tossed to the side for off-hand comments that made even me blush in surprise. And that, my friends, is a hard thing to do. But despite the necessity to give credit where credit is due, nothing can overcome the simple fact Jake Kasdan has once again bored me from an overwhelming sense of tedium—see Walk Hard. The space between comedic gems is uninteresting and I may have ended up hating myself a little bit for having the tiny bit of fun I did.

Elizabeth Halsey is not a role model and if the filmmakers did anything right—all the way through to the final frame—it’s to never pander low enough to make her one. Sure, this vain, materialistic, witch of a woman gets lucky every once in a while, but it isn’t because some major epiphany changed her. Halsey is and always will be a woman out to coast through life and do as little as humanly possible to survive. Whether it search for a sugar daddy to spoil her with an infinite checkbook or a long line of passive coworkers who will do her job when she refuses, no one is a better manipulator. She’ll use her body, her feminine wiles, and the stupidity of others to reach her goals and she’ll never face the consequences because, frankly, the ‘pretty girls’ never do. This is the message being fed to us—Bad Teacher isn’t about a lazy, corrupt educator, it’s about the popular girl working in a world that simply can’t compete. This is middle school for grown-ups, right down to the fake, jokey acting ticks utilized by almost the entire cast. It’s as though Kasdan told his actors to channel their inner 12-year old and never look back.

These characters are as annoying as nails on a chalkboard. Had the writers changed the subject from teachers to students while retaining the language and lewd behavior, I could see myself getting behind it. Instead we have to watch Lucy Punch and Justin Timberlake, for all intents and purposes, use baby speak. You cannot go broader than these two; it’s literally impossible. Here I came into the film hoping to see a couple really wonderful supporting players do their thing and all I got were hammy line readings, goofy facial expressions, and an infantile sensibility. Having their Amy Squirrel and Scott Delacorte consistently be used and abused by Cameron Diaz’s Halsey is a forgone conclusion because they exist in an alternate universe of lollipops and cotton candy, a sparkle in the eye and glint of a smile causing us to wonder where the ‘Awe shucks’ with arm thrust are—although Punch’s ‘shut the front door’s’ are an adequate substitute. No matter how vicious or vile Diaz gets, you can’t help but root for her because to have the others win means living in a world run by imbeciles. And that is why Russell Gettis is my hero. Jason Segel’s nonchalant gym teacher is the ultimate foil to a world of dolphins, kisses on the forehead, and dry-humping. Here is a guy that not only is thinking exactly what I am while watching these pod people talk, but actually rolls his eyes and trolls them for their trouble. He is a natural with sarcasm and his performance is made even better because those around him feign cluelessness with every close-up. Unafraid to yell at a sixth grader to drive home the point Lebron James has no championship rings or to point blank ask another teacher for her panties, his Gettis is this film’s savior—well him and the dumbfounded, open-mouthed little boy seen numerous times in reaction shots. He is the one bit of reality we are allowed in this “Twilight Zone” of a school populated with the same archetypes as the kids they teach. Between the over-achiever (Punch), the valedictorian (John Michael Higgins’ Principal Wally Snur), the suavely brainless new kid (Timberlake), and the identity-less follower (Phyllis Smith’s Lynn Davies), the ‘joke’ goes from cute to loathsome.

It’s shame the plot is so lazy, because such a mirroring of the education structure could have been an intriguing social satire instead of the mindless vehicle for laughs given. I think Diaz is better than Billy Bob Thornton was in Bad Santa, but that may only be because she has more to work with comedically being an attractive woman and not a surly, craggy drunk—even though I often argue she is. I don’t ever care what happens to her, but that doesn’t mean I can’t stick around to see what bigoted or racist remark may slip out next. Will she find the money for her boob job; get the rich kid away from the goodie-too-shoes who has him; get fired for swearing at her children, showing movies in every class, drinking at school, and cheating on standardized tests? Maybe, maybe not, who cares? As long as Segel moseys into the background, mocks the other characters silently, and then engages in dialogue with her to expose the artifice of their surroundings, I’m fine to sit back and enjoy what I can. Gold stars to the forehead like a Buckeye, reciprocal dodgeball smacks as reward/punishment, and Eric Stonestreet trying to shake “Modern Family” to be a hardass? They were enough to keep me in my seat.