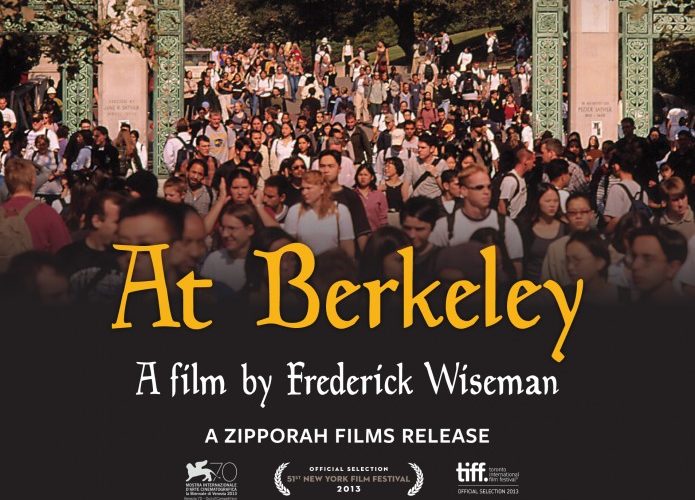 “Question those who offer you simple solutions to big and complex problems,” advises one student speaking to his peers at a protest. Throughout At Berkeley, director Frederick Wiseman refuses to show his sympathies or to craft his own point of view, but it is safe to assume that he would agree with those words of wisdom. The first couple of hours of At Berkeley almost feel like a series of standalone, fly-on-the-wall moments, taking us to different classrooms or board meetings for just a few minutes each, never drawing overt connections between them. But as these scenes accumulate, and as board meetings maintain a consistent focus on economics — financial aid, layoffs, tenure, faculty salaries — they begin to paint a multifaceted portrait of education in America, and the film reveals its recursive structure. Everything slowly comes together, and we have finally been shown the importance of education instead of just being told, time and time again, that our future depends on it.

So it might take several scenes, maybe even a couple hours, for At Berkeley to move from “interesting” and perhaps even “essential,” but all the same, it’s a transition that is difficult to miss. Its four hours are beautifully paced, with the most interesting scenes — notably an early conversation about access, a seminar on Henry David Thoreau’s Walden, financial aid grievances, a lecture on self-evaluation / self-improvement, and a discussion on what it means to be an African-American at a mostly white college — coming in consistent intervals and with a gradual acceleration that avoids stale moments almost entirely (though your mileage may vary depending on your interest is supernovae, Walden, and insects, among other things). At Berkeley doesn’t have the clearly defined structure, lengthy scenes, beautiful set pieces, or elegant camerawork that would typically signal “long film.” Instead, it gives you puzzle pieces and continually asks one to assemble, only to reveal, at the perfect moment, that there are more pieces still coming. Those pieces are largely financial in nature, as the first segment informs us that only 16% of UC-Berkeley’s budget is being covered by the government, down from 25% just a couple of years prior and from 50% much further back. As such, the middle class, too rich for financial aid but too poor to pay increasing costs (plus the exorbitant fees), are experiencing difficulties. Wiseman lingers on no potential solutions and offers none of his own — this is a complex issue, there are no simple solutions — but that an annoyed student and Chancellor Birgeneau offer similar suggestions entirely independently (and that protesters focus on one issue at a time instead of making a laundry list of demands) suggests a potential starting point. The first step in repairing a malfunctioning machine is to identify the broken cogs, then fix or replace them one at a time.

If At Berkeley is a hopeful movie, even after a final hour that focuses heavily on protests and administrative response to protests, that hope comes from the eloquence and intelligence of the students, who willingly offer thoughtful contributions on a variety of topics without a minimum of prompting. If there is anyone who is going to spot and fix the broken cog, Wiseman’s non-interventionist approach suggests repeatedly that there is a good chance he or she is at fine institutions just like the one depicted. On the other hand, two professors give lectures that are implicitly critical of administration, one in which a professor — whose cancer research was dismissed before eventually being proven right — advises students, “don’t listen to your professors or your textbooks.” Another professor goes into detail about the importance of administrations to be critical of themselves and of their coworkers. If these moments were frequent enough, or if Wiseman’s camera was a little more active, we could accuse him of taking sides — something that almost certainly happens when a speaker blames many university shortcomings on Republicans in office — but four hours in which nobody even seems to acknowledge the camera makes these personal interpretations more than directorial statements.

At Berkeley is all the better for that, though. No line is inconsequential, but an hour, maybe even two hours later, they recur, or their full weight becomes noticeable. That isn’t the editing of somebody who wants to throw blame or shove accusations down our throat, but of a thoughtful person concerned with how seemingly unrelated events, apart in both distance and time, can all be connected to the same action or circumstance.

In light of recent events, namely the Occupy movement and particularly Birgeneau’s poor handling of it that led to many calling for his resignation (he did, although he cited his desire to be a “regular professor”) a year after filming took place, it’s tempting to view At Berkeley as a character study of a man who is incapable of dealing with the reality of a difficult environment. His meetings display a group of administrators hopelessly out of touch with the concerns of the students that intercut his segments, viewing them not as individuals but as a collective body. Birgeneau regularly cites that the school is at an all-time high of low-income students per capita, but perhaps he sees it more as a statistic to brag about than anything else. Still, Wiseman refuses to identify this man (and all others) or to invoke Occupy by means of voiceover or explanatory text at any point. The far more likely possibility is that he is displaying two fundamentally different experiences that become irreconcilable when the system breaks.

In a nutshell, this is the story of modern education — increased cost, decreased student aid, and “public” universities becoming increasingly private due to lack of funding. What’s remarkable is how it never becomes reductive. The pessimists along us might not learn anything new, and Wiseman’s heavily restrained approach is not impressive so much as it is effective at painting this particular picture, but anybody who brushes off At Berkeley wondering why we couldn’t get along or why we can’t just make things the way they used to be was not paying attention. Your political stance and your proximity to the subjects might drastically influence your interpretation of At Berkeley, but it’s difficult to say that this isn’t exactly the picture Wiseman wanted to make, flaws and all.