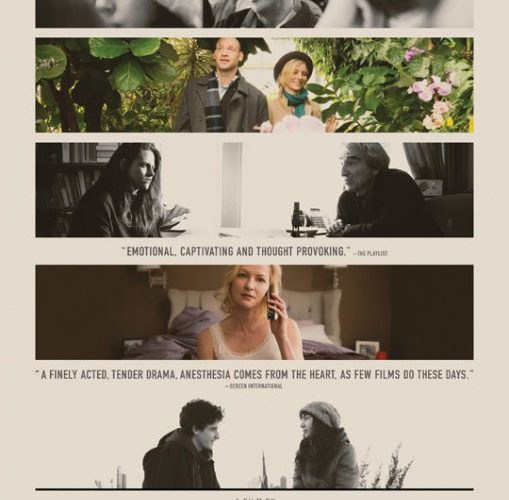 A retiring Philosophy professor (Sam Waterston) buzzes up to a stranger’s apartment one night, screaming for help. The tenant (Cory Stoll) rushes downstairs, and finds two men, bloody and beaten on the doorstep. One is the ailing professor, and the other, we cannot see. The narrative then flashes back several days to show us how these characters came to meet this gruesome fate. Anesthesia offers an intriguing but familiar set up, which splays the story out into numerous sprawling strands. The film is Altmanesque in its conceptualization, as the lives of roughly a dozen strangers crisscross and interlock in unexpected ways.

Writer-director Tim Blake Nelson, best known as Delmar from O Brother, Where Art Thou?, rounded up a stellar and committed cast, including Glenn Close, Michael K. Williams and Kristen Stewart. The filmmaker seems at home collaborating with actors of this caliber, having directed Edward Norton to not one, but two top-notch performances in his previous directorial effort, Leaves of Grass. He’s a fine actor, whose career as a filmmaker has received acclaim for such works as The Grey Zone and Eye of God. In 2001, Nelson directed O, a retelling of Shakespeare’s Othello set in a high school, which builds to a Columbine-esque shooting. As a filmmaker, he’s never shied away from touchy, culturally relevant subject matter, and Anesthesia is no exception. While the film is competently staged and photographed, several elements of the screenplay falter with near fatal flaws which reverberate through the entire picture. Often, Nelson’s characters speak as if they’re reading aloud from a philosophy essay, conveniently unaware of their own shortcomings until they realize the error of their ways precisely when required by the plot. The biggest offender is Sarah (Gretchen Mol) an upper-class suburban helicopter parent whose problematic drinking is embarrassingly pointed out by her bratty daughters. The plot strand’s resolution comes immediately, without hassle, an unlikely conclusion which stands out from the rest of the ensemble like a red wine stain.

The tone is overly sincere and heavy, but the screenplay adeptly weaves its characters and narratives around the film’s central theme with painstaking precision. Thankfully, we never feel lost in the kaleidoscopic narrative, each character anchored to the ground despite their limited screen time. Nelson’s canny ability to maintain each character’s narrative thread saves the pace from becoming totally inert and tiresome.

The film’s narrative revolves around the notion of sedation, the various ways in which we choose to numb ourselves to the daily toils of the outside world; legal or illegal; moral or immoral; chemical or natural. Occasionally, it feels like Nelson is hitting us over the head, in particular, the film’s closing line may evoke some rolled eyes from audiences.

The results of Nelson’s multi-layered narrative feel shallow and abrupt. Similarly structured films like Short Cuts, Magnolia or Traffic succeed at a running time of nearly three hours a piece, thanks to their richly nuanced screenplays. If you have twelve protagonists with substantial speaking roles, it’s not surprising that the running time may well exceed two hours. Even the most subtle, economic piece of character development requires time and patience. This type of narrative demands breathing room and a measured pace, as the aforementioned films also evoke a down-to-earth feel of real life, a subject which rarely moves like structured screenwriting.

On the other hand, Anesthesia clocks in at a brief 90 minutes, half the running time of those superior films. Not to say that long movies are any better than short ones, but in Anesthesia, this issue is far more pronounced, as we barely have time to get to know these people. There were undoubtedly moments when one is engaged by the characters, but the brisk pace burdens the narrative with a rather short attention span, always cutting away to the next plot thread just when things become interesting.

A character may come to a life changing realization in one scene, only to effortlessly implement those changes in the next. It’s a movie, so we need crisis and conflict, but we also apparently require neat resolutions. It’s a risk taken by limiting the time frame in which the story takes place to a few short days. As a result, the characters of Anesthesia have the most eventful and dramatic week of their lives. On a screenwriting level, that almost makes sense. Most movies are indeed about the most extreme moments of their protagonist’s life. But there’s a fine line between believably life-changing events, and over the top narrative clutter. The dialogue often feels contrived and self conscious, as if crafted and refined to the point of sounding stagy and improbable. His cast acquits themselves admirably with unfortunately paint-the-numbers material, but our engagement with the film rarely exceeds casual interest.

In its best moments, the film feels like an engrossing collection of contemporary short stories. The streets of New York City marvelously play themselves in the film, a perfect setting for people who would never normally interact with one another to collide. You can tell it wasn’t shot in Toronto, a poor substitute for the real thing, as the authenticity of the littlest details of the city’s landscape support the interwoven narrative and themes. In its worst moments, it feels like a message-laden after-school special. There is not a single scene which cannot be directly compared to a similar one from some cheesy made-for-TV movie. We’ve seen all of this before, which forces the film’s plot into the realm of cliche and triteness.

The life of an addict, as seen in cinema, may seem cliched on the surface because the territory has been well-tread by so many films, good and bad. If you tell us that a person is a drug addict, we won’t sympathize with him or her simply by default. We need to get to know them, learn a little bit about who they are, and how they ended up here. The devil is in the details (another cliche) and thus, the more specifically we understand the person, the more likely we are to sympathize. The film attempts this, but remains so unfocused that its characters are relegated to supporting players in their own stories.

The most successfully conveyed character in the film is Joe, a recovering heroin addict, played by K. Todd Freeman, whose predicament is depicted in painful detail. As played out in the film, we buy Joe’s sadly believable narrative, as Freeman imbues the man with an angry snarl, lashing out at an indifferent and seemingly uncaring world. He’s the lone character in a sea of caricatures, who speaks like a real person struggling with his new-found sobriety. Yet, a subplot involving Joe’s brother (Williams) and a broken promise feels as rushed as any plot development in the film. Why not sit with that moment for a beat? It’s as if Nelson has no time for this heartfelt scene, as he already has another tear-jerker on deck in the next.

The film’s climax, which I will not divulge, is emotionally effective, despite some aforementioned missteps along the road. In the end, the cast elevates their plights to the level of genuine tragedy, even if it’s only momentarily. It’s miraculous that after such a wonky set up, we find ourselves with a steadily crafted climax. These emotions are however fleeting — as the lawnmower engine within the plot roars back into gear, we’re left with a puzzling and uneven tonal mess. Anesthesia is a film with the best and most noble of intentions at heart. Unfortunately, the film observes nothing profound about addiction that cannot be found in worthier sources, and conveys as much in an underwhelming and forgettable fashion.

Anesthesia enters theaters and on demand on Friday, January 8th.