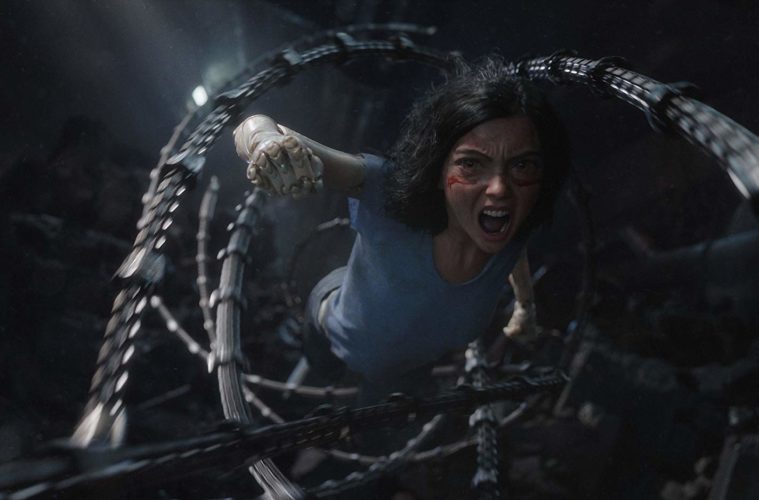 Review: ‘Alita: Battle Angel’ is an Impressive Spectacle Beset by a Tedious Narrative

Eyes might be the windows to the soul, but in technical filmic terms, they are a dead giveaway for the macro failures of a visual effects team. CGI and motion-capture technology have made tremendous strides in the past decade, and yet if a character’s eyes reside in the Uncanny Valley—a mythical place where technology engenders alienation in the hearts of the masses by simultaneously foregrounding artificiality and realism—it still creates an unwelcome distance between audience and text. Sure enough, when 20th Century Fox released its first trailer for Alita: Battle Angel, Alita’s enormous, wet computer-generated eyes garnered the most attention. The eyes’ photorealism, or their attempt at such, was a divisive point. Either they took you out of Alita or they drew you in immediately.

Alita lives and dies by its eponymous creation, and to the credit of director Robert Rodriguez, producers James Cameron and Jon Landau, and the visual effects house Weta Digital, the character represents an impressive technical feat. More so than the Na’vi in Avatar, which always had extraterrestrial origins as an out for any inhuman qualities, Alita’s humanoid nature requires a certain 1:1 realism, a sustained suspension of any and all disbelief. Alita’s eyes might be affectedly large in a manga sort of way, but they persuasively project a young person’s earnestness and vulnerability, which is no easy feat. Rosa Salazar’s motion-capture performance follows suit: it’s broadly expressive befitting the material, yet she never sacrifices her character’s raw, adolescent emotional core. Weta Digital captured Salazar on location, and the fluidity of her movements against the insular backdrop of Rodriguez’s Troublemaker Studios in Austin, Texas creates a playground-like feeling in Alita, as if everyone involved was bringing their make-believe fantasies come to life.

That loose sense of freedom instills some necessary awe in an otherwise self-consciously serious project that muddles through a tedious origin story. Inspired by the first four volumes of Yukito Kushiro’s manga series under a similar name, Alita introduces the cyborg at its center, the settings of Iron City and the affluent sky city of Zalem, and the brutal sport of Motorball, which is kind of like if jai alai was crossed with speed skating. While many friendly faces and violent killers populate Iron City, Rodriguez primarily focuses on three figures in Alita’s life: Dr. Dyson Ido (Christoph Waltz), a scientist-physician by day, bounty hunter by night, and surrogate father for Alita; Vector (Mahershala Ali), a shady entrepreneur who relies on stolen cyborg parts and rigged Motorball matches to maintain his influence; and Hugo (Keean Johnson), Alita’s lame love interest who, despite his aspirations of moving to Zalem and the secret double life he leads, is more haircut than person.

Though James Cameron’s focus still lies with his Avatar franchise, his fingerprints are all over Alita—the layered cyberpunk world, the hero story combined with the class-driven foundational mythology, and the endless potential for VFX innovation all fall squarely within the director’s interests. When watching Alita, one gets the feeling that the film resembles a sketchy, Cliffs Notes-version of the original vision. Many scenes feel rushed, like there’s internal pressure to keep the action moving or otherwise risk boredom, and the dense lore seems suspiciously compressed into its most accessible parts. Rodriguez’s contributions to Alita are self-evident—not just Salazar’s casting, but also the majority of the film’s fight scenes, whose clear rhythmic coherence feel like a product of an action filmmaker weaned on small budgets and working in the third decade of his professional career. Yet, Cameron’s absence itself almost becomes a specter that haunts Alita, a gnawing sense that his undoubtedly longer, and more technically complicated version would have sewn up the seams in the design.

Still, Alita sports some good sequences here and there (a well-choreographed bar fight, complete with some much-needed levity, and all of the Motorball scenes are potentially worth the price of the IMAX ticket), but as with many VFX-forward films, the narrative eventually becomes a liability. It’s not just that the narrative falls squarely within a tired YA template, it’s also the delayed central conflict rendered vague until absolutely necessary, the unconvincing love story that absorbs much of the last act, and the sequel table-setting the script eventually has to accomplish. Alita works as spectacle, but there’s so much conspiring against that endgame that its best moments hardly feel worth it.