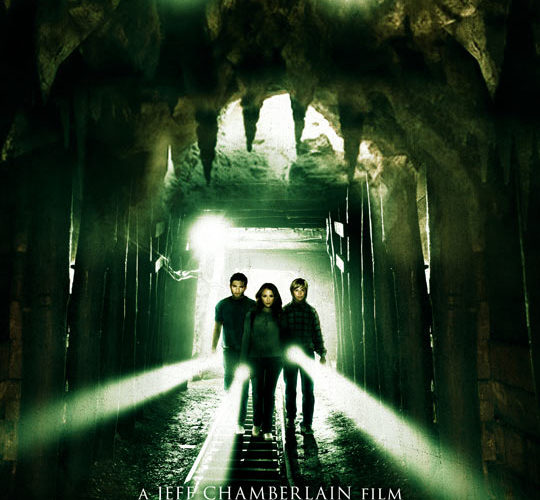 Actor-turned-director Jeff Chamberlain’s Abandoned Mine is harmless enough, which is a major letdown considering this is a horror/thriller. The premise is simple, so much so I wish Billy Mayss would appear on screen to assure us, “but wait, there’s more!” This is a little bit of a spoiler alert, but what happens we’ve seen many times before.

Five friends of multiple archetypes including high school jocks, hot girls, and an Indian outcast along for the ride, take shelter in an abandoned mine. What starts as a Halloween prank, which includes editing the footage for later, as they’re all wired with video helmets, turns deadly and ever so slightly scary. The characters, including the film’s biggest star Alexa Vega, are simply dull and unforgettable. The story doesn’t just send them into the mine; it contains some character building with a witty line or two, but nothing to that can truly keep on invested. The story incorporates found footage elements from the POV helmet cameras, but often relies upon otherwise classically composed shots. Opening with the mythology of about this particular mine, we learn the Jarvis family (including two little girls) were buried alive under mysterious circumstances. Apparently exploring haunted mines is a pastime of the youth of this small town, as Laurie (Saige Thompson) objects once she learns they’re going to the Jarvis mine. A rainstorm hits and they take refuge inside the cave.

Of the characters in the ensemble, only Ethan (played by Charan Prabhakar) leaves a lasting impression, a middle class Indian kid who has transferred to this small town after a stint in customer service for US corporations in India. The others leave minimal impact, including a minor love triangle between Sharon (Vega), the jock Brad (Reiley McClendon) and Laurie. There’s also the clueless hefty Jimmy (Adam Hendershott) who makes casually racist comments, but he’s an awful lot like the cubby kid from another Texas football movie Varsity Blues.

Playing on VOD, where much scarier movies are bound to be waiting for you (and without the MPAA enforcement you might find at a multiplex), you could do better. The film is not without its moments, but it delivers what is to be expected: some minor PG-13 horror thrills with the minimum amount of blood and terror.

Abandoned Mine is currently on VOD and in theaters.