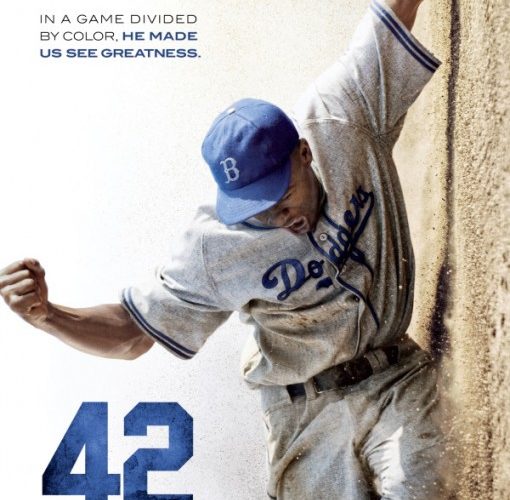 Much like the origin of forty-two as Douglas Adams’ “Answer to the Ultimate Question of Life, the Universe, and Everything” being nothing more than a joke—an ordinary, smallish number he chose—the fact Brooklyn Dodgers first-baseman Jackie Robinson wore it on his back simply derives from it being stitched on the jersey he was given. Baseball is a numbers driven game with statistics at the forefront of how players are drafted and utilized on the field and writer/director Brian Helgeland’s 42 follows suit with its timelines, batting averages, and percentages. But when it all comes down to it, the number is meaningless without the man indelibly associated to it. Forty-two was given without fanfare; it was Robinson who made it the mark of a hero overflowing with political and emotional resonance. He made it extraordinary.

Jackie Robinson (Chadwick Boseman) not only changed the face of baseball, but of our country as well. Thrown into the circus of journalists, racists, and outdated philosophy, he was a man alone amidst a sea of hatred, ignorance, and fear. Unable to fight back and risk destroying his and every other black American’s dream of proving themselves just as human as the rest, Jackie stood tall against adversity to win hearts and minds through his play on the field. A catalyst for change, his courage and fortitude helps him to represent an entire race by carrying them on his shoulders. With every home run, stolen base, and RBI he entrenched himself into an American consciousness more inclined to label athletes heroes than those back from the war.

This is what Helgeland sets up with his expository history lesson in and around 1945. World War II is over—won by the help of an African American population still treated as second class citizens or worse upon their return. It’s a time where men and women quickly dismiss honor as an aberration in black society; where a coach (Brett Cullen’s Montreal Royals bench boss Clay Hopper) could watch a man make play after play appear effortless and say, “Don’t get carried away, that’s still just a nigger out there” without a shred of humanity. Teammates draft strike petitions to not be forced into playing with Robinson, executives threaten not to field a team if he comes to town, and opposing managers spew racial epithets from the dugout praying he’ll finally snap. It’s a warzone—a new Civil War fought through sport—starting as just two against the country until increasing victories overcome the public’s horrific terrorizing to instill a sense of sympathy, empathy, and understanding. While Robinson is the man literally risking his life on the field every game, his story isn’t complete without a look at Dodgers President and GM Branch Rickey (Harrison Ford). This is the innovator who said to hell with baseball’s unwritten code and to hell with America’s archaic insight into the concepts of life, liberty, and the pursuit of happiness. He’s the one who picked Jackie from a pile of Negro League players and approached him about being the man willing to do whatever necessary to break barriers once and for all.

42 portrays this extraordinary true-life account of a powerful moment in our country’s history and does so without censor. Heck, Alan Tudyk’s Phillies’ manager Ben Chapman may say the N-word more than everyone in Django Unchained combined. But no matter how many emotionally strong moments like Boseman screaming in frustration as he smashes his bat after turning the other cheek or Ford perpetually refusing to back down from his moral and professional stand, it’s still an uplifting sports film with little chance of overcoming its genre’s clichés. Depictions of racist backtracking, moment of clarity epiphanies, and angry men yelling how they’d put an elephant on the field instead of their brother if it meant a victory run rampant in a dance of redundancy more theatrical than authentic and dripping with heavy-handed morality lessons.

While the actions of men like Pee Wee Reese (Lucas Black), Eddie Stanky (Jesse Luken), Ralph Branca (Hamish Linklater), and Kirby Higbe (Brad Beyer)—whether good or bad—are probably rooted in reality if not perfect depictions of it, they come across forced and obvious in this montage of seminal moments towards an unlikely pennant race. This is the inherent problem with biographies and especially ones involving sports with an inevitable thaw of a team learning to put differences aside to join as a family reaching for a common goal. Helgeland seems to want his film to be both a worthy account of the man and the politics but its orchestration finds difficulty reconciling the two as cinematic grandeur takes a backseat to a checklist of “necessary” stops paving the way.

With a high production value, wonderful late-40s aesthetic, and great background details like John C. McGinley’s Red Barber heard throughout, 42 does its subject justice. Christopher Meloni, Nicole Beharie, and Andre Holland lend support; Tudyk provides a villainous representation of America’s segregationists; and the baseball is fun even if mainly Robinson ducking pitches. And while the result languishes in the purgatory of well-crafted by-the-numbers biopics, I do have to single out Boseman for trying his very best to push it beyond. Credit the filmmakers for giving this television actor a shot at embodying a legend because he has the physique, tempestuousness, humor, and determination to pull it off. Boseman brings number forty-two to life, helping us remember—and teaching those too young to know—exactly what he did for America.