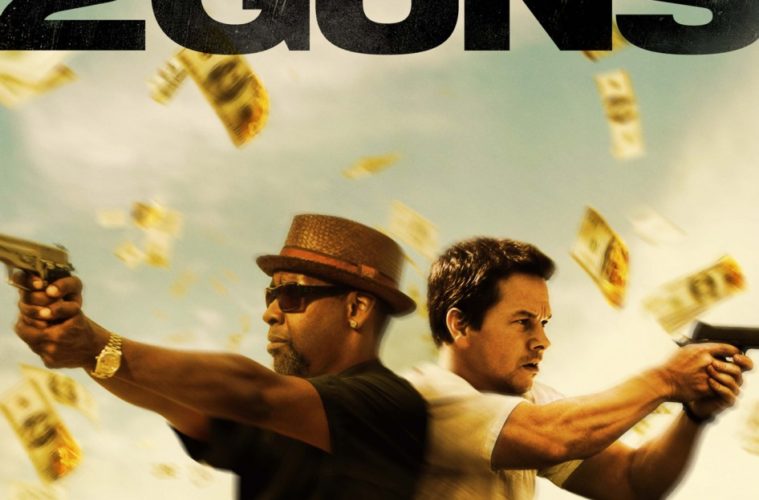 What do you get when you throw forty-three million dollars at an unsuspecting bank-robbing duo comprised of a DEA agent and a Naval Intelligence Officer, both believing the other is a criminal they can use as a fall guy on their respective missions? A pretty fun time. With a poster depicting Denzel Washington’s Bobby and Mark Wahlberg’s Stig back-to-back with drawn guns and money raining down, it’s easy to write the whole thing off as a lame duck unworthy of your time. I know, because I nearly did. But while you may think Denzel ill-suited for an action comedy or Wahlberg notoriously miscast in the type of serious roles Washington usually chooses, pairing them together gives 2 Guns the best of both worlds in a highly entertaining manner. Adapted by television producer/developer Blake Masters from Steven Grant’s graphic novel series and directed by Icelander Baltasar Kormákur, the film gives us a taste of the tone right from the start. Bobby and Stig roll up on a diner with the former heading across the street to a sleepy little bank and the latter to a booth to sit down for breakfast. They both use their charm to feign a sense of security with their respective marks and eventually rendezvous at the diner while bickering about what kind of toast they enjoy and whether it’s worth getting eggs with their hash. It’s the perfect pairing of Denzel’s straight man incredulity and Wahlberg’s easy smile and sarcastic barbs—calm and collected professional opposite his brash, mouth-running partner with a crack shot and gratingly loveable personality.

The shtick plays throughout, even when down in Mexico with Papi Greco’s (Edward James Olmos) cartel boys armed to the gills and one decapitated head already shoved into a bowling bag. They are the brains and the muscle respectively, filling their roles so the other never suspects their true motivations. But we see their fake game on the surface—two guys looking to take down a drug kingpin by robbing a bank and proving the money he houses there is dirty—is only the tip of a very slippery iceberg. Bobby wants Greco’s head for his bosses (Paula Patton’s Debbie and Robert John Burke’s Jessup) while Stig is looking to add the spoils to the Navy’s fund for his commanding officer (James Marsden’s Quince). Unfortunately for both, good intentions are a great way to get killed. 2 Guns is ultimately a buddy cop flick with its two burned agents being forced together to not only take out the people who set them up to steal a CIA slush fund—a deed Bill Paxton’s sadistic Earl is none too happy about—but also to clear their names of the trumped up blackmailed charges lodged against them. The DEA, Navy, CIA, and Mexican cartel all want their heads and neither knows who to trust besides the potentially life-threatening idea of believing the other can fit the bill. It isn’t an easy alliance and there are definite growing pains as they discover exactly where the other one is coming from, but in the end there’s simply no one else willing to help with the chaos surrounding the robbery being too much to handle.

It’s a plot with which you’ll be enjoying a couple car chases, gunfights, and explosive decoys in order to keep heads firmly attached to shoulders, but such things being effective in a summer popcorn movie kind of way actually took a backseat to the comedy for me. I like my Wahlberg goofy and against type like in I Heart Huckabees or The Other Guys because he allows himself the freedom to let his charisma carry him rather than acting ticks. While a bit awkward in those films due to playing the comedy broader, however, he really came into his own earlier this year in Pain & Gain. I think a lot of that authenticity spills over here because the same natural demeanor that renders his humor unavoidably contagious is present in both. This success isn’t Wahlberg’s alone, though, as Washington provides the perfect dramatic foil to temper his more by-the-seat-of-his-pants actions. We see the wheels turn in Bobby’s head as he pieces together the puzzle he’s an unwitting participant in, maneuvering each facet into place until he can make his move. One is unpredictable brawn and the other calculating patience—a match of two clichéd stereotypes made in heaven that generally works like a well-oiled machine if handled correctly. They learn a little something from the other along the way too while having a ton of fun in process—their infectious smiles and visual cues proving there’s just as much chemistry off camera as on. It’s a bumpy ride towards transparent understanding for the characters, but their partnership was always more than a con game from the start.

Pair their back and forth with a hilarious cast of periphery players and 2 Guns pretty much has everything you’d want from a summer action comedy. Olmos goes a tad overboard with his drug kingpin, but it works in the broad paint stroked canvas of the film. Marsden is surprisingly serious in his Naval duties despite an obvious penchant for goofball theatrics throughout his career and Paxton chews scenery like he’s wont to do. Some of the film’s best moments are when Denzel or Wahlberg are opposite Paxton’s Earl, completely unfazed by his power-hungry, fear-inducing confidence. It’s a central dynamic with a carefully measured mixture of comedy and drama that never bores or disappoints. As such, neither does the film because Kormákur and Masters know exactly what they’ve made and thankfully never pretend otherwise.