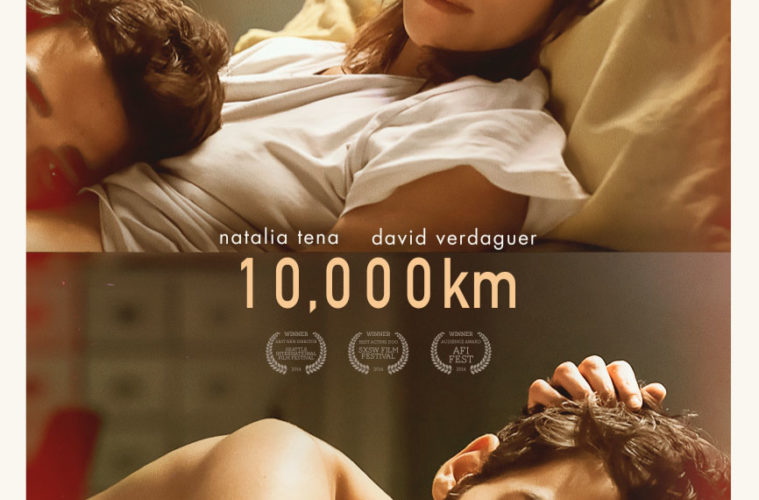 “All you need for a movie is a gun and a girl,” Jean-Luc Godard once said during the French New Wave. It’s safe to say that 10,000 KM director Carlos Marques-Marcet understands that sentiment — only in this case he needed a laptop and a girl. (That girl’s ridiculously charming partner doesn’t hurt the equation either).

10,000 KM doesn’t waste any time cutting to the chase, opening up with a lengthy and provocative sex scene that is as intimate as the day is long. Our story’s only two characters, Alex (Natalia Tena) and Sergi (David Verdaguer), it turns out, are trying to get pregnant. However, just as soon as the two manage to zip up their pants, Alex reads an email stating that she has received the opportunity to take on an artist’s residency in Los Angeles. After a brief, but well-played lover’s quarrel, Alex of course decides to take the residency while Sergi decides to stay behind in Spain. Bye bye, baby; hello, Los Angeles.

This is when the film really takes off. Somewhat reminiscent of a docu-fiction, Marques-Marcet pulls out all of the tricks to hand you symbolic gestures on a platter. Alex finds herself in a barren, white studio (with only Ikea furniture, might I add) in sunny California while Sergi remains in Spain, surrounded by fixtures that hide in the shadows while screaming inklings of home, identity, and history. And naturally, whenever the two characters video chat with each other, it is always day on one side of the world and night on the other. As if the physical spaces aren’t black and white enough, the use of different image forms lends its hand to the game as well. While the majority of the film takes on a clear, video aesthetic, the moment the two lovers begin talking via the computer everything turns grainy, lagging ensues, and pixels get larger and larger. As I espoused, this film doesn’t mess around with its symbolism.

As Alex and Segei’s relationship begins to fall apart, there’s a sense of helplessness that’s felt due to their distance, and more interestingly, their only source of communication: the video chat. Calls go unanswered, startling hang-ups happen with no warning, and communication is even cut for weeks at a time. You will watch a relationship break apart before your eyes in this film, all the while mimicking the physical break between lovers. They may be able to Skype, but touching a screen isn’t the same as touching a person.

The story is simple here, but the interworking of the characters are complex and genuine enough to draw you in and keep you there throughout the film’s entirety. Natalia Tena and David Verdaguer’s chemistry is unmissable, and their portrayed relationship breaks your heart and puts it back together time and time again. 10,000 KM is what romantic comedies should be, if the genre stopped following formulas and truly brought romance and comedy back to the screen. This is a film that doesn’t try to tie everything up pretty with a bow — in fact, it does just the opposite, leaving things in a sloppy mess with questions unanswered and certain character actions left unresolved. By the end, we realize that the 10,000 kilometers have nothing to do with the physical distance between the two lovers and everything to do with the emotional gap that is created in their lives.