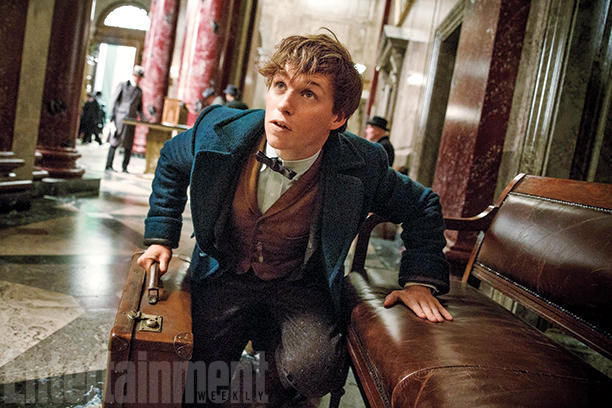 News has still been coming out at a trickle about David Yates pseudo adaptation of Harry Potter companion piece Fantastic Beasts and Where to Find Them — J.K. Rowling’s book is more of an encyclopedia than a narrative, fleshing out the mythology of the various creatures that appear in the series — but we’re finally starting to see some concrete details about the context of the narrative. Yesterday, Warner Brothers released the finished logo and today, Entertainment Weekly has a cover story on the movie this week. While they haven’t yet published the story online, they have shared a gallery of images from the new issue. Details on the plot are scarce, but Eddie Redmayne stars as Newt Scamander as a world renowned magizoologist in the 1920s who works within a secret community of witches and wizards in New York.

The images similarly aren’t particularly revealing, but we do get a look at our lead, Newt Scamander (Redmayne) in a dapper peacoat and the presumed three other principal characters; Porpentina “Tina” Goldstein (Inherent Vice’s Katherine Waterston), Queenie Goldstein (Alison Sudol), and Jacob Kowalski (Dan Fogler) on a train platform that may be the same one intimately familiar to fans of the series. More tellingly, period-specific details abound in these stills from the plush cosmopolitan furniture to the worn gravel streets and roaring 20s’ automobiles. The biggest nugget for fans has to be the cover though, which features Scamander doing his best imposing grimace at the camera, wand in hand, and positioned in front of a gilded entrance to the Magical Congress of the United States of America, the American counterpart to England’s Ministry of Magic.

The Harry Potter series has its detractors, but even the most stalwart muggles might have a hard time resisting the charms of Fantastic Beasts and Where To Find Them, which is filled with both A-listers like the aforementioned Redmayne, but also more idiosyncratic casting choices like Ezra Miller, Ron Perlman, Carmen Ejogo, and Samantha Morton. And while Yates doesn’t have the same reputation as a visual stylist as the previously rumored Alfonso Cuaron, he’s proven himself to be an outstanding journeyman director over the years.

Check out the images below, but first a 30-minute talk with Redmayne for The Danish Girl at TIFF. Fantastic Beasts and Where To Find Them will be released on November 18, 2016.