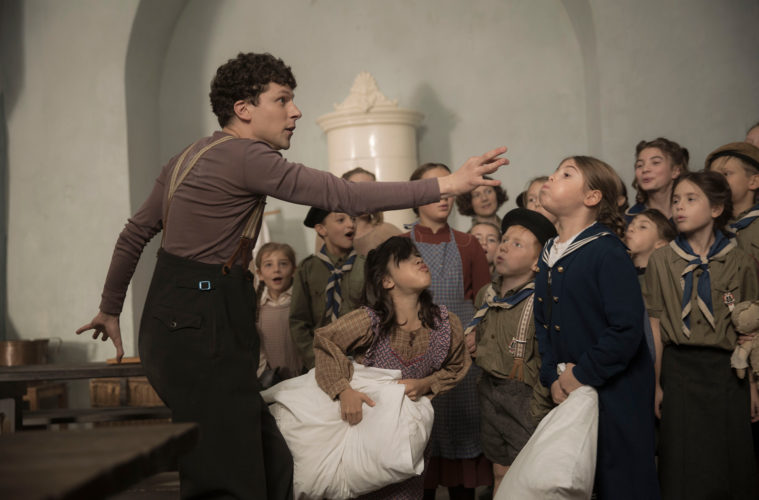 Marcel Marceau’s first public performance was in front of three thousand troops after Paris was liberated during World War II. It wasn’t some USO stunt, though. General Patton didn’t hire the Strasbourg native to give a show because his men needed a laugh. If anything he gave the stage to the as yet unknown “Bip the Clown” as a reward for everything he did as a member of the French resistance and a liberator himself by taking hundreds of Jewish children across the Swiss Alps to freedom. Those kids were his private audience—orphans seeking solace after many witnessed the murder of their own parents at the hands of the Nazis. They’re the ones who softened his ego-driven dream of dramatic stardom to recognize comedy’s unparalleled cathartic power.

As writer/director Jonathan Jakubowicz’s film Resistance describes it, however, Marceau’s (Jesse Eisenberg) evolutionary thaw also involved a woman, namely Emma’s (Clémence Poésy) presence during a campaign to bribe German officials and allow one hundred and twenty children into France under the supervision of a mutual friend. Georges (Géza Röhrig) recruits Marcel because, like the mime’s father (Karl Markovics’ Charles), he interprets the act as being akin to clownery and its potential for laughter was exactly what these kids needed. While shame couldn’t quite get Marcel there after his brother Alain (Félix Moati) joins the elucidatory party to pile ridicule and disappointment upon the actor’s self-serious nature, seeing Emma at the frontline gets him to stay. Recognizing her passion and witnessing the orphans’ fear helps him participate.

This isn’t therefore a strict Marcel Marceau biopic. Much of what occurs does infer upon that stage name and the legacy now affixed to it, but that’s the extent of explaining who he becomes. Jakubowicz instead focuses on what he and his friends went through as Jews hiding in plain sight to resist Hitler’s genocide. And while the filmmaker goes out of his way to make sure we believe everything on-screen is true (there are many interstitials during and after the film to educate viewers and ensure we know exactly what’s going on contextually), he also bookends the whole as an anecdote told by Patton (Ed Harris) during his introduction of the aforementioned performance (a way to excuse any liberties that Jakubowicz might have otherwise taken).

It’s weird to say World War II was necessary for Marcel to find the empathy that made him great, but that’s pretty much the film’s thesis considering he might never have emotionally connected with his father had they stayed in Strasbourg as butchers or won over Emma’s affection had he continued pursuing a career on-stage as though it were God’s mission to do so. That Jakubowicz doesn’t simply highlight this awakening as paramount is thus a welcome choice because moments dealing with it can come off as insignificant when compared to the atrocities of the Holocaust. Resistance is thus at its best when dealing with the suspenseful nature of what rebellion means since Marcel and the others are forever at risk of being caught and executed.

Watching Marcel, Alain, Emma, and her sister Mila (Vica Kerekes) enter the hotbed of Nazi activity that was Lyon is a tense ordeal. Wondering what will happen when some of them are captured can be a nightmarish enterprise thanks to Jakubowicz’s refusal to pull punches on the barbaric lengths the Third Reich was willing to go to assert its dominance. And enduring the uncertain conclusions of passport checks or chases through the woods at night proves riveting throughout. That the man at the center is Marcel Marceau ultimately becomes a trivial matter as a result once the story cements itself as being about so much more than his not-yet-realized celebrity. We’re experiencing four young French citizens going above and beyond themselves to makes a difference regardless of pedigrees.

I believe this was the correct choice even if it risks turning Marcel into a distraction simply by being present. Letting him fall to the background in order to not overtly overshadow the nightmare scenario unfolding is a big part of the film’s success and a mirror that shows how misguided it was to not do the same on the equation’s other side. This is a problem many stories with ubiquitous evils have fallen prey to of late: the notion that something as pervasive as Nazism isn’t enough to stand as an antagonistic force in the abstract. Rather than stick with Resistance being about the heroism shown opposite a wholesale movement, Jakubowicz introduces Klaus Barbie (Matthias Schweighöfer) about halfway through to become a literal target for our ire.

Barbie was a monstrous figure during World War II, but did his actions in Lyon really appear so personally vindictive against Marcel and his compatriots as presented here? Doubtful. Introducing him in a scene with no relevance to the story besides as a means to prove how brutal he is (as though his relevant actions later wouldn’t be enough) only proves it by shoehorning his life (a wife, daughter, and love for the arts) in where it’s not needed. We don’t need him to hate when the situation and what he stands for already has us riled up and pulling for our heroes. Including Barbie therefore diminishes Marcel’s place in the war by turning an act of resistance against Germany into a more specific escape from one man.

That smaller focus is thankfully captivating enough, though. It’s wild what these characters endure in such a short period of time, because of their adherence to the bigger picture that saving Jews hits Hitler harder than killing Nazis. Jakubowicz having Marceau’s coattails to get people in seats is just an added bonus. Poésy, Kerekes, and Röhrig steal many scenes with their emotional investment to their respective roles. Schweighöfer is easy to hate (a fact that renders the decision to humanize his life in order to then make his actions more despicable odder still), and Eisenberg is effective yet again as a “genius” whose pragmatism borderlines on Asperger’s if not full-on misanthropy. If the story itself doesn’t grab your attention, their performances within should.