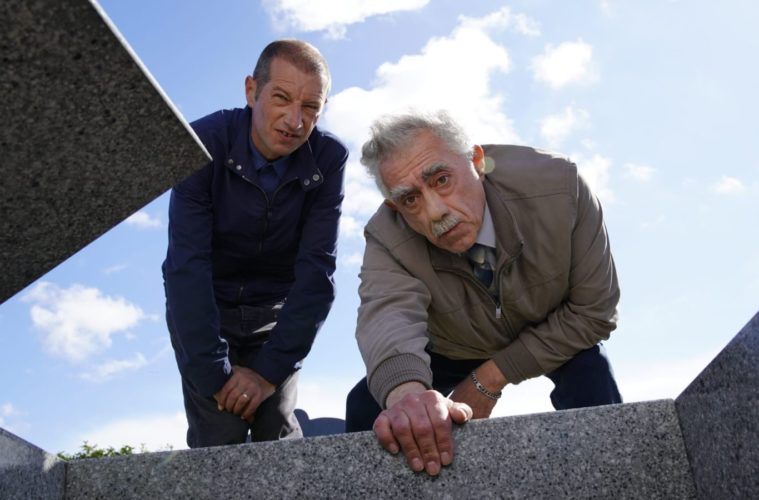 CoinCoin, formerly known as Li’l Quinquin in Bruno Dumont’s film of the same title, is back in CoinCoin and the Extra-Humans (CoinCoin et les Z’inhumains). His name change, like the various physical and learning disabilities of the actors playing citizens of Dumont’s native Côte d’Opale, goes unexplained. It’s simply part of the story. If you’ve seen Li’l Quinquin, you know details like gendarme Van Der Weyden’s (Bernard Pruvost) Tourettes-twitching is constant, used for comedic effect, and as Dumont told the Guardian, “You have to decide whether or not you’re looking at something that disturbs you.”

Like Li’l Quinquin, CoinCoin was made for Franco-German network Arte. Both were broken into four parts for television but screened as one film at festivals. CoinCoin stands alone in many ways, but to understand the last thirty, delightful minutes of the story, you’ll need to see Quinquin first.

CoinCoin and the Extra-Humans takes the tropes and character types from the first movie and accentuates their extremities. If Quinquin was casually racist, then CoinCoin has solidified his ignorance in political beliefs. He’s naturally curious about the civic goings on in Côte d’Opale but his ideas are stunted, based on specious conclusions about the way the world–and his town–is changing. CoinCoin is a less-worldly update on another European boy wanderer-adventurer, Tintin. Van Der Weyden is his Captain Haddock, whose comparison is more apt than the previous one. While Bernard Pruvost’s twitching is more pronounced, pursing his lips like a chimpanzee blowing air anytime he’s exasperated (which is basically the entire time), CoinCoin is more rounded as a character. He’s a xenophobic, homophobic, broken-hearted boy with a hearing aid and disfigured face. Van Der Weyden belongs to the one-note-played-many-ways comedic tradition of Jerry Lewis’s various man-child characters and Peter Sellers’s Inspector Clouseau.

This go-around finds CoinCoin (Alane Delhaye) newly single as his love Eve (Lucy Caron) is now with an androgynous local girl named Corinne (Priscilla Benoist). Adding heartbreak to CoinCoin’s perpetual boredom leads him to Le Bloc, a right-wing nationalist group where he and Fatso (Julien Bodard) act as bouncer/gophers. No sooner than the nationalism shows up on the coast does gunk start falling from the sky. Gendarmerie Van Der Weyden and his gap-toothed partner Carpentier (Philippe Jore) investigate the alien invasion, but just as in Li’l Quinquin, their pursuit is more philosophical than conclusive.

In the final chapter of Li’l Quinquin, young Mohamed (Baptiste Anquez) commits suicide after brandishing his gun at neighbors and the gendarme. Subject to his peer’s racism, Van Der Weyden concludes this led him to Islamic fundamentalism and final despair. But he often misquotes simple aphorisms and ignores complicated thoughts and feelings by reminding himself and others that he holds the authority of law and order. Flash forward four years, the near-dormant black population has exploded into a refugee camp on the outskirts of town near the bunker where much of the first film takes places.

Nationalism has swept the town in response to the refugees. Members of the local nationalist group, Le Bloc, mostly reside in a camping village of all-white residents new to the series. Their own cultural refugee camp, so to speak, grew alongside the refugee camp outside of town. It’s the law of action and reaction at work. But like Van Der Weyden reminds us, he and the white majority control the town. He questions Le Block leaders when CoinCoin and Fatso illegally post fliers for the group around town, but the officer stands down simply because they say they follow the rules. Meanwhile, Van Der Weyden fires his gun for no reason other than to intimidate and disperse a group of black men walking down the street. Like it’s predecessor, CoinCoin offers no overt judgment of ignorance and racism. That the town’s problems are perpetuated by white locals and exacerbated by bumbling, white law enforcement is a kind of judgment, if mostly another depiction of the status quo.

The aforementioned extra-terrestrial gunk shows a kind of agency in targeting latent racist, white townspeople, and law enforcement. The gunk itself doesn’t do anything when it splatters but at night a large light emerges from it and enters various townspeople. The light produces emotionless clones of its white victims. Van Der Weyden repeatedly calls them “clowns” which is an appropriate malapropism. The clones allow the viewer a double-remove from the behavior of the status quo toward the black refugee population. In effect, the clones are a secular-but-spiritual deus ex machina for the town. That’s why the gendarme never solve the mystery of the extra-humans; the mystery was actually racism and indifference to human suffering.

There’s a carnival motif floating throughout CoinCoin and the Extra-Humans. Anytime festival-goers of the never-seen carnival appear, the investigators brush them off or send them away. Dumont says, “The carnival is an inversion of values; it’s a transgression. Taking things seriously totally collapses into a fiesta that becomes a general reconciliation.” The gunk and partiers are ultimately more powerful than the town’s racist overtones. As both interject themselves throughout the story, they prove to have the very power of God on their side. In the final thirty minutes, there is an absolutely stunning reversal of circumstances for Côte d’Opale. I wouldn’t dare ruin the surprise, but an element that was laughable and discarded in Li’l Quinquin emerges from the town’s cultural memory in a moment of forgiveness and reformation.

CoinCoin and the Extra-Humans makes its U.S. premiere at Rendez-Vous with French Cinema on March 2.