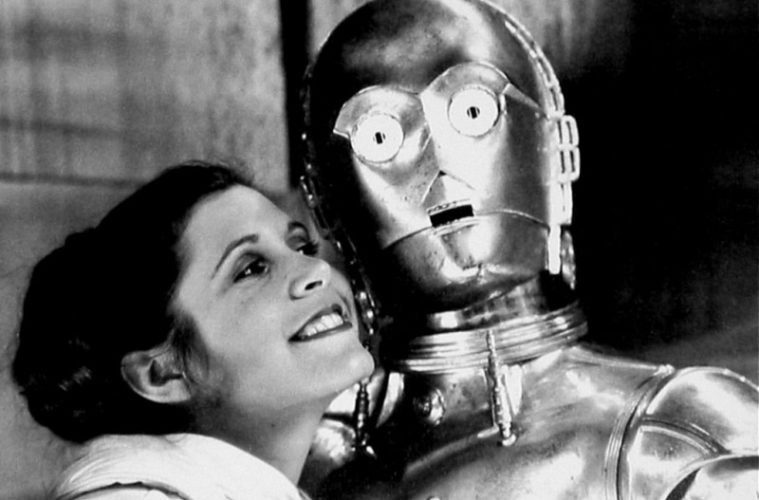 The world of film-related books has been dominated by Star Wars for the last two years, and that’s not a bad thing. With insightful authors like Pablo Hidalgo and gorgeous efforts like Star Wars: Galactic Maps, there has never been a better time to be force-crazed. This month is no exception, but you’ll also find new releases about Hitchcock, the Marx Brothers, and even two involving X-Files prequels. Let’s start with a book that took on new relevance just weeks after its release.

Carrie Fisher’s The Princess Diarist, a hilarious and touching look at her life as Star Wars icon Princess Leia, was a must-read even before the sudden, shocking passing of its author in December. It is even more poignant now. While the book earned pre-release buzz over its revelation of an on-set affair with Harrison Ford, that juicy item is only one of Diarist’s noteworthy elements. Even better is the tale of how she was cast by George Lucas in A New Hope (“George gave me the impression of being smaller than he was because he spoke so infrequently”) and how Leia’s legendary hairdo came to be (she calls it a “hairy-earphone configuration”). Her memories are mesmerizing, and so is The Princess Diarist.

Another year, another must-own Star Wars visual dictionary from DK … The latest, Star Wars: Rogue One: The Ultimate Visual Guide by Lucasfilm creative executive Pablo Hidalgo, is lovingly crafted and smartly designed. The best element of these books is always the level of detail, and in the Rogue One text that means a full spread of Jyn’s childhood toys (I heart “Koodie” the Tooka), a Saw Gerrera timeline, and even a section on those aged Death Star scientists working for Galen Erso. The Art of Rogue One: A Star Wars Story (Abrams Books) by Josh Kushins is a visual stunner that demonstrates how the film’s designers paid tribute to the past (including Ralph McQuarrie’s ) and forged the unique worlds of Eadu and Scarif. It’s also fun to see the evolution of characters like K-2SO, Baze Malbus, and Chirrut Îmwe. Alexander Freed’s novelization, Rogue One: A Star Wars Story (Del Rey), nicely expands on some of the film’s key scenes. Cassian, for example, has a nice moment of contemplation before the final explosion that adds much to his character. Similarly, Jason Fry’s Star Wars: Rogue One: Secret Mission (DK) and Rogue One: Rebel Dossier (Disney Lucasfilm Press) provide interesting tidbits that are sure to help young readers better understand the context of the film. The “personnel files” that make up the Rebel Dossier are especially fun.

For a biography of Alfred Hitchcock, A Brief Life is, well, surprisingly brief at 260 pages. But this economy proves a key selling point for what proves to be a marvelous book. While it covers the Master of Suspense’s entire life, it is the end section that finds Ackroyd’s writing at its most elegant, and most devastating: “He slowly faded away. He lost interest in the world. He refused food and drink. He was cold, even hostile, to visitors. He screamed at his doctor. He turned his face to the wall. He seemed to have forgotten that Alma was still in the same house. Once more he was lying alone in the darkness, with the scythe of death descending ever closer to him.”

Harry Potter spin-off Fantastic Beasts and Where to Find Them was an autumn smash, and seemed to mostly please fans of J.K. Rowling’s beloved wizard. Scholastic released a number of books to tie-in with the film, all geared toward young readers. The Beasts: Cinematic Guide, Magical Movie Handbook, and Character Guide are three above-average examples, as is the lovely Fashion Sketchbook. The latter beautifully highlights Colleen Atwood’s wonderful, Oscar-nominated costume designs. Also nice are four Cinematic Guides, slim but info-packed volumes focusing on old favorites Harry, Hermoine, Ron and Dumbledore. My copies have been heavily read by my 6-year-old, and that’s a good sign.

The life of George Lucas has been heavily chronicled in recent years, but Brian Jay Jones manages to unearth some new pearls in A Life, many of them revolving around the prequel trilogy years. If the early and middle sections feel overly familiar (the teenage car accident, friendship with Francis Ford Coppola, the rejection of THX-1138, the birth of Star Wars), the later period makes up for it with some fresh insights. Among these are details on the conversations between Lucas and Disney’s Bob Iger that resulted in the sale of Lucasfilm. But my favorite is the story of a visit from Coppola during the filming of Attack of the Clones: “Even with more than thirty years of friendship between them … it didn’t take long for the pair of them to fall almost unconsciously into the old familiar roles again, with Lucas playing the padawan to Coppola’s Jedi master.”

Biographical Dictionary of Film heavyweight David Thomson turns his gaze to the small screen in Television: A Biography, and the results are typically fascinating. Disappointingly, there is no mention of Twin Peaks. But there is Thomson on commercials, Thomson on Carson, Thomson on long-form TV drama. Consider his oh-so-Thomson take on True Detective: “That first season was extraordinary, and yes, it was flat-out pretentious. But if that is permitted in all the other arts, why not in television, too?”

Showman of the Screen: Joseph E. Levine and His Revolutions in Film Promotion by A.T. McKenna (University Press of Kentucky)

Who is Joseph E. Levine? You’ll discover the answer in Showman of the Screen, and it should delight you. A producer and marketing genius, Levine helped bring to American screens everything from Hercules Unchained and Godzilla, King Of The Monsters! to The Graduate and Contempt. He was a larger-than-life figure who, McKenna writes, was also “a little man with a bad leg and a big belly.” Showman is a fitting and wildly entertaining tribute.

While it’s classified as a children’s book, any Star Wars fan should consider snagging Galactic Maps. It’s nearly 80 pages of planetary maps (including Rogue One’s Jedha), all gorgeously illustrated, Each page is bursting with neat bits of info. (Who knew Dagobah had “jubba birds” and “dragonsnakes?) And the book opens with a helpful timeline and character guide that, on their own, would be useful. Here, they are sprinkles on top of Galactic Maps’ already delightful Star Wars sundae.

The Art of Selling Movies by John McElwee (GoodKnight Books)

Lovers of old Hollywood and cinema history will be spellbound by The Art of Selling Movies, a 300-page tret packed with photos and vintage advertisements. (My favorites date from the fifties, specifically ads run by small-town newspapers to promote genre fare. One, a spider with a skull’s head, is particularly memorable) Featuring everyone from Valentino and Pickford to Bardot and Hitchcock, this is a wonderfully entertaining and insightful coffee table tome.

Robert Bader’s book highlights a fascinating, little-known segment of the Marx Brothers’ career: the 25 years the foursome spent on stage. He traces the comic legends’ road from live performance (Groucho made his debut in 1905) to big-screen successes, and does so with wit and insight.

It’s a killer idea, really: What were X-Files protagonists Fox Mulder and Dana Scully like as teenagers? Two new X-Files Origins novels set in 1979 explore this question, and the results are certainly intriguing. Agent of Chaos finds a 17-year-old Mulder involved with a missing child, and dealing with the disappearance of his younger sister. Meanwhile, in Devil’s Advocate a 15-year-old Scully must deal with a series of mysterious dreams and a suspicious accident. They’re fun reads, and equally enjoyable is pondering who might play young Mulder and Scully in the inevitable adaptations.