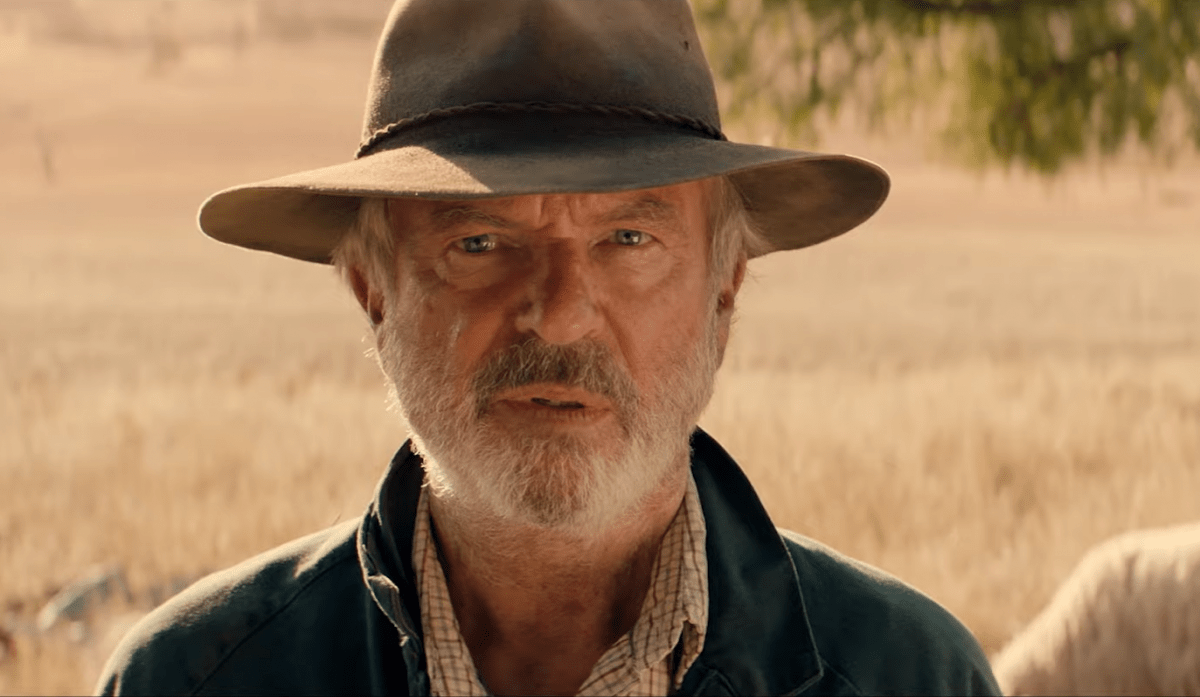 There are few more indelible images in film history than Sam Neill’s massacred face at the end of Paul W.S. Anderson’s Event Horizon: eyes gouged, skin filleted into mincemeat, and that horrific smile enjoying every hellish moment of the pain. Even for those viewers who had seen the New Zealand actor go bonkers in the still unclassifiable masterpiece Possession nearly two decades previous, this was a feat of next level mania.

But for every devil Neill has played there have been countless other good-natured grumps, perturbed scientists, low-key gents, and redeemable recluses. He’s an actor who quietly and humbly represses any lingering internal torment (Jurassic Park baby!). That’s just the case with his turn as sheep breeder Colin in Jeremy Sims’ Rams, an inoffensive but kind remake of the 2015 Icelandic film directed by Grímur Hákonarson.

In the coastal Australian town of Mount Barker, Kalgan Horn sheep are royalty. Which makes all of the hulking rams its kings. This point is hammered home early on when Colin and his estranged older brother Les (Michael Caton) compete against each other in a 4-H-style contest. The winner’s stud animal will help carry on the bloodline with all the local sheep. It’s an honorable distinction in this agricultural hub communicated cinematically by the repeated close-ups of massive ram testicles.

Trading surly looks at every turn, the aged siblings have a deep-rooted hatred for each other that has dated back four decades. Amazingly during that time, Colin and Les have avoided speaking to each other despite living mere feet apart on the same family ranch. Both share a love for the livestock that their father helped bring to the region, but have seemingly drifted in opposite extremes regarding how they approach stud farming.

All of these nuances become moot when Les’ ram is revealed to be suffering from Ovine Johne’s Disease (OVD), a catastrophic and contagious ailment that sends insensitive local bureaucrats into containment overdrive. Quarantines are established at every farm in the valley, and eventually the decision is made to euthanize the entire local Kalgan Horn population. Les responds by delving deeper into alcohol-fueled denial, while Colin takes more subversive and strategic measures.

The resulting narrative looks at how stubbornness can be both a detriment and advantage depending on the situation. With this motif, Rams will certainty appeal to an older audience recognizing their own history of petty feuds and grievances that Les and Colin cling to so religiously. To Sims’ credit, he never gives the brothers big cathartic moments, instead playing their inevitable atonement as a gradual, wordless reawakening of mutual interest and care.

Both Neill and Caton excel at exhibiting cantankerous scoffs and dead-eyed scowls, so it almost feels like a cheat when they rally together around the salvation of their beloved Kalgan Horns. Still, their crotchety chemistry can only take Rams so far. Overall, Sims plays things too safe, even with the raging wildfires that threaten to decimate the town on a seasonal basis. No matter how many calamities reign down from above, it’s never in doubt that the residents of this sheep enclave will be just fine. Their middlebrow fantasy may be charming, but it’s also completely forgettable.