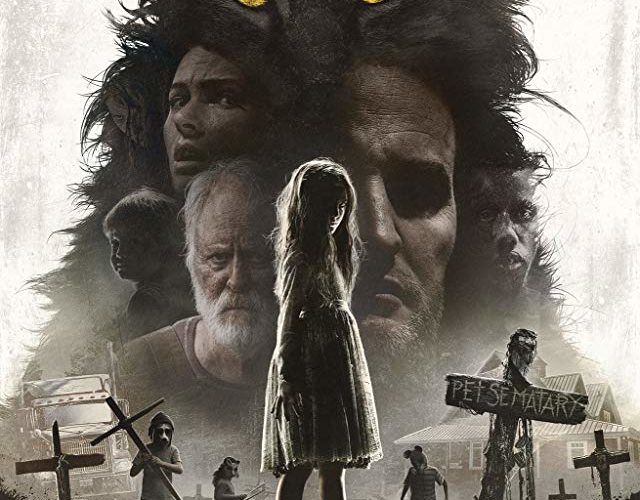 There’s something somewhat hypocritical in remaking a horror yarn about the perils of not leaving something well enough alone. Much like Jason Clarke’s Louis Creed, Kevin Kölsch and Dennis Widmyer’s Pet Sematary disregards any red flags or warning signs to bring the long-gestating Stephen King (re)adaptation back from the dead. The result of this abandon is a sincere examination of grief, coupled with enough knowing, ghoulish fun to not only justify its existence, but also serve as a delightful terror-delivery system.

On an exodus from Boston to their new home in Ludlow, Maine, the Creeds (Clarke, Amy Seimetz, Jeté Laurence, and Hugo/Lucas Lavoie) acclimate to the town’s quieter comforts, only to (surprise!) discover that their home is adjacent to a local burial ground for deceased pets. Upon the untimely demise of their cat Church, their elderly neighbor Jud (an excellent John Lithgow) introduces Louis to the burial ground’s darker benefits–resurrecting the dead. Zombie Church (one of the film’s greatest assets) returns to the Creed home, a decomposed shell of his former feline self, and the devilish shenanigans ensue.

Both King’s novel and Mary Lambert’s ‘89 adaptation (penned by King)–like the undead cat that inhabits them–remain somewhat intact here, albeit with some much-needed tinkering under the skin. To tread into specifics is a minefield of spoilers for those unfamiliar, so forgive any vagaries. Suffice it to say, a potentially controversial swapping of two characters enriches this version in a way so obvious it’s a wonder that King hadn’t done it from the outset. Lambert’s original runs on the fuel of so-bad-they’re-good performances, leaning on schlocky melodrama for its emotional core. Its adhesion to the source material is a hindrance, leading up to a climax that plays exceptionally hilarious on screen. All of that has merit, but less so when those laughs read as unintentional.

In their take, Kölsch and Widmyer’s deviation from certain key aspects of the plot are a liberation. When tragedy befalls the Creed family, it resonates because the characters in question have been allowed some semblance of dimension before the other shoe drops. We’re given a minute to care about their regrets, secrets, and fears, sweetening the film’s diabolical payoff considerably. Aside from swapping key character roles, the final act is certainly not purist-friendly. It plays for (intentional) laughter with a distinct kind of mania, but never loses sight of the deep-seated melancholy that motivates the proceedings.

The tone-juggling final act is borne from very game performances by all involved. In these latter moments, Clarke yields an impressively subdued kind of hamminess, and Siemetz’s reaction to the sheer insanity rampant in her home is a thing of beauty. They’re all hip to exactly what movie they’re in. They sell the madness to the point that Jud, John Lithgow’s sweet-old-man take on the horror flick harbinger, comes off as the only sane soul here. As we’re gleefully whisked into full-tilt schlock by the final minutes, Kölsch and Widmyer are confidently playing an entirely different game, delivering a wonderful spin on Jud’s foreboding mantra that “sometimes dead is better.”

Yes, Jud, sometimes dead is better, but it turns out a twisted bit of reanimation is just what Pet Sematary needed.

Pet Sematary is now in theaters.