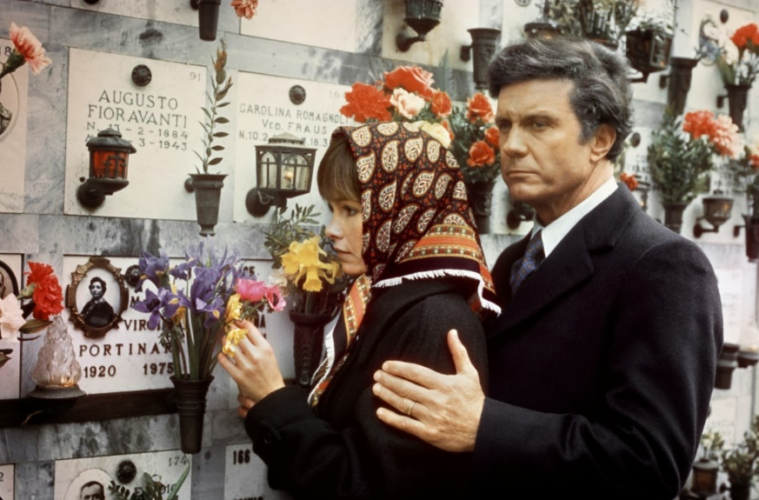 The camera tracks towards a gate leading to a Victorian mansion, the shot coming to center on the home’s front door. It’s the evening and lights are on in the house, tinting the window in the door a translucent yellow. This block of color is interrupted by an alternation of total blackness and person-shaped silhouettes, evoking the action of a shutter masking a frame of a film strip as it passes by the aperture of a projector. This shadow play veils the activity occurring inside the house: a slideshow of photographs. Thus begins the post-opening-credits scene of Brian De Palma’s Obsession. In this reading, it functions as a metonym of the film’s concern with dissimulation, an abiding theme in De Palma’s body of work. Perhaps, in bringing to mind the operation of the film apparatus, this image is also the director’s ontology of cinema.

The home hosting this presentation of records of fond memories belongs to Michael (Cliff Robertson), a humble real estate investor, and his family. The event that sets off Obsession’s narrative is the kidnapping of Michael’s wife and daughter. The police’s effort to rescue them leads to a car chase that culminates in a fiery crash, witnessed by Michael, in which his family is apparently killed. At a site of mourning, it elides almost a generation and picks up in the mid-1970s, the time of this film’s release. Michael ventures to Rome to conduct business. While there, he returns to the church at which he met his wife, Elizabeth (Geneviève Bujold). Drifting through the church in a contemplative state, Michael fatefully encounters Sandra (also played by Bujold), a dead ringer for Elizabeth. Instantly enamored with this apparent reincarnation of his lost love, Michael devotes his time to courting her – or more like stalking, as befits a De Palma film. Sandra submits to his advances, and they return to his home, where they intend to get married. But their plan is impeded by the machinations of Michael’s conniving business partner, Robert (John Lithgow).

Obsession is something like unfinished psychotherapy that positions Michael as the patient. The origin of Michael’s psychic illness is a repressed incestuous desire for his daughter. Evidence for this charge includes the onset of the scene in which Michael’s family is kidnapped. As Elizabeth enters her bedroom, she locks eyes with Michael. Their exchange of loving gazes plays as a portentous anticipation of embrace via zooms and overbearing orchestral music. But the view of Elizabeth from Michael’s position also contains a portrait of his daughter, allowing for the suggestion that his amorous look is directed at her likeness. When the couple do meet, their embrace is relatively chaste: they hug, kiss in a fashion reminiscent of classical Hollywood, and Michael finally places a book between them.

Michael’s infatuation with Sandra resembles the reaction of a patient to the work of analysis detailed by Freud in a paper entitled “Remembering, Repeating and Working Through.” The aim of psychotherapy, Freud explains, is to break down the psychic barrier impeding the patient’s recollection of the cause of their illness. One kind of reaction to this work, writes Freud, is that “the patient does not remember anything of what he has forgotten and repressed, but acts it out. He reproduces it not as a memory but as an action; he repeats it, without, of course, knowing that he is repeating it.” Thus Michael’s courtship of Sandra is not a phantasmatic return to the romantic beginning of his relationship with Elizabeth, but rather a repetition of his repressed desire for his daughter. The Polaroid Michael takes of Sandra on the steps of the church shouldn’t be read as an imitation of the photographs of Elizabeth in the same place that we saw in Obsession’s opening credits, but rather as a kind of screen that separates Michael from a recognition of his perforated memory. This idea of the inextricability of media and psychic pathologies is put forward recurrently in De Palma’s filmography.

Pertinent to this reading is the fact that Sandra actually is Michael’s daughter. In fact, this melodramatically unlikely situation is apposite to both this above analysis and a particular conception of cinema. That a psychic phenomenon – Michael’s daughter as repressed object of desire – has been made flesh accords with the fact that film has been theorized as illusion machine, as imaginary signifier, and that Obsession is both a story inhabited by Michael and the “scene” of his treatment. In terms of the kind of patient reaction to analysis the film brings to mind, “repeating… implies conjuring up a piece of real life.”

Obsession’s final scene stages an encounter in which Michael might be made to grasp the memory of what he has repressed. After learning of Robert’s scheme to bilk him, Sandra’s involvement in it, and her impending return to Rome, Michael heads to the airport to… well, it’s unclear, as the narrative’s cohesion begins to fray. The film shows us, in an utterly hysterical, baroque style, Sandra and Michael headed toward one another. As they embrace, she exclaims, “Daddy!” In this moment, the camera rotates around them, echoing earlier circular tracking shots that accompanied shifts in the narrative’s temporality. This technique, then, institutes a kind of temporal collapse of the repressed past into a present of potential recollection. Upon hearing this confession, Michael is initially deadpan, his external affective state throughout the film. Moreover, the film begins to slow down, as if Michael-as-patient’s resistance to “treatment” has been displaced onto the body of the film itself. He whispers something to his daughter, inaudible on the soundtrack. The corner of his lips open, perhaps the advent of a smile. Here the film’s unfolding is finally suspended; it ends on a freeze frame, a well-known cinematic form of ambivalence. Has Michael’s repressed desire dawned on him? We can’t say for sure, and De Palma, in the mode of auteur-as-unconscious, has perversely withheld our cathectic satisfaction.