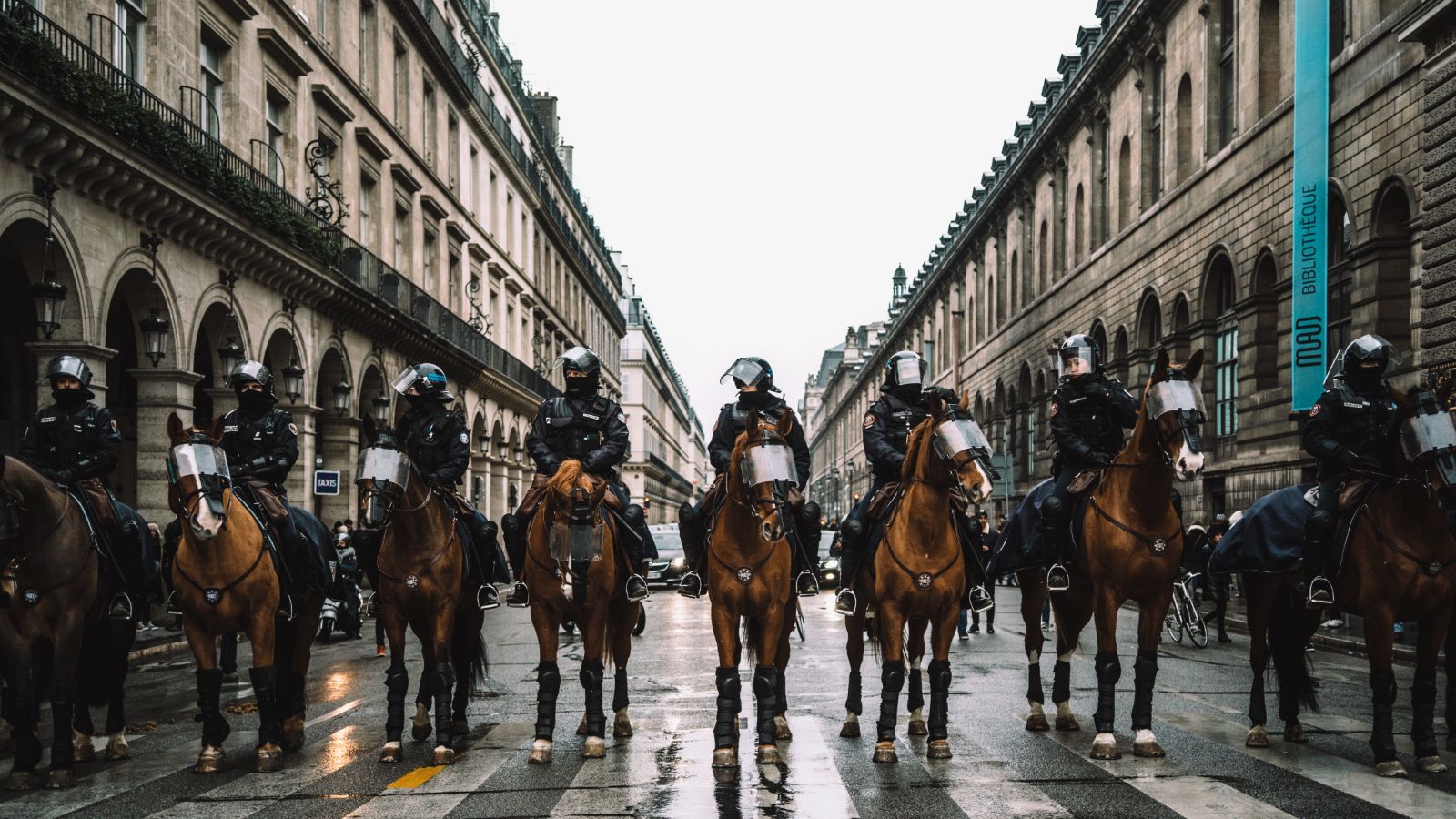 “Scenes filmed in 13 French cities between November 2018 and February 2020. During that period we counted 2 deaths, 5 hands amputated, and 27 eyes lost during law enforcement operations.” That sobering text appears before the end credits of The Monopoly of Violence, a fascinating, conversation-starting documentary from French filmmaker David Dufresne. “Conversation” is an appropriate word here, as Monopoly is centered on two elements: shocking, smartphone-shot videos capturing police brutality against demonstrators and one-on-one conversations between sociologists, lawyers, police union officials, and demonstrators, among others.

The resulting film is an exhausting experience, but resonant. Perhaps such a document should be exhausting. Dufresne’s project both observes and comments upon the gilet jaunes (“yellow vest”) protest movement. This period of large-scale demonstrations drew worldwide coverage, yet many in the United States may have forgotten this ongoing news story from less than two years ago. The U.S., after all, has police violence issues of its own at this very moment, to put it mildly. There are certainly parallels between what occurred in France and what is currently happening in the U.S., though this link is never explicitly discussed. Monopoly does not shy away from exploring issues of class and race; disappointingly, however, the majority of onscreen commentators are white men.

Their commentary simply cannot compare with the power of the images Dufresne shares throughout. “The images speak for themselves,” says one commentator, and it is difficult to argue that point. To his credit as a filmmaker, though, Dufresne’s goals are more broad than simply sharing vertical iPhone videos of brutal police violence against demonstrators. He is also intent on listening to conversations about the state’s “monopoly on violence” and observing the reactions of these commentators as they view the same videos audience members are watching. This footage is seen on larger-than-life screens that dwarf the onscreen participants.

Language itself is put under the microscope here. In one of the strongest scenes, a female demonstrator speaks after we see footage of her being hit with a baton. She examines what violence means beyond our usual use of the word. “The French state is violent. Their words and reforms are violent,” she says. “It is violent to be lied to by your president.” Demonstrators, she explains, are risking their jobs, their children, and their lifestyles. Her words, coupled with the footage of her under attack, are more powerful and more impactful than those of the (often insightful) commentators seen and heard throughout. Her emotions and her pain are unquestionably real. The same is true of the other demonstrators who appear on-screen; the first individual we see, at the start, is one of the twenty-seven who lost an eye.

This is not to say the emotions of other commentators aren’t real, or their words not compelling. But these figures mostly feel like outsiders. Their comments are genuinely engrossing, if also rather studied. Meanwhile, riveting sequences of demonstration and law enforcement tactics leave a dramatic impression. We watch as hands are blown off. We see the pain of demonstrators shot with flash-balls. There is even a compelling moment in which a now-aged veteran of the 1968 protests berates the armored police: “You’re parasites on the nation, nothing more … in 1940 you served the Germans.”

It is worth noting that Dufresne includes police officers among his lineup of speakers, and the concept of the police as victims is put forth at multiple points. (“Police are being sacrificed by the politicians,” says one commentator.) Mostly, though, there is agreement among the talking heads. Their words are never boring, but often repetitious, occasionally dull. Is this an intentional gesture? That’s up to audience members to decide. But there seems to be an argument that no matter how the issue of state violence is discussed, debated, or considered, there is no arguing with street-level footage. A note just before the end credits salutes the brave individuals who managed to shoot video during these moments of chaos: “Thanks to all those amateurs and professionals who raised their smartphones and made this film possible.” It is this footage that makes The Monopoly of Violence a work of tangible, visceral power.

The Monopoly of Violence is now playing nationwide at NYFF58 through Wednesday, September 23.