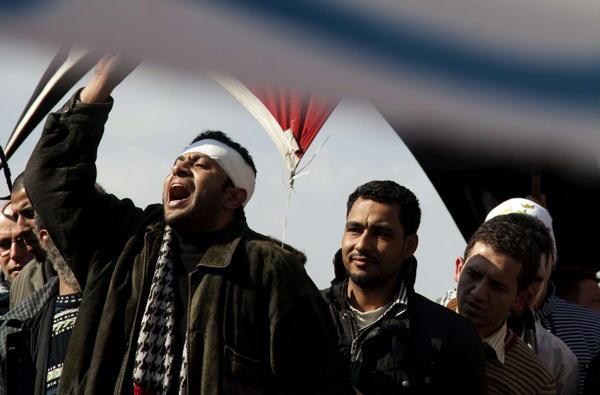 The most striking emotion you experience watching Tahrir, the cinéma vérité-styled documentary directed and filmed by Stefano Savona, is joy. And not just when the Mubarak regime is toppled, ending thirty years of authoritarian rule, but from the very first time we enter Tahrir Square, joy is written over every face. In some ways, the act of congregating together, of shedding all the political shackles and sharing a dissenting opinion with each other, was a victory unto itself.

But that would shortchange a group of people acutely aware of what they were doing, of the goals they were going to achieve. This immersive experience puts you shoulder to shoulder, face to face, with the brave Egyptians who took to the square and claimed it their own. One person remarked, “Tahrir Square is our homeland,” and the film treats it as such. We are entrenched with the people on the ground until we get a rare shot from above of the crowd, giving us a crude sense of chronology from when Savona entered the square on January 30th and the inevitable fall of Mubarak. Time passes as the crowds grow…and grow…and grow.

For the majority of this film, you’d be hard-pressed to think they weren’t outtakes from Woodstock. There are jokes made, laughs shared, and tons and tons of call-and-response chants throughout the crowd, incessantly clapping, letting everyone know that they’re still there. It feels like a big freedom party where everyone is invited. And by everyone, I mean everyone: grandfathers, teenagers, middle-aged housewives, entire families, of all different creeds and social standing.

Like-minded individuals from Suez to Alexandria come together around a camp fire telling their version of ghost stories: the economic failures of this patriarchal system that have failed them, the starvation that they see all around them, the failure to get a job anywhere in the country. It soon becomes clear that these people are not just finding each other, they’re building the basis for their new homeland, one that will expand outward from the newly-dubbed “Liberation Square” and extend to its borders, with its sentiment carried throughout the world.

This fact not lost on those involved. Everyone seems acutely aware not just of how important their mission is, but that they will surely win. Over and over, you hear of the importance of them holding the square. “We leave when he leaves,” was one of a few common chants that would ring out, day or night. Seemingly everyone had a camera phone to document the proceedings, a laptop to scream the news, or a TV and satellite hook-up to catch the latest development that they’re forcing. They even switch up the chants to English (“Go To Hell!” “Freedom!” “Game Over!”) just to keep things fresh. If their presence wasn’t enough to enact change, their will would make it happen.

Mirroring what it would be like to be in such a large crowd, there seem to be a thousand faces that are clearly imprinted on the film, but we do get to follow a few. Noha, Ahmed, and Elsayed are all young, lower-middle class, and well educated and versed in the political structure of Egypt (especially in its failings). The film is punctuated by conversations these three have with each other and those around them about the state of the government at present, what legislation should (must, will be) passed in order for this change to work, and exactly what their goals are: a secular state, uniting Christians and Muslims alike. In this they will not waver.

Through the film, if they are not discussing these high-minded ideas with their peers, they take the time to educate others on the propoganda of the regime, aiming to enlighten one Egyptian at a time to their true power. It’s a fascinating document, watching generations become radicalized and passing it down throughout the rest of the people who have bonded with an incredible kinship. The rich chant about how a pound of lentils cost ten pounds – how can the poor eat? As more and more people pile in to the square, they are greeted with chants and songs like a football team making their way on the field for homecoming. And, in many ways, it is.

That’s not to say that everything was peachy. About halfway through the film comes what is now called “The Day of the Camels,” when Mubarak turned prisoners loose to attack the protestors in the Square with knives and camels, insults and rocks. The revolutionaries then used the Square to their literal advantage, breaking up pieces of the tiled sidewalk and hurling them at their foes, with rocks flying through the air like arrows in Robin Hood films. One gripping shot follows a woman who takes up a tile’s worth of stones and carries them to the “front” as bloodied Egyptians are carried back the other way. It seems that their makeshift cardboard helmets are not exactly the best protection. Finally, some of the offenders are captured and interrogated in a dark, dingy room with just one bright light cutting through, making real a series of film conventions. After the confession, gained easily, you don’t see what happens to him. I don’t think I’d want to.

To judge this strictly as a film would be a disservice to the action these people participated in and to the work that Savona put in to capture this moment as it occurred. This is a social document more than a commercial or critical work. There are parts that are sloppy and dangle a bit too much, such as a monologue delivered by a man in his early 60s who goes on and on about the importance of the event, even stopping the people around him from clapping when they think he’s finished. And while the duration of the screed is long and drags the film down, the very fact that he’s able to say this in public is so moving that you’ll take the hit on a film’s overall flow.

When Mubarak finally steps down, it comes out of nowhere, as it should. Suddenly, he’s out of power, suddenly everyone’s dancing, and then suddenly it’s daybreak. The war has been won…at least temporarily. As the credits begin to roll, one young woman is appalled at the people around her picking up their stuff and going home. She cannot believe that Mubarak won’t return, that this isn’t some elaborate ruse, that the army could actually be trusted. The girl doesn’t leave, nor do a few others around her, starting up yet another chant about how they won’t go.

No matter how the rest of the revolution plays out, we will always have this first-hand account of a moving, important moment in our collective history. But judging by the will of the people, one can’t imagine it can go any other way but theirs.

Tahrir is now screening at the New York Film Festival.