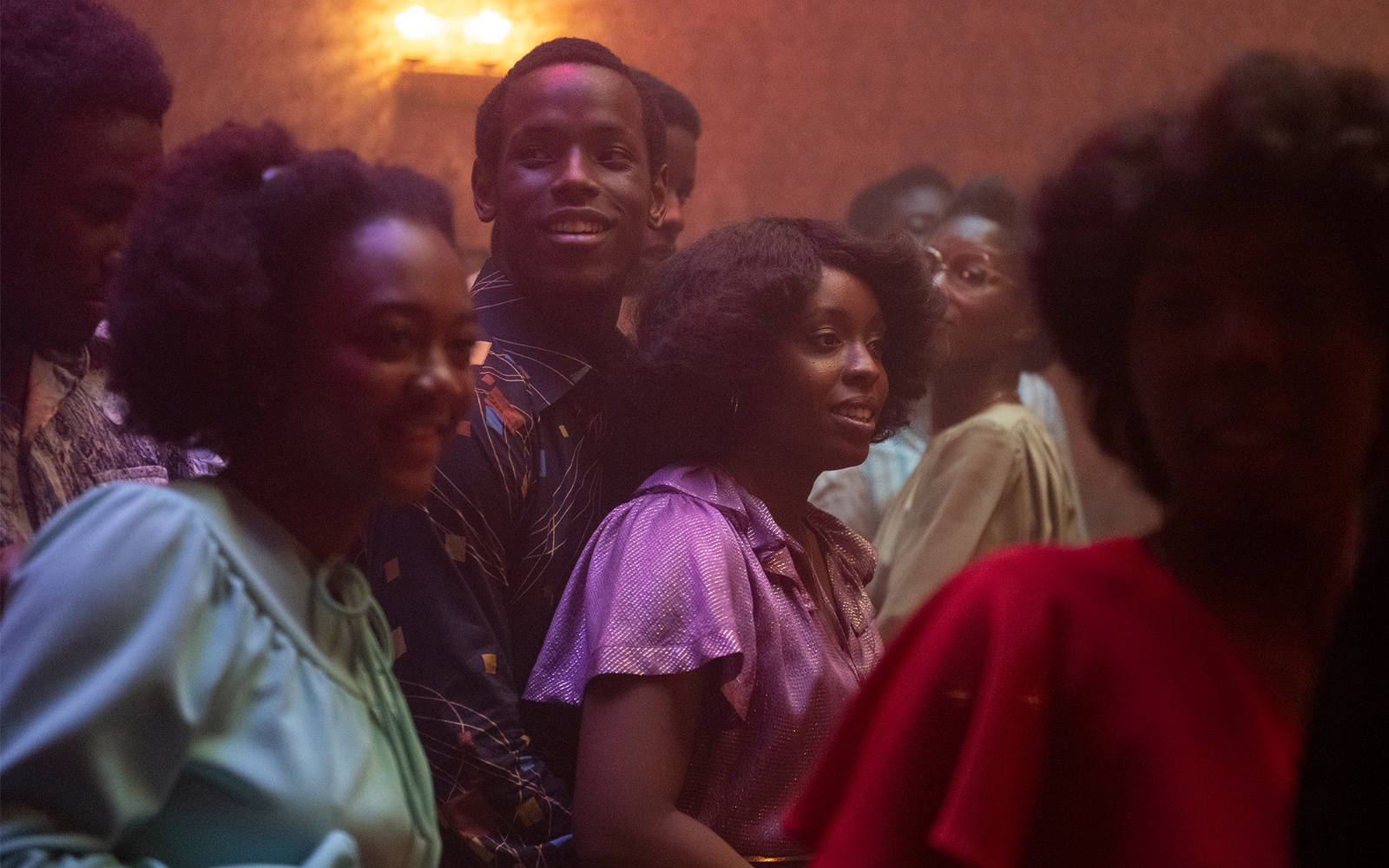 An appropriately buoyant opening-night choice for this year’s New York Film Festival, Lovers Rock chronicles an underground London blues party, a space where Black Brits could cut loose and dance safe from white harassment. Director Steve McQueen presents the house party as a mostly utopic place, one maintained and policed by community committed to the ideals of spiritual liberation. The film’s fluid, handheld camerawork, courtesy of Shabier Kirchner, foregrounds positive vibes, detailing every inch of the tight dance floor and basking in the glow of unencumbered joy. These gatherings represent a release from a socially and politically marginalized group, but that subtext merely pulses underneath Lovers Rock, contextualizing the film without ever overwhelming it. The organic community portrait ebbs and flows to a beat of its own making.

McQueen’s immersive approach comes alive in Lovers Rock’s extended dance-floor scenes, Kirchner’s camera swirling and gliding through the room in long, uninterrupted stretches. His focus remains squarely on the mélange of bodies, primarily defined in relation with each other, but Kirchner seamlessly shifts attention across multiple areas of the human form. Sometimes he concentrates on faces, each in their own state of stoned ecstasy. Other times it’s people’s feet stepping and moving to the groove, always squarely pointed at potential partners. In an extended sequence soundtracked to Janet Kaye’s “Silly Games,” Kirchner and McQueen direct all attention to waists as they sensually bump and grind to the rhythm, massaging against each other, intimating and simulating public desire. The film’s title refers to the popular reggae style, which filters softer, soulful vocals through the genre’s patented thick-bass sound. Subsequently, romance emanates from the sound system and connects to the ardor blossoming on the dance floor.

Lovers Rock mostly decenters individuals in favor of its ensemble, rendering all characterizations lean and spare. Still, McQueen and co-writer Courttia Newland feature Martha (Amarah-Jae St. Aubyn) and Franklyn (Micheal Ward), who initially meet under inauspicious circumstances at the party but soon fall hard for each other under the spell of music. Both St. Aubyn and Ward are both compelling, their on-screen chemistry crackling at all crucial moments—particularly in the film’s final stretch when McQueen follows them post-party. Lovers Rock does become slightly more ordinary whenever it cuts back to its audience surrogates or introduces external narrative tension, e.g. a sequence involving an attempted rape thwarted by Martha and Franklyn at the last minute. McQueen and Newland thankfully keep these comparatively rote moments to a minimum, preferring to direct most of their attention towards the revelry in which they actively participate.

Lovers Rock is the first of five films in McQueen’s Amazon anthology series Small Axe, which tells stories of West Indian life in Britain from the 1960s to the 1980s, the period when Black British consciousness and diasporic identity rapidly crystallized in the wake of post-WWII mass migration. The other two featured in NYFF’s slate, Mangrove and Red, White and Blue, almost certainly promise to more directly address the systemic racism that plagues the community, but Lovers Rock keeps that threat in the margins. (That said, its few white faces embody menace or authority—the type keeping the subjects of Lovers Rock perpetually uneasy.) McQueen actually emphasizes religion as the ominous presence in the room: every cross that appears onscreen, either mounted on a wall or dragged through the street by a dutiful man, represents the conditioned guilt baked into even the most carefree of evenings. It’s telling that many partygoers will likely have to face a church service in the morning.

Before then, however, McQueen luxuriates in seemingly unrehearsed merriment, capturing the sheer thrill of a DIY spirit that thrives outside of society’s sententious gaze. He particularly highlights this in more muted pre-party scenes as the men carefully set up the elaborate sound system—analog fetishists will get a kick out of the process, especially the glorious moment when the music first comes through all the speakers—while the women cook and sing in the kitchen. The lengthy a cappella rendition of “Silly Games” that spontaneously rises from the crowd is a chill-inducing highlight, but Lovers Rock reaches its true fever pitch near the party’s end when the remaining dancers get down to the Revolutionaries’ “Kunta Kinte.” Kirchner’s camera perfectly reflects the dancers’ reckless, rowdy nature. He constantly adjusts focus depending on who’s playing strongest to the camera, but still captures the crowd’s splenetic movements as a whole, on both vertical and horizontal planes. It’s a moment of true, thrilling catharsis, encapsulating the ensemble’s boundless pleasure and righteous fury just before the dawn of a new day.