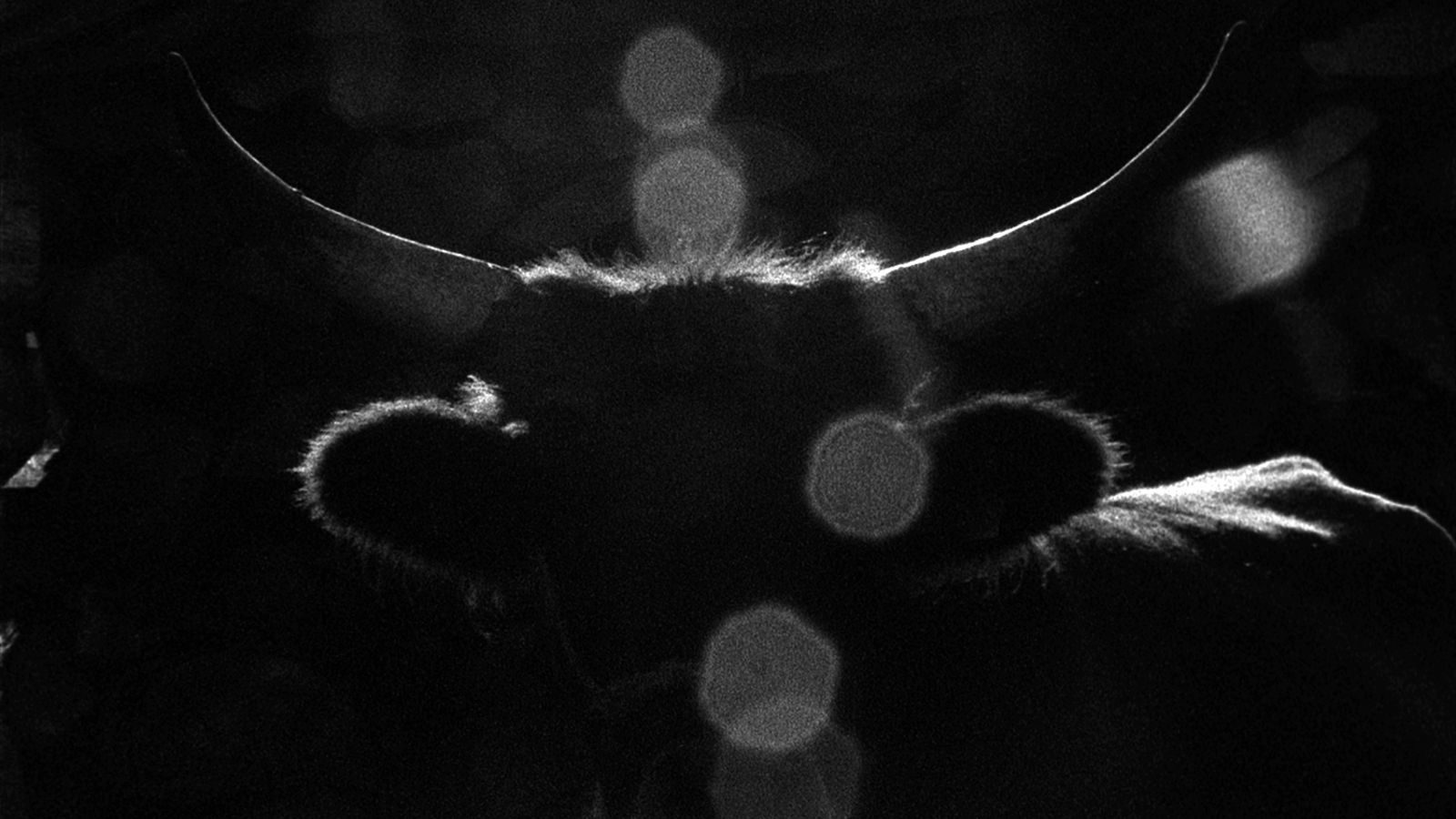 Humans want to believe in meaning and mystery. At times, an overwhelming sense of certainty can fill one’s mind––about an idea, a truth, a religion, or a significance in the sightings confined within daily life. Her Name Was Europa explores this certainty in the context of the aurochs, an extinct breed of wild cattle and the people hoping to resurrect them. Filmed, or constructed, by Berlin-based OJOBOCA––the filmmaking duo of Anja Dornieden and Juan David González Monroy––the documentary looks at the scientists, artists, and history surrounding these animals, and the mythological powers they might or might not embody. Like the rest of us, these humans have dedicated their time to believing, proving, reshaping, and reimagining something that no longer exists.

Opening on black and white images of slow-moving animals and text typed on white pieces of paper, Her Name Was Europa, like its subjects, meanders towards its conclusions. You’re put back into high school history classes, watching a PowerPoint presentation without context or initial necessity. Shot on 16mm black and white film, OJOBOCA’s latest is more of a project than a straightforward documentary. The history of the aurochs unfurls itself through conversations with current stakeholders, those in the world especially in Europe, concerned with the status of these creatures. At only 76 minutes, the film still decidedly takes its time, even going so far as to tell its audience that their footage was corrupted, and so they had to shoot at a doctor’s lab a second time. OJOBOCA hopes we’re along for this ride, even if it isn’t the most thrilling attraction.

The filmmakers show different photos of animals periodically throughout the film, from monkeys to giraffes to cattle themselves, providing quick bookends between the human subjects they’re exploring. We watch an artist draw an auroch, while discussing each unique feature. We see another crafting a mold of an auroch’s head, attaching it to a full mold of the animal, and putting it into nature for a photoshoot. It’s odd to watch these people dedicate inordinate amounts of time to the non-living, the nonexistent, and the long-forgotten. That’s what we all do, though. We pursue what we believe to be interesting, and more often, what we deem to be important. It’s a lesson taught on action and inaction, and the question that seems to pop up more and more within our technology-focused culture: Because we can, does that mean that we should? Should ability equal action, and what are the impediments to this brand of progress?

The last 20 minutes represents a change in tone, though, as the filmmakers decide to bring Europa, the constructed auroch, to a theme park resort outside of Berlin called Tropical Islands. Built in a massive airplane hangar, originally planned for the never-completed world’s largest airship, Tropical Islands remains the largest indoor water park on Earth. Immediately after arriving, they abandon their idea, citing that they “lost interest” and instead having piña coladas on a fake beach. This fictional ending dissipates into thin air, replaced by moving images of kids running around a water park inside a manufactured resort, one created after another person lost interest, money, necessity, or some combination of the three.

All that remains is the mystery of the aurochs. The film, and the filmmakers’ journey, just fades, much like the aurochs’ existence. With a lack of interest and cold drinks in hand, OJOBOCA ended a preoccupation with an animal that most people haven’t considered or even uttered its name. Aurochs might fade in the mind of the filmmakers and audience members, but they will stay the focus of a select few, like all great mysteries, myths, and particularly special items in this world. Her Name Was Europa isn’t shifting your attitude toward a common cause or belief, instead forcing an examination of your own fascinations. The film never attempts to answer these questions, or the larger ideas it glides over. Rather, it presents a sense of history, a false sense of reality, and our human obsession with recreating the mysteries of the past.

Her Name Was Europa is playing nationwide at the 58th New York Film Festival through Sunday, October 4.