NYFF Review: ‘Born to Be’ is an Enlightening Look at Transgender Care in NYC 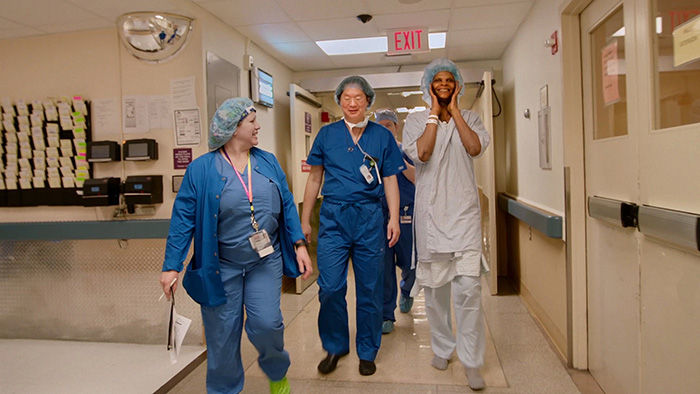 How does a self-taught upright bass player who dropped out of Julliard to pursue his parents’ dream of medical school become a bona fide superhero? Easy. He raised his hand. Dr. Jess Ting may have graduated at the top of his class and found success as a New York City plastic surgeon, but none of that compares to the courage and humanity shown when agreeing to lead the newly-formed Center for Transgender Medicine and Surgery at Mount Sinai Hospital. The position was created in 2015 as a response to state requirements declaring that all health insurance plans must now cover gender-affirming surgery and everyone else said, “No.” More than that, they wondered why Ting said, “Yes.” Think about that. They couldn’t understand why he wanted to help people.

If they haven’t figured it out yet, documentarian Tania Cypriano’s film Born to Be should enlighten them. She follows Ting as he establishes his base of operations, earns a community’s trust after decades of settling for unsanctioned surgeries, expands his staff due to growing demand, and revolutionizes procedures despite being the “new kid on the block” who himself was trained barely a year earlier. With unfettered access to the consultations, procedures, and follow-ups of multiple patients, Cypriano gets to the heart of what vaginoplasties and phalloplasties mean to those pursuing them and the empathy and understanding Ting provides along the road towards helping them achieve the body they deserve. And we’re also made to recognize how the hope this battle against dysphoria provides doesn’t automatically win the war.

While that hardship and struggle is very much on display, however, the film nevertheless has an exuberantly infectious life to it. Ting himself is an awkward, self-deprecating man that the camera lovingly lingers on to capture his real-time hilarious, mouth agape reactions to certain inquiries that call to mind faux documentary sitcoms like “The Office”. And his patients are a colorful group of men and women who cannot help themselves from smiling ear-to-ear at the opportunity to make their dreams come true. Whether it’s twenty-something transgender woman Garnet Rubio desperate to look in a mirror again or aging “queen” Cashmere Vassor readying herself to fulfill her destiny when so many couldn’t (“Like Paris is Burning? Everybody in that tape is dead.”), the unbridled optimism overflows. The excitement surrounding scientific discovery does too. Ting goes through a layman’s description of the surgeries he’s conducting (we’re there for his first unassisted vaginoplasty and phalloplasty) and it’s wild to comprehend the logistics of them. The old ways are awe-inspiring on their own as far as creating working vaginas and penises from skin grafts, nerve endings, and arteries originally located on different parts of the body, but the new ideas he brings to the table are more so. Ever since one of his earliest cases committed suicide before their scheduled appointment, Ting has understood the heavy cost shouldered by the transgender community and his responsibility to it. He knows shaping a penis out of forearm tissue forever marks a patient. So why not figure out an alternative?

Beyond the intrigue on the medical side, however, lies the human side’s fragility. That’s where the song and dance, pre-operation enthusiasm shifts towards the truth of depression, setback, and suicide. These new bodies helping their owners feel comfortable in their skin for the first time ever doesn’t erase external bigotry and hate. So someone who finds herself born anew can still fall. Someone willing to be a trendsetter and undergo Ting’s latest idea can still be disappointed. Not everyone is like Mahogany Phillips (her backstory is crazy, her disposition uplifting) with a smile she couldn’t remove if she tried. These doctors and patients alike are learning on the job and that renders the exponential increase in demand daunting just as the initiative proves a resounding success.

We’re therefore watching history be made with a sympathetic and respectful eye to everything that entails. With the new experimentations comes a new generation of surgeons to ease Ting’s load and ensure this section of our population isn’t forgotten again. The success of men and women of all ages means fielding calls from fourteen year olds wondering what they can do now to prepare for the very real future of being themselves that awaits. It means something too to have their stories told with their perspective forever paramount. Not only does the Mount Sinai Hospital staff take care to capture pronouns for every prospective patient they see, Cypriano does the same to ensure we know her subjects for who they are rather than who they were.

Born to Be screened at the 57th New York Film Festival.